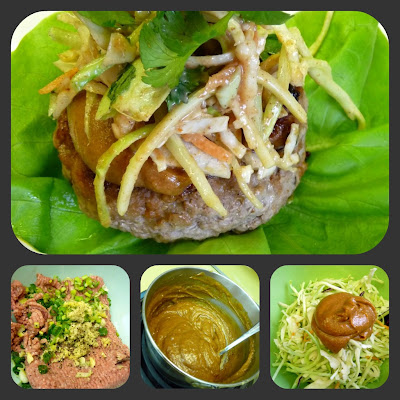 I’m just going to throw this out there:  Satay sauce is next to Godliness in my humble opinion.

It’s creamy, nutty and sometimes spicy — and really what more can you want from a sauce? Just typing that made my mouth water.  The only two problems I have with it?  The peanuts make it very un-Paleo (Peanuts are a legume and not actually a nut…who knew?) and there is generally some type of soy sauce in it which I avoid like the plague (mostly due to gluten).  So while I occasionally throw caution to the wind and order if I am out, I wanted to make a version that I could eat anytime and know I wasn’t  deviating from the style of eating that has kept me happy and healthy over the last year.

I set out to make a sauce that would hit all the same notes as a good peanut satay (and would be a nice dipper for chicken) but also because I am lazy on most weeknights (shocker!) I wanted to find a way to turn it into a burger.  Burgers = King of Easy Weeknight Recipes! Everybody knows (said in my best Phaedra impersonation) that if you are looking for a good burger recipe, Rachael Ray is a great resource.  She’s written something like 1000 burger recipes so whenever I’m in a pickle I seek out one of her recipes.  This time I used this recipe as inspiration (and did some tweaking to satisfy my own dietary needs.)

The results were PHENOMENAL.  I have to admit this surprised me a little.  I thought for sure it would be edible, but I wasn’t certain I would love it.  I only had turkey on hand and I thought it might be a weird combination, but it actually works out awesome because the creaminess of the sauce lends well to turkey because and its low fat content.  The toppings give a great texture combo and overall I LOVED IT!  I hope you will too.

for burgers
Fat of Choice (I used coconut oil on this one)
1.25 lbs of Ground Turkey


for garnish
1 Bag of Broccoli Slaw (My favorite thing to have in the fridge! So useful!)


1.  Heat fat of choice over medium in a 12 in skillet (or you could grill these — I just chose a pan because I’m lazy, remember?)
2.  In a medium sized bowl, mix all ingredients through salt and pepper.  Form into 4 patties.
3.  Cook patties for 6 minutes one side, flip, cook 3 minutes on the other side so that the surface gets brown, then cover and continue cooking until inside is desired temperature.  I like my turkey fairly well done so I cooked it another 5 minutes covered.
4.  When turkey is almost done cooking, in another small pot, combine almond butter and coconut aminos over medium low heat.  Stir until combined and then add chicken broth little by little until sauce has desired creamy consistency
5. In a separate bowl toss broccoli slaw with a few TBS of satay sauce
6.  Serve cooked burgers on butter lettuce garnished with a dollop of the satay sauce as well as the sauced broccoli slaw
7.  Enjoy your super rich, spicy Paleo-friendly satay dish!

The flavor is so complex considering the ingredients are so simple and it has become a great way to fancy up your everyday turkey burger.  If you end up trying this let me know how you like it!
____________________