Poor Garrett. I have roped him in to another one of my crazy schemes! I am lucky he is such a good sport. Let me tell you all about it so you can sympathize with him — but keep in mind I cook him really delicious food all the time so it’s not like I only bring the crazy to this relationship! 🙂

I mentioned that part of my fitness goals this year include running more. While I’m not sure I will ever identify myself as a runner — not because I don’t think I have the skills but mostly just because it’s not The Thing I am passionate about — I have to admit training for last year’s half marathon and the metrics involved in that just really made me happy. I enjoyed just about every aspect of it so I wanted to see where that would take me this year. I planned to run another half marathon and specifically on some pace goals, but then a friend at CrossFit threw out the idea of putting a team together to run The Relay, and like a crazy person I thought, “Hey. We should totally do that!”

If you’ve never heard of The Relay it is a 200 mile run done in 12 person teams that starts up in Calistoga and ends in the Santa Cruz Mountains. The race is broken into 36 legs and each team member runs 3 legs. We are doing this May 4-5 with 10 other members at our gym and we will get to run through 36 cities including the Napa Valley, Marin County, a night run over the Golden Gate Bridge, through the South Bay and finishing in the Santa Cruz mountains.

Sounds a little nutso, yes? But also — pretty freaking fun, right? Oh how my perception of fun has changed in the last few years! 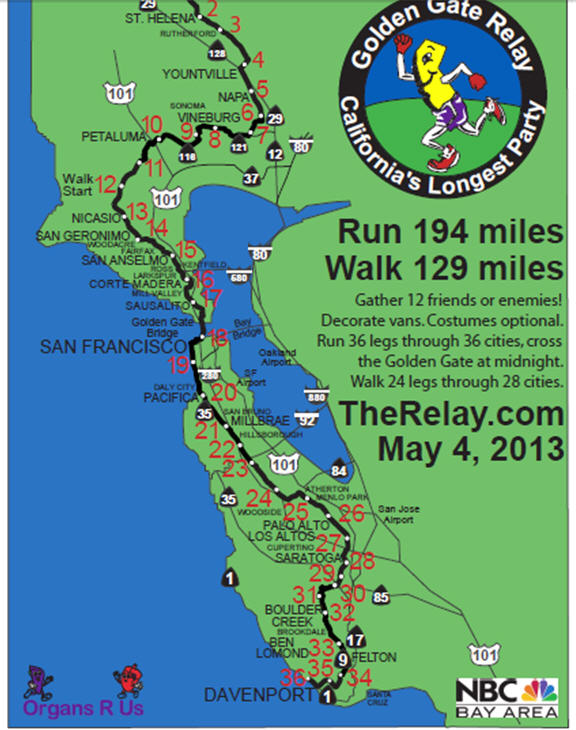 The total mileage you run depends on the leg that you are assigned but it ranges anywhere from 12.6 miles to 18.5 miles, with varying levels of difficulty in each course. For example just because a leg has less mileage doesn’t mean that it is easier as some of lower mileage runs are straight up hill or in particularly windy areas. There are definitely many things to consider with respect to your own capabilities and the strengths of your team. I’ll be the first to admit that I was a little nervous coming into this as a complete novice and not a very strong runner, but luckily my team is not concerned with competitiveness and really just concerned with having fun. Obviously it’s the only way I would do it!

For some perspective, here is how all the legs shake out – and I love how it ranks it by level of difficulty. 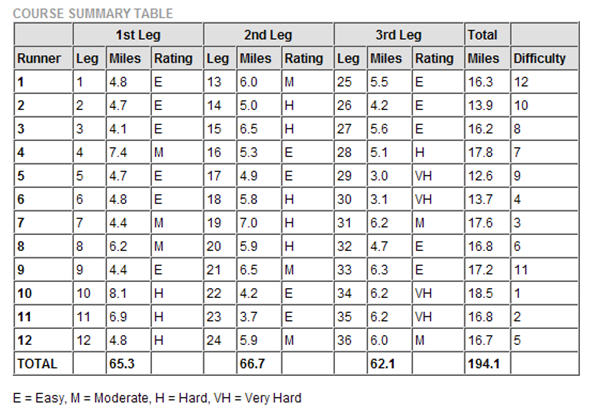 Initially I felt fairly comfortable with the mileage. Since I had completed a half marathon (damn it still feels good to say that) I knew that I could run 13-ish miles comfortably (Comfortably! Ha! That’s funny.) But it definitely gets dicier when you consider that challenge of this event is that you don’t run it all at once. The legs are broken up and in between you are either sitting in a van for hours, chilling at someone’s house, or trying to get some sleep. (PS — Do you live on that route? Want to host Garrett and I for a nap? ha) So training for this will definitely involve more than being able to run 16 miles in a row. It’s more accurate to say, can you wake up and run 6 miles, go to work, come home and run 6 miles and then get up again the next morning and run another few miles. And THAT, is a whole other beast. But one I’m excited to train for.

Oh how cute, to think that I would actually have one already. BAHAHAHAHA. I do not. But I will tell you my approach for now. The first thing is, I’m not trying to be a hero or anything. I am pretty up front that I would like an easy route. Yes running over the Golden Gate sounds nice, but not if I have to spend the last 3 miles of my race running straight up hill. I’m smart enough to know that I’m not ready for that yet. So – easy route, yes please!

Second, I am going to spend the next couple of months really working on my speed. I don’t know how much this will really affect my overall experience, but I would like to be running faster, more consistently before I start doing distance training etc.

Third, I am basically accepting all of the help from anyone who is willing to offer it. Our friend Matt (hi Matt!) has run this race multiple times and he has given us some great insight. My friend Lesley (hi Lesley!) is doing all sorts of running this year and so we are going to hook up to do some running together and she is mucho experienced and also willing to help mentor me a little bit. I LOVE MENTORS! I AM A MENTOR NERD! Plus, all of my teammates are going to be doing some group training so I look forward to enjoying the camaraderie and skills that this will bring with it.

Lastly, I want to keep this fun and I plan to really focus on that. This shouldn’t be stressful and instead should just be an interesting, albeit personally challenging, thing to have on the calendar. And you know how I love stuff like that! Also, we plan to stay down in Santa Cruz after the run is over for a bit because it is Garrett’s birthday weekend and why the hell not celebrate, right? (Again, SUCH A GOOD SPORT ON HIS BIRTHDAY WEEKEND, RIGHT?)

So that’s the scoop! And since I’ll be talking more about it and my running adventures in the coming months I’m sure I just thought I’d give you a little background. Have you ever done a race like this? Have any advice? Think I’m a total nutjob? Talk to me. 🙂

40 Comments
POSTED IN: The Relay

40 Responses to Crazy Scheme Alert: Let’s Talk About The Relay