The first time I ever heard of anyone grilling lettuce was on a Food Network episode that involved The Neelys.  Grilling Salad?  I was pretty sure they were smoking more than just the pork butt in their BBQ Restaurants.  But I did bookmark it in my brain as something to try at another time, and one night — feeling kind of lazy about the idea of chopping up a million ingredients — I tried it; and lo!  The Lazyman’s Salad was discovered.

Grilled Romaine, specifically, is one of my favorite creative ways to enjoy a vegetables when cooking out.  There is a bit of showstopping appeal when you put a head of lettuce on a BBQ, and who doesn’t love a little showstopping now and again?  You can thank me later for not embedding the video for that similarly titled awful Danity Kane song in this post.  If I promise you one thing, I promise you that this recipe is better than entire Danity Kane oeuvre (and a Rainbow Cadillac, whatever the hell that means!)

(P. Diddy is such a linguistic visionary.) 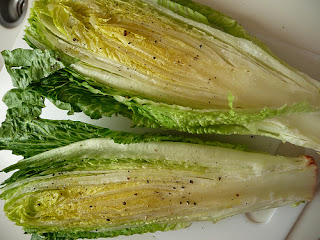 So back to the salad!  Even though I have only ever grilled with romaine, I am going to assert that it is the perfect Grillin’ Lettuce.  (I believe that’s what’s called Begging the Question.  Miriel, please school me on this.) Idiom debates aside, the only preparation that a head of romaine needs is to be sliced in half, keeping the core in tact, and brushed with a bit of Olive Oil, Salt + Pepper.    (You can brush oil on both sides, but I find that it is really only necessary on the inside)  If you want to get really nutty, you could add other dried herbs at this point too.

In the meantime, light your grill and let’s get that sucker going on a relatively high heat.  While you are waiting for it to heat up, let’s talk toppings, shall we?


This is a salad, so toppings are really up to you.  Ok, that was a good talk.

Just kidding.  This is where you can customize to meet any of your dietary needs.  Paleo friends, for example — cut the cheese.  You know, um literally.  For the sake of demonstration, today I want to talk about Grilled Cobb-Esque Salad, because really…why not?  It’s a salad full of bacon and stuff and well, I tend to agree with this sentiment: 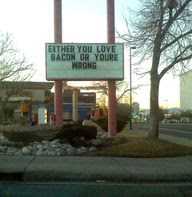 Found on pinterest.  Thank god there is now a website where I can find blurry, terrible pictures of signs about bacon.  THANK GOD.

So while taking a break from pinning arbitrary pictures, and waiting for my grill to heat, I chopped up some Avocado, Tomatoes, Blue Cheese (actually Costco chopped that up, Thanks Costco!), Red Onions, and a Hard Boiled Egg.  I also grabbed a stash of bacon bits from my fridge that I pre-cooked over the weekend.  What? You don’t have bacon bits in a tupperware in your fridge?  GET WITH THE PROGRAM AND GET YOURSELF SOME, they will not go to waste!  Well unless of course you are a vegetarian.  Then don’t do it.  That would be weird. 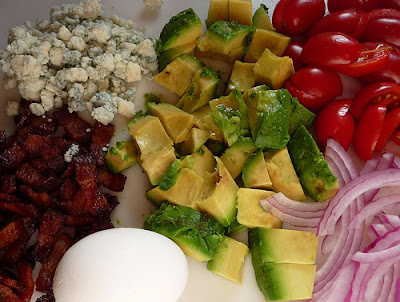 So we are now about to reach the hardest part of this recipe, but I assure you it is all mental.  We are going to — wait for it — put the lettuce on the grill.  I know, you never saw that coming, did you?
Your brain will say no, but I promise your tummy will say yes!  Just try it! 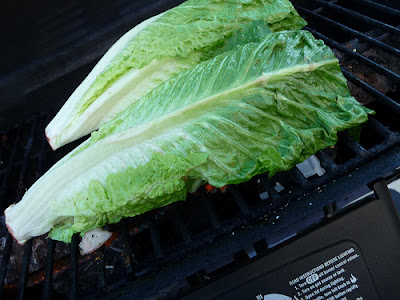 I know.  It kind of makes you want to shake your head.  Have faith.  Have I steered you wrong yet?
So you will be standing at the grill watching all of this go down and wondering what I’ve been smoking (been there) for about 5-6 minutes.   Then your heart will do a little flip.  Well not your heart, the romaine heart.  And actually, you will be doing the flipping.  See what I did there?  That’s what’s called lame comedic wordplay.
Thank you!  I’ll be here all day.
Then, Behold!  Grilled Lettuce!  Could you die?  Wait, don’t die.  The ending will totally worth it and this is not the end.  This is the part in an episode of Law & Order where they bring the first and most obvious suspect in and arrest him, even though there is like, 30 minutes left in the episode so it can’t possibly already be solved. 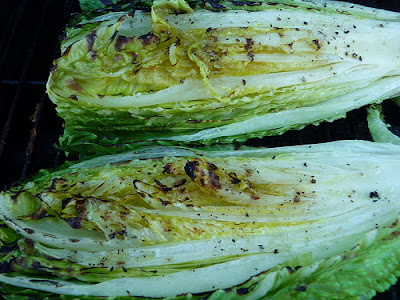 So you will want to go ahead and leave it on for another minute or two just to get everything a bit tender.  The thing about this lettuce is that it doesn’t get all wilty and gross, which — isn’t that what you think when you think about hot lettuce?  But it is the furthest thing from that, I swear.  It’s crunchy, tender, and full of flavor — and that’s even before you add the toppings.


Ah yes, back to the toppings.


So when you pull that shrimp off the barbie and put it on the plate, make sure to dress it before you add the toppings.  Let all of that dressing deliciousness seep into the nooks and crannies of the lettuce so that every bite is full of flavor.  For my Cobb-esque Salad I used a blue cheese vinaigrette.  I could bathe in blue cheese vinaigrette, but you can feel free to pick your own favorite salad dressing.


Then, let’s add our toppings.  Feel free to pretend you are a food stylist while you do this, but just for the sake of full disclosure, these salads taste the best when they look like your produce drawer threw up.  It’s not always a pretty dish, but is ALWAYS delivers on the tastiness. 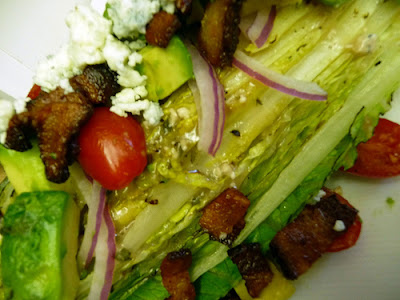 I think P. Diddy would approve!

Although I chose to put a lot of toppings on this particular incarnation of a Bad Ass Salad, I have also made it really simply with only lettuce + tomatoes or lettuce and thinly sliced red onion — really it works with whatever you have on hand.  It’s an exciting texture experience, plus all you have to do is cut your lettuce in half.  I mean people presume it to be fancy and high maintenance but it’s just lazy and easy masquerading as awesome!

It is the Ke$ha of the salad world, people.


So go forth!  Grill Your Lettuce!

And when you do, tell me know how you like it, would ya?