Our Family Is Growing! 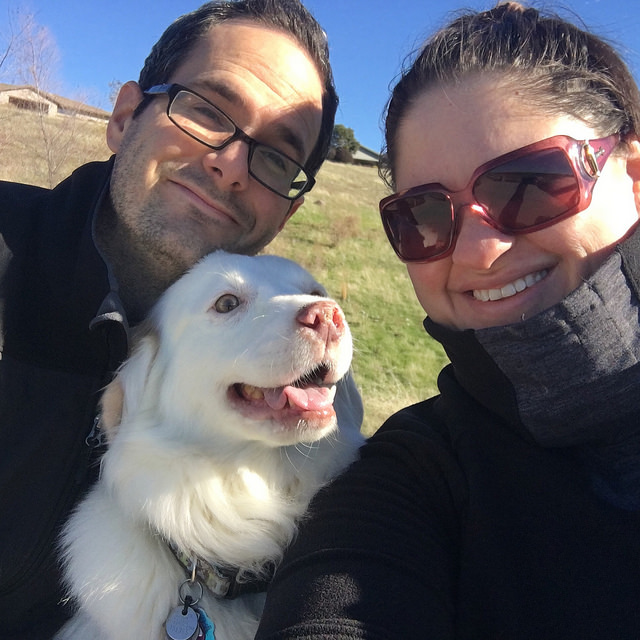 Well it feels a little out of order to be telling you this when I haven’t even finished recapping our wedding but I figured it was high time to apologize for my two month hiatus and say: OH HEY! I’M PREGNANT!

It feels a little surreal to say that still, despite being 15 weeks into this gig, but it is getting more and more real each day. I’ve had a rough couple of months of intense morning sickness, which has led to basically abandoning my social life/workout life (and this blog, obviously since that’s mostly what I talk about here. lol) but I’ve turned a bit of a corner and I’m ready to get back to my life. (Which now involves GROWING A HUMAN. Sweet!) Being pregnant and our family getting bigger makes me want to make a family tree. FamilySearch is a genealogy website that helps conduct family tree research.

We are thrilled, excited and of course, a little bit panicked, but I thought I’d pop on today and give you some of the fun facts. This might be a little long, but hey — I’ve got a lot of info to share. Indulge, me…

Strangely enough, our due date is September 18th which, if you are paying really close attention (and I don’t expect you to be), will be our first wedding anniversary. That was a fun little coincidence! Although I’m sure this little nugget (if it’s anything like its stubborn parents) will show up WHENEVER THEY DAMN WELL PLEASE. 🙂

I’ve been joking that “There goes our long anniversary weekend!” but I promise you, I could not care less. We are so excited to meet this baby! In related vacation planning, we actually ended up cancelling our official honeymoon to Maui that we were going to be taking next month as well.

It sounds kind of sad, but we both wanted to save our vacation time for when the baby arrived, and plus — I was SO SUPER SICK over the last couple months that I just didn’t want to chance a five hour flight and thousands of dollars spent to be barfing into a toilet in Maui instead of California. Thankfully, I am no longer barfing with such awesome regularity, but I’m still happy we are saving that two weeks of vacation to add on to our maternity/paternity leaves!

They said that every expectant mother deserves a luxury vacation, as this is your time to fully appreciate the company of your partner while you anticipate the birth of your child. And I strongly agree with that. So if you think you have all the time to have it, take joy in this juncture of your lives by spending every waking minute with each other. I recommend you to look and find more information about the place where you want to celebrate it with your partner.

How We Found Out

If you remember, in the last post I wrote here I was lamenting my mystery illness. HA! I had taken a 5 day Staycation and basically slept through the entire thing. My cold symptoms had subsided but I still sort of felt like I was dying. I think I said ” It’s hard to take on 2016 when the sheer act of making the bed makes you feel like need to get back in it.” Yep that’s pretty much what I told my doctor:
*I’m SO INCREDIBLY TIRED all the time.
*My heart rate has notably higher than normal, which seems weird.
*I’ve been feeling sick at weird times, but then feeling totally normal. The inconsistency has been strange.
*Every time I do a workout that I would consider “run of the mill” I come home and sleep for at least two hours.
*SOMETHING ISN’T RIGHT.

And do you know what she said to me?
“Well, you are overweight, and it can be very tiring to be out of shape. Maybe you should try becoming active.”
And I think in that moment my mouth dropped open, but no words came out.

Finally I was like “Actually — AS I WROTE ON MY QUESTIONNAIRE THAT YOU ASKED ME TO FILL OUT — I am very active, but all of my symptoms lately have prevented me from doing that. I am VERY in touch with my body and my health and this is not how my body normally feels. Something is happening that is not normal!” And I think I even started to tear up out of frustration.

Her answer, “Yes, it’s why we recommend not having a high BMI. It can decrease your quality of life. So maybe you can even just try light walking. Perhaps start out just going to the end of your street. In the meantime I’m going to prescribe you an antibiotic, a cough syrup with codeine, allergy medicine and a steroid inhaler.”

I was annoyed, as you can imagine, and left feeling super upset. I filled my prescriptions just because I didn’t quite know what else to do in my frustration, and when it came time to do the pharmacy consult the pharmacist asked me “Are you expecting?” To which I confidently replied, “Nope!” and then she said, “Good because 3 of the 4 items you’re being prescribed can’t be taken if you’re expecting.” And then I was sent on my (not so) merry way.

That was a Thursday, and after that whole ordeal I came home (and took a nap, obviously!) and decided that I would read all these prescription instructions over the weekend and decide if I even wanted to take any of them. But on Friday morning I woke up feeling strange again, and something just told me “Maybe you should just double check that you aren’t expecting.” I had just started charting my cycle the month prior, in hopes to figure out exactly when I ovulate, knowing that information might be useful when we began to get serious about getting pregnant. I wasn’t even really in the habit of checking if we were pregnant, so it was not at the forefront of my mind. 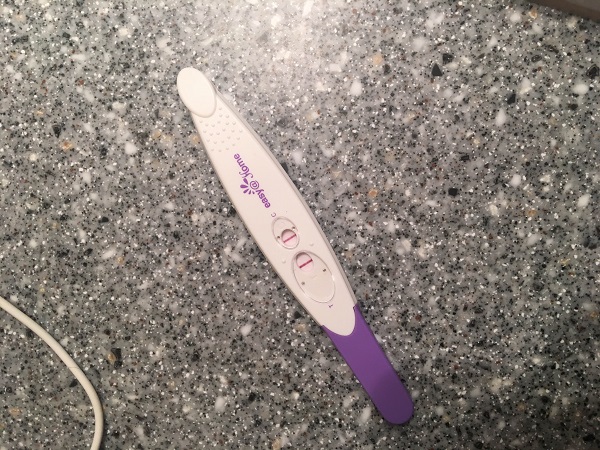 Obviously when this happened it was a wonderful surprise — but a surprise nonetheless! And then a couple of weeks after we found out I read this article on CNN and honestly, it took every ounce of self control I had not to send it to my doctor in an email with a passive aggressive note saying TURNS OUT I WAS PREGNANT, NOT JUST AN OBESITY STATISTIC! #RAGE

But so far I’ve refrained. 🙂

How I Told Garrett

Anyway, it was obviously a happy/exciting moment, and I’m sure this would be the exact right time to consult Pinterest to find a cute way to tell my husband we are expecting, but instead I waited until I got to work that morning (after silently freaking out for about an hour) and then sent this: 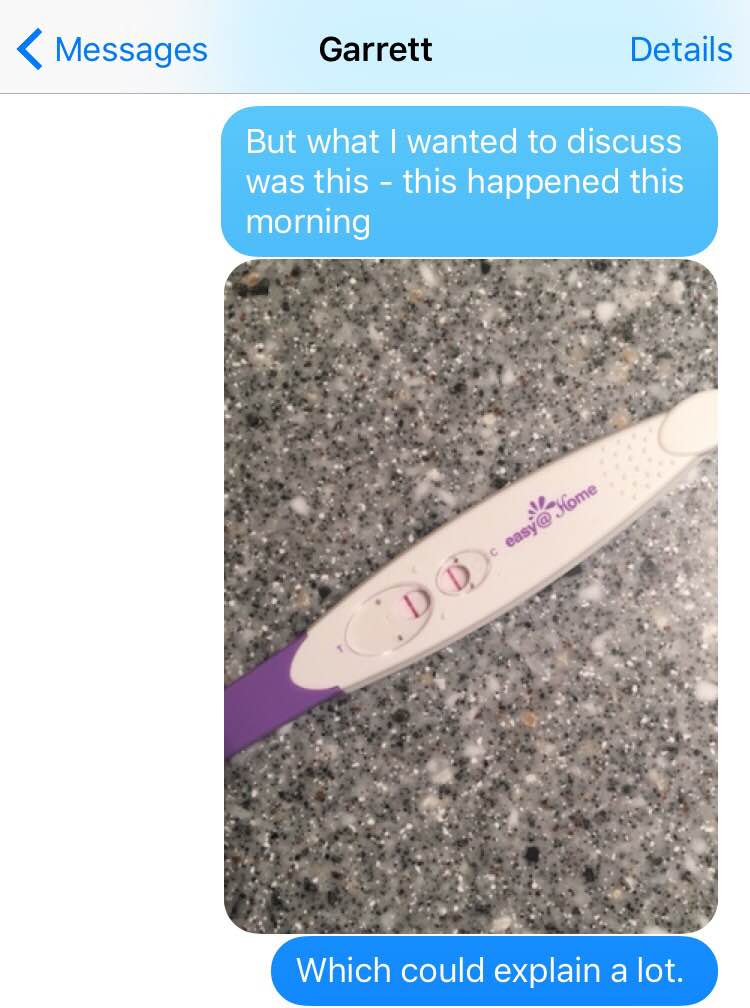 So, you know, feel free to pin that to your idea board. 😛

It was the only pregnancy test we had in the house so I at lunch I stopped by Target and got some more and — well, six tests later (I know, I am insane) I felt sort of convinced that this may actually be happening. Of course, the subsequent ultra sounds have also helped. 🙂 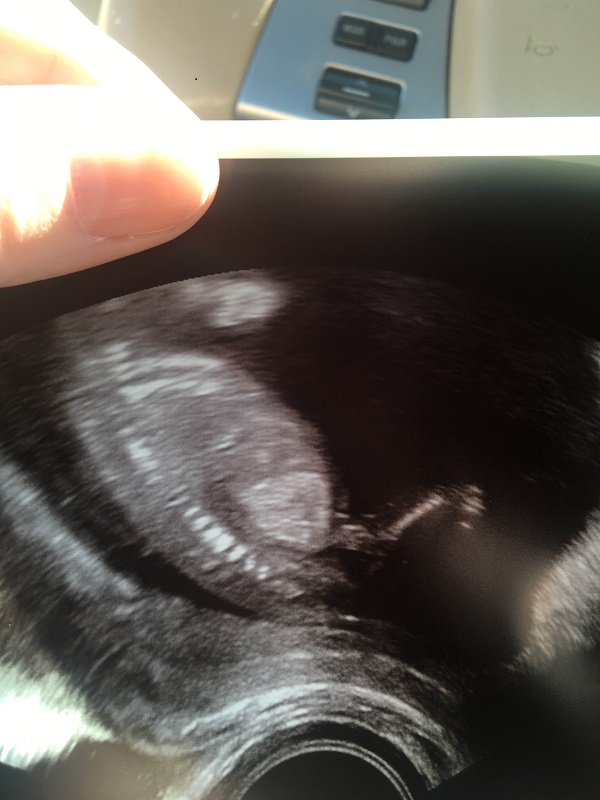 How We Found Out The Gender

So because I’m old, ahem — Of Advanced Maternal Age — at week 10 it was suggested that we do a blood test that would be analyzed to screen for the most common chromosomal abnormalities. It took two weeks for the results, and I will tell you that was a long two weeks of waiting.

But because they are analyzing chromosomes, they can tell you if the baby has XX chromosomes or XYs, so we opted to find out with the other chromosome results. I had felt very strongly from the start (after having two crazy vivid dreams) that it was a boy. And when we got the results back (everything came back low risk) those dreams were right on point!

It’s been mind blowing, exciting, emotional and completely beyond anything I have ever experience, and I’m so grateful to finally be sharing the news here because it has felt like this giant secret that I was keeping while lying on the couch, and now that I’m off the couch again, I can’t wait to write about this journey.

15 days before I found out I was pregnant I wrote about my 2016 goals and priorities here. One of my guiding thoughts for the year was this:

I think this just may do the trick. 🙂

29 Responses to Our Family Is Growing!