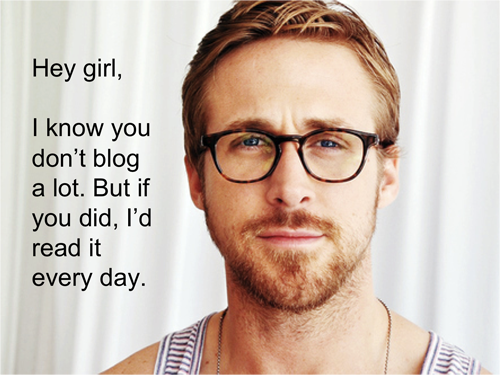 So, do we remember when NaBloPoMo was like, a thing? Now it has been bought and sold and is run by BlogHer and blah blah blah — none of that is really important.

What I do remember fondly though was that back in the day, November was when bloggers made an effort to post Every. Single. Day. I tried a few times and failed, usually on a technicality — forgetting to post something on Thanksgiving or tiring out by the end of the month — but it was fun.

Anyway, I’m feeling a little old school. Also, maybe just a little old — I turned 36 a couple of weeks ago and while I’m not having a crisis over it or anything, I’ll admit to it feeling a little surreal. Aging — such a weird thing. Anyway, where were we? Ah yes, posting everyday in November.

So I’m going to give that a whirl this month. Not in any official NaBloPoMo capacity or whatever, just going to try and pop on here once a day with something to say. The other day I made a list (YAY, lists!) of all the things I’ve been meaning to tell the internet (I’m behind, SO WOEFULLY BEHIND it doesn’t even matter anymore) and there were like, way more than 30 things — so I think I can actually do this thing.

Of course, I may totally forget tomorrow and just fail right out the gate (I’m out of the habit you know plus we are going to look at a wedding venue and I’m sure I’ll be all discombobulated what with the time change and all) but it’s cool. I’ll just pop in and write the next day. Or the day after that.

Point is: I’m making an effort to show up here and babble some in November. On purpose. Not promising it will be cohesive, just promising I’ll be here…mmmkay? You’ve been warned. 🙂