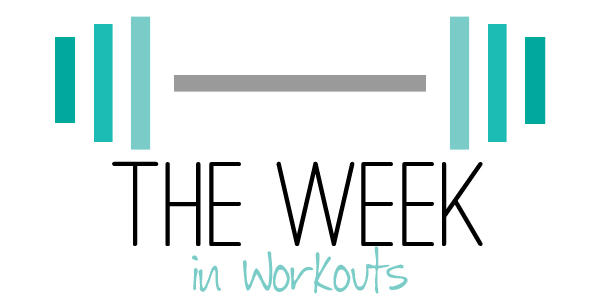 I’ve been switching up my fitness, so I thought I’d pop in on Sundays and share what my workouts have looked like each week. This week it’s a Monday, what can I tell ya? 🙂 I’m on a mission to find a balance of things I love, that make me healthier, and that overall just feel right.

I managed to squeeze in 3 workouts before Garrett’s Week Of Sickness got the best of me.

I haven’t been going to yoga lately and I really miss my Sunday afternoon class. The studio I go to is in the process of moving and I need to decide on a new membership level and BLAH BLAH BLAH – no Sunday afternoon yoga for a while. I’m gonna try and figure that out this week.

Skipped the Monday workout because I had a long day at work and had to bring a ton of work home. Unfortunately I had to do that 3 times this week and I ended up working til 10 or 11 on all 3 nights. It was on a specific project though and that is done, so this week should be much mellower. Thank god!

The Skill today was Seated Box Jumps. Basically you do a box jump from a seated/squat position. Unfortunately that movement gives me a little PTSD since I absolutely RUINED my left shin doing it last year on vacation. (PS – That link is not a photo of my shin. It’s a blog post. Promise.) Anyway, I wasn’t feeling real brave or like pushing myself so I did it on a 20 inch box and a 24 inch box and then called it quits. Shins in tact.

The metcon was the Open workout 13.4

Continue adding 3 reps to each set until the 7 minutes are up.

Oh Toes to Bar, my nemesis. It’s still not something I’m doing comfortably in a workout so I modified it doing knees to elbows and got through the 12 rep set. Still a good workout.

Ah yes, the day of the sand bag. First we did the lift portion which was:

5×3 Push Press I worked up to 125lbs and honestly I surprised myself a little.

Then we got to the metcon. OY!

Here were my two main thoughts about this workout:

1. That’s a lot of awkward running with your triceps flapping in the breeze. Ah well, what can ya do. I just kept telling myself “You are here to get some less flappy triceps” whenever I started feeling awkward. 🙂

2. Sometimes I get down on myself for not having lost more weight, you know? Anyone who has pursued long term weight loss can relate I’m sure. But man, as I ran with a 40 lb bag of sand on my back multiple times, I just kept telling myself “Girl, you’ve lost more than twice this. GOOD FOR YOU! Who cares how long the rest of it takes. Life is long. Enjoy the ride.” Seriously. Perspective is running with a 40 lb sand bag, man. I feel like I should do that like once a week just to keep my head right.

Today I had to go to an all day off site meeting for work so there was no time for me to squeeze in a workout. The upside though was that the meeting was over at the Sac State Aquatic Center on Lake Natoma. We did a number of “Team Building” events where everyone had to publicly look like an asshole, ya know? But it was fun and there were some physical parts to it: a kayak race, a water bike race and then there was a “Wipeout” style ropes course that we got to participate in if we wanted to. It was fun and silly and a nice day overall. Plus we also had to do a scavenger hunt where we had to take creative/funny photos while doing silly things like handstands. I think my team was pretty surprised I had that in me. haha (TOTALLY never thought I’d have to use that skill at the day job. Thanks American River CrossFit!) Also, the entire day I kept thinking about the Watch What Crappens podcast episode where they talked about the “Sexy Corporate Retreats” show they think they should pitch to Bravo. If you are a Bravo fan and not listening to that podcast: GET ON IT!

Skipped that shizzzz cuz I was tiiiiiiiiiired. And apparently getting sick. Too bad I wouldn’t realize it fully until Saturday afternoon.

I slept for like 13 hours on Friday night. I’m embarrassed about that, but it was sort of epic. At around 10 I decided it would be fun to go work on my snatch at Barbell Club at the gym. Every other Saturday we alternate between 90 minutes of Clean + Jerk work or 90 minutes of Snatch work. Today it was all Snatch.

We worked a number of progressions including snatching from the high hang position which basically forces you to have explosive hips or the bar just won’t get up. Upside: it’s a huge help! Downside: It gets your thighs nice and bruised up. Bummer. Then after all the high hang work we moved on to finding a heavy 1 rep. We weren’t looking to find a 1 rep max since we had already been working for 90 minutes, but when I got to my prior 1 rep max (105lbs) I threw the bar up like it was no thing! I was pretty sure I was going to go home with a nice new PR, but despite like 30 attempts I could not stick 115lbs. I probably should have tried 110, but that involved too much math so I just kept attempting 115. Whatevs. Another goal for another day!

Went home and took a bubble bath and an epic nap and woke up the next day and realized all that shoulder pain wasn’t from snatches, I was actually getting sick. WOMP WOMP.

Any new PRs for you or awesome workouts?

2 Responses to The Week In Workouts