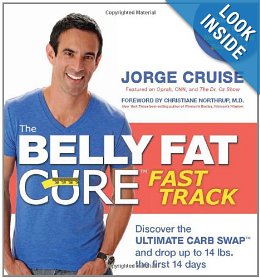 A few weeks (crap, maybe months. OY!) a blog reader sent me an email after I posted about needing to get my weight loss jump started again. She recommended Jorge Cruise’s The Belly Fat Cure: Fast Track and mentioned that she emailed me the recommendation because she didn’t want to write about it in the comments and risk people being critical.

Wait a minute, people being anonymously critical on the internet? THAT NEVER HAPPENS! 🙂

Well, luckily it doesn’t happen too much around here (LOVE YOU GUYS FOR THAT) but I knew where she was coming from. Especially because my first thought was “UGH. Jorge Cruise? Isn’t he the 8 Minute workout dude? I don’t know about this.”

I am kind of over Info-tainment health people, you know? Nutritionists on Good Morning America, Doctors hosting TV Shows, Celebrity Trainers — OH MAN, don’t even get me started on Dr. Oz. I am 100% NOT a fan, but that is a conversation for another day. Maybe never. Dang, it gets me riled just thinking about it. Anyway, all of that to say: I was a skeptic. But I also love blog-reader recommendations (Seriously. Email me anytime) and so I immediately put it on my Library Hold List like the good little book nerd that I am. No harm, no foul — if I hated it, I would just return it to the library. Win-win.

When I picked it up I was pleased to see that it looked fun: square and spiral bound — almost a mini-binder instead of a book — but it still had Jorge Cruise’s giant picture on it exclaiming we could all lose 14 lbs in 14 days. I mean, listen — I lost 30 lbs in a month when I first started eating Paleo, so I know it can happen, but when a diet-book puts that on it’s cover I am EVEN MORE skeptical. But I began flipping through the glossy pages…

The first thing I found was the foreward was by Christiane Northrup — who I LOVE LOVE LOVE. She’s a doctor who talks about chakras! Rock and roll! Such an awesome combination of women’s health/hippie healing and I love a good advocate like that. I have a bookshelf stocked with her books that have changed my understanding of my own body and I have to admit I was a little surprised to see her addressing what I thought was going to be a gimmicky diet book.

Next, the book delves right into the causes of weight gain and how to avoid it. I expected to read a mix of recommendations encompassing the Eat Less, Move More mentality, but lo and behold the entire first chapter explains simply and succintly that if you want to lose weight, you need to understand how insulin works in your body. Period. He immediately calls out sugar (and even more insidiously) hidden sugars as enemy number one. He doesn’t demonize carboyhdrates, but he does break down how they work in your body, and how they relate to weight gain. I was starting to get on board.

But this is also the chapter where he discusses the concept of “Losing 14 lbs in 14 days” and whether or not it is healthy, and I still wasn’t sure I’d be down with that. Right from the start though, he owns the fact that losing 14 lbs of fat in 14 days is NOT healthy or desirable (or frankly even possible, really.) But he talks about the idea that there are many things involved in weight gain, not only just fat. In this chapter he introduces a concept called “Hidden Belly Fat” that I can totally identified with and understood. He goes on to explain that “Hidden Belly Fat” isn’t really fat but it sure looks like it. (You may know it too — that soft spare tire layer that springs up out of nowhere after a few weeks of eating garbage.) In reality it is a sign of that metabollic disconnect that happens to a lot of people (myself included!) when they don’t keep the insulin/hormone situation in their body in check, and I have to applaud Jorge Cruise for discussing some of the consequences of Metabollic Derangement in such easy to understand terms. I think this is one of the most revolutionary concepts in his book and I was happy to think about it with new analogies. (Sidebar: Stacy from Paleo Parents wrote a great blog post on this exact topic of hidden belly fat, although from a different perspective, that I think is a really worthwhile read.)

The next section is pages and pages of testimonials and pictures of people who have completed the program (he has yet to outline it at this point, but of course all of the results pictures are pretty impressive) and then he finally gets on to outlining what the Fast Track program is based on. I was really intersted to see — would it be an elimination diet, would it be about timing your food intake, would it be more of this “eat 5 small meals a day by properly combining foods” crapola — WHAT WOULD IT LOOK LIKE??? I was very curious at that point. Curious and surprised. Surprised that I was enjoying his voice and that so far all I had done was nod my head at his information and his references.

Speaking of references, each chapter begins with a quote — and when he gets into the section about what to eat — guess what person he choses to quote?

I was floored. Was Jorge Cruise about to espouse eating Paleo? I read on…

Turns out Jorge Cruise is all about an Ancestral Diet. Who knew? (I sure didn’t, clearly.) He leans more towards a Primal approach (including dairy and wine…woo hoo!) but his book outlines very well researched (the appendix at the end is large) nutrition advice that is not only completely sane and unscary or restrictive sounding, but the book also includes meal plans and recipes at the end that look really delicious. And he even talks a little bit about high intensity exercise and why it is such a more effective replacement for chronic cardio, so obviously he got some points for that!

The Belly Fat Cure: Fast Track is smart, easy to understand, and is a new interpretation of Paleo that isn’t so tied to food politics and nutrient density. It’s mostly just a functional weight loss book that doesn’t really espouse any food philosophy, so I think it might appeal to people who are scared off by the words Paleo or Primal but want an easy guide on how to lose weight that also explains how your body works. I’m obviously very pro-Paleo, so I don’t really mind that label, but not everyone is down for that so I think this book could have good mass appeal. I was so happy that I read it and really, really surprised I liked it. Maybe you know someone who might too?