So, I’m fairly certain I need to sleep for 24 hours straight!

I took the day off on Friday so we could head down to the bay area to see Garrett’s best friend get married. Aren’t Boy BFFs the cutest? I mean, us girls are always sharing the Best Friend necklaces and telling secrets and having each other’s backs, but there is something a little bit special when you find gentlemen, in their 30s, who have known each other for more than half of their lives, who still share the ups and downs of their lives on the regular. I don’t know, I think it’s pretty cute. So Friday was the rehearsal//dinner and Saturday was the big day. But we were also lucky enough to squeeze in some family time by staying with Garrett’s uncle on Friday night — which is always a good time. They are two peas in a pod, those guys, so I was basically entertained the entire time we were there — even just around the breakfast table. Oh, did I mention Garrett was the Best Man? So obviously he had a little bit of nervous energy throughout the weekend. All the anticipation of ring holding and speech giving had him a bit preoccupied, but once that was out of the way it was all drinking and dancing and celebrating for the rest of the evening! He totally killed it on the speech — EVERYONE loved it and spent the rest of the evening telling him so — which made me feel very proud. He was so nervous and just wanted it to be perfect for Eric, and honestly (even though I know I see through rose colored glasses) it WAS perfect! I was excited (obviously for the event itself) but also because it meant I got to wear some fun dresses! Woot! 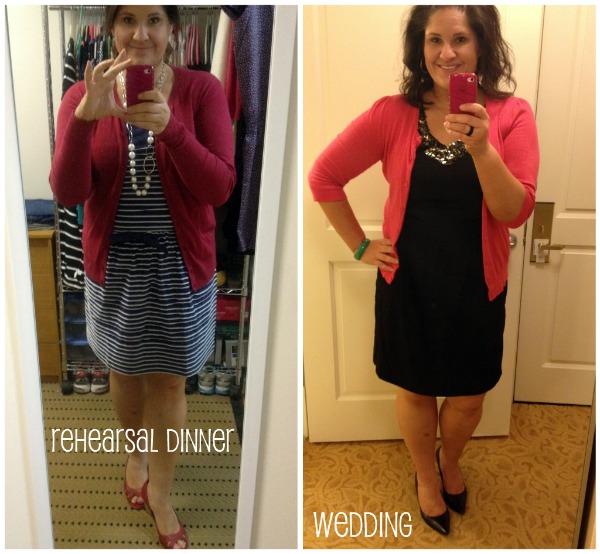 I treated myself to an airbrush tan beforehand — you know, due to unaccessorizable CrossFit injuries I was sporting on my legs — so I’ll be giving you the ins and outs of that this week. Sneak Preview: One Part awkward//One Part Awesome.

All in all a great time was had by everyone! Especially the bride and groom! I can’t wait to see the good pictures that a non-drunk person with a better than an iPhone-camera took. It was a quick and memorable weekend with little sleeping, terrible eating and lots of…well you know… Glad to be back to my routine, but so happy we got to be a part of such a momentous occasion!