Discomfort and The Oboe Principle

I heard a little gem of wisdom the other day that made me laugh and it started a thought train that I felt the need to share. I spent last week in a 3-day long sales seminar, and if I could emphasize any word from this sentence it would be the word LONG. It was a LONG week, that last one, and I’m sure you are sick of hearing about it as much as I was sick of living it, but it was during this seminar (a seminar where the expression Always Be Closing was used multiple times un-ironically :::sigh:::) that one of the instructors told a story about her son who plays the oboe. One day he was complaining to his music teacher that playing the oboe was so hard, and whyyyyyyyyyyyy, why was it so hard? And the teacher replied, “If it wasn’t hard, the wrong kind of people would be playing it.” And it just made me chuckle. Apparently the oboe has a Natural Selection process.
*****

I followed up that long week by inviting a group of strangers over to my house on Saturday to ask me questions. Questions that I would have to answer on camera. While trying to look natural. Easy peasy, right? HA! My awkwardness knows no bounds.

The backstory of this film is right here, but I want to tell you why I did it, because I hope that you know that the genesis behind participating had nothing to do with how fabulous I think I look on camera. Is there anything more nerve-racking than picking out an outfit to wear when you are being filmed? GAH! I would submit, no. I AM NO RACHEL ZOE!

Anyway, I did it because the thought of speaking on camera about Paleo and CrossFit (and how they have both changed my life) like, for OTHER PEOPLE TO SEE (OMG!) made me feel super uncomfortable. And as much as I hate to be uncomfortable, I’ve found that most often, doing things that make me feel uncomfortable generally get me closer to my goals. Life is weird that way. Comfortable is easy. I like comfortable, and the act of keeping myself comfortable is a part of my major routine. But every once in a while if you want to grow, I think you have to push.

T.S. Eliot sums up this philosophy so much better:

I know I post this quote here a lot, but it is such a good reminder to always find your edge (to borrow a yoga term) — It’s in the edge that you find your progress.
****

So that was Saturday. Then on Sunday we got up at an ungodly hour and took a road trip down to the bay area to watch our first CrossFit competiton: The Nor Cal 40s. 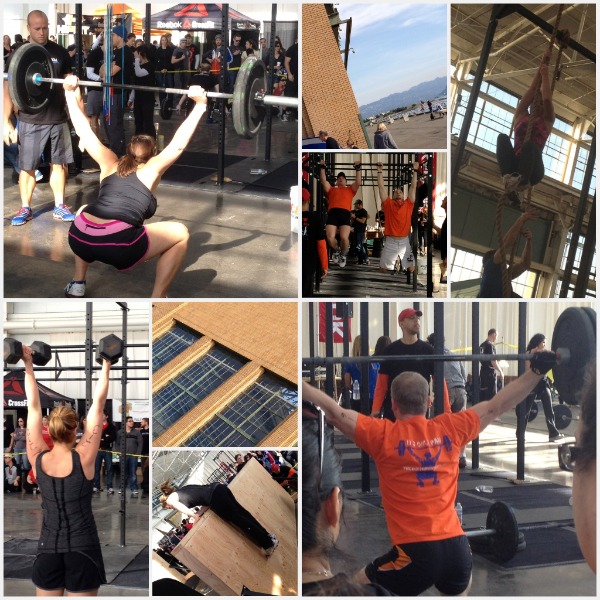 The event was for athletes 40 and over, and we went out to support some of the rock stars from our box who were competing, and I can’t tell you how inspired I was when we left. (Okay okay, I also left feeling tired — sympathy tired clearly, as the most work I did yesterday was pouring a mimosa– and having a serious craving for In-n-Out Burger. But both of those feelings were easily overcome.) I actually left yesterday having some clarity about why I love CrossFit so much. And it totally has to do with discomfort and The Oboe Principle.

You always hear about how competitive CrossFit is — your times are monitored, your number of reps are tracked, the workouts have benchmarks. Sometimes when people hear about CrossFit they say the competitive atmosphere wouldn’t appeal to them. They don’t want to compare themselves to these super fit people, that doesn’t motivate them. But the thing is, CrossFit has nothing to do with comparing to others. In fact, it is about pushing YOURSELF to your limits — whatever those limits are. It’s about finding your own personal PRs, not beating the PRs of others. And all of the athletes I watched yesterday were doing just that — pushing themselves out of their comfort zones and giving it their own personal best! Every person out there, no matter how they ended up finishing was an inspiration because they had the guts to try.

I understand that people think CrossFit sounds hard, but honestly, its elements aren’t any harder to do than that treadmill or that yoga class. What it requires, however, is a commitment to feeling uncomfortable most of the time in the name of bettering yourself. And the truth is, that does not appeal to all people. I’m not making a judgment about it being good or bad, so please don’t take it like that — CrossFit isn’t for everyone, full stop. I get that. But yesterday I left that event thinking, THIS. THIS is actually the exact reason why I love it. I love the butterflies and the rush of adrenaline. I love the fear and I love the success. I love to truly push myself to the edge and support others who are doing the same. Those are my people.

And Yes, it gets hard. But if it wasn’t hard, then everyone would be doing it. And if everyone was doing it, then it wouldn’t cause discomfort. It would be a comfortable thing that I could motivate myself to do regularly. But I left yesterday feeling more inspired than ever. I left feeling excited about finding that next thing that I want to do that would make me feel uncomfortable. I left ready to push my limits and reach toward my own edge. And tired as I am from a long, busy weekend, I can’t wait to get back in the box tonight. I think TS Eliot would have been a CrossFitter. Or maybe he would have played the oboe. Either way he is a champion of pushing yourself and that — is totally something I can get behind.

What are you going to do this week to push yourself? Can you find something small that will make you step out of your comfort zone?

5 Responses to Discomfort and The Oboe Principle