Well, crap.  We’re almost a third of the way through July and I haven’t even told you about the books I read in June!  Let’s talk about them, shall we?  There were six.  And if you are a skimmer make sure to read about the last book because it was A FAVORITE!

A Place of Yes by Bethenny Frankel

Look, don’t judge me.  I like Bethenny.  And if you have read these book recaps long enough, you know I’m a sucker for celebrity books.  In fact this month I actually picked up Jesse James’ American Outlaw and FELT SAD when it was due back to the library because I hadn’t had a chance to read it.  Now that, you can judge.  It was morbid curiosity though, I swear.  I’m Team Sandra all the way.  The thing about celebrity books is that they are rarely all that enlightening.  In other news, water is also wet.  Now that we have gotten the Top Stories out of the way, I feel it is my duty to tell you that despite my love of Bethenny, her show, and of course her Skinnygirl Cocktails — I was sort of disappointed by this book.  It was just a little bit too self help-y for me, but you know, in her defense that is kind of her gig.  At least in this one she wasn’t being self-helpy and telling me I should be eating the whole wheat versions of everything available.  I will say though, that if you like her and you are in that sort of mood, pick it up.  She is hilarious and she does tell a good story, so in that sense it wasn’t a total loss.  I just was in more of A Place of Notsomuch when I read it, you know? 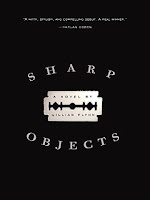 I hijacked this book recommendation from a post over at All & Sundry where the comments were basically a library-gasm.  It’s a mystery surrounding a troubled reporter living in Chicago who ends up back in the southern small town where she grew up doing some investigative journalism surrounding some grisly murders.  I know the word grisly is cliche but I just love it!  Grisly.  Grisly.  Ok enough of that.  So, the thing about this book is that it is VERY page turning.  And who doesn’t love to read a book that gets to the bottom of a murder mystery?  In that way, it was satisfying.  Also sometimes scary.   The characters were a bit one dimensional though, and there was this somewhat unbelievable psychiatric subplot.  But the thing that ruffled my feathers most was that in the second half of the book people started acting in a way that seemed very disparate from how they had been previously written.  Almost like the author wrote the first half, took a break, and finished the second half.  But it was quick and easy, and mostly entertaining so if you are looking for something pulpy to pick up to tickle the part of your brain that loves a mystery (coochie coo!) — I’d say read it.  I’m basically recommending the book equivalent of a bad Lifetime movie that you watch on a Saturday afternoon KNOWING it’s not going to be great, but enjoying it immensely anyway.

Back in May Janssen reviewed Gladwell’s book What the Dog Saw and some of the links to his essays made me fall down a Malcolm Rabbit Hole.  I decided it would be easier, and that my eyes would thank me ultimately, if I just did a little refresher in book form.  I generally enjoy his books, so this was the first one I tackled and you know what?  It was…only ok.  I’m a fan of most of his essays — they generally tackle interesting topics in a light, but somewhat researched, manner —  but this one didn’t keep me quite as riveted as usual.  Also, I feel like I should add the disclaimer that I was forced to read it in one day because it was due back to the library and I couldn’t renew it.  This was probably an influence.  Mostly because it made me painfully aware that he does this annoying thing in many of his essays (which, actually, is probably more the reason it annoys me —  the actual technique itself is not all that annoying) where he opens up with this description of an ordinary person, in an ordinary place, doing ordinary things and then out of the blue mentions– “Oh yes, and his name was Abraham Lincoln” or some other well known person.  And listen, I get that he is trying to humanize the stories that he tells — a sort of historical equivalent to Stars — They’re Just Like Us, but it gets kind of old when you see it over and over.

I have heard way too much about Berg’s writing ability to have never picked up one of her books.  It was an impulse grab at the library and I’m so glad I picked it up!  This was actually the second in a series but I didn’t feel confused going into it without reading the first.  It was short and sweet fiction about a young girl who has lost her mother and is living with her father and trying to make it through adolescence unscathed.  GOOD FREAKIN LUCK, main character. It was very cute though, and I agree that Berg does have a very emotive quality to her writing that pulls you right in.  I will definitely make an effort to read more of her books.

Home Cooking:  A Writer in the Kitchen by Laurie Colwin

This was literally delicious — but you all know I love a good food memoir almost as much as I love a celebrity memoir.  Colwin tells stories of her homes and kitchens, of good meals and bad, and tales of both friends and family.  The book feels a bit dated — it was published in 1988 so some of the nutritional references made me kind of giggle, but her passion for food, observation, and storytelling really still feel relevant.  I’d say if you are a fan of Molly Wizenberg, you will definitely enjoy this book. You may even learn a thing or two, I know I did.

The Dirty Life: On Farming, Food, and Love by Kristin Kimball

I just loved this book!  It’s a memoir centering around a Manhattan journalist who gives up her city life to move out to a farm in upstate New York with her boyfriend.  They starts one of the first “Whole Diet” CSAs and this book details the rocky road to get there.  For about $60/person a week, their farm provides beef, pork, chicken, seasonal vegetables, and dairy to its members.  Um…where  can I sign up?  Too bad it’s not in California.  You would think we would have one of those where I live.  Hippies, what are you waiting for — I WILL PAY!  It’s not your typical cliched City Girl Goes Country and Lives Happily Ever After story though.  This book (and the farm) is complex and fraught with complications.  There are conflicting passions, interesting personalities, and after only one year there Kimball emerges almost a completely different person.  It’s about how love changes you and how nature enlightens you — plus there is so many mouth watering descriptions of meals that you BEST finish your dinner before picking it up to read for the night.  Super enjoyable!  Highly Recommended!  Go forth, and read it and then tell me what you think.

So that’s all for me, folks.  What great page turners did you pick up this month?

One Response to June Books