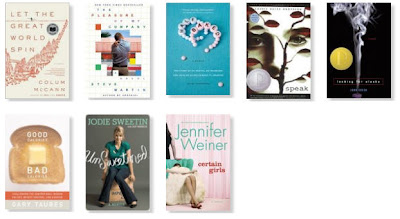 This appears to bode very well for my goal of reading 50 books this year, but before I go puffing up my chest with pride and amending my goal I will let you in on a little secret:  I always read a lot in January.  Winter is a good reading season for me because antisocial sloth is my natural state.  I mean is there anything better than a curling up on the couch with a book when it’s cold out? So yeah, I’m not getting too cocky just yet.  When spring and summer show up, life always inevitably happens so I am still going to keep my goal of a book a week, and some months I’m sure I will excel, and during others I will surely fail miserably. My aim is to read more and talk about books here more, so let’s get to the talking part, eh?

(Here is a reminder on how I evaluate books.  Don’t worry, it’s not scientific, and doesn’t even involve math!)

Certain Girls by Jennifer Weiner
I picked this up when I was in a hot pink covered book mood.  I know you know this mood whether you like to admit it or not.  It is the follow up to Good in Bed  and I liked that book well enough, so I was interested in what the characters were doing 10 years later which is the premise here.   Hot pink or not, I have to give Weiner credit, she is a very smart writer and I think too often her books are sort of relegated to “chick lit fluff” but I think she really does bring something a little different.  One of the things that stood out in this book was the relationship between Cannie and her daughter, and their family unit as a whole.  It was complex for fluff and she certainly knows how to capture that complexity.  Without spoiling it, I will tell you that the end of the book made me very emotional. It was not so much about the events of the plot as it was the words Weiner used to talk about them.  She captured a feeling that I know well in a very beautiful way and heart wrenching way and I got a little misty, y’all!  That’s more than I can say for many other hot pink covered books that tend to dwell a bit in cliche, so plus for you Jennifer Weiner.
Verdict:  Very Good Writing.  Somewhat Engaging Premise, if you’ve read the first book.  Page Turning.

unSweetined by Jodie Sweetin
Aha! I see what you did there, Jodie.
Come on, you are morbidly curious about Jodie Sweetin’s meth addiction and whether Uncle Jesse’s hair really got him laid in the 90s aren’t you?  Well I will admit it, I was curious and when this showed up on an end cap at my library, I gave in to that curiosity.  It’s kind of a sad story — I always feel bad when I read about people who “have everything”  but turn to drugs to deal with their insecurities — but the book felt like a bit of a cash grab and didn’t make me feel super sympathetic.  Especially when she spends the whole book saying she’d do anything for money, and confesses to giving false interviews to People magazine just to stay in the press and stay relevant.  All of that made me somewhat leery about this whole “I want to tell my story to help people” tone, you know?  It came off as opportunistic, which frankly I don’t fault her for, it’s obviously a story people are curious about, but it felt a bit inauthentic.  It was short and sweet though — a very quick read.  And hey, I may actually click through when I see an article on People.com about her now just to see if it smells of bullshit — so hey, Mission: Accomplished Jodie!  For whatever that’s worth.
Verdict:  Poorly Written.  Engaging Premise.  Pretty Page Turning.

Good Calories Bad Calories by Gary Taubes
This was a great guide to what science has to say about nutrition but in the voice of a journalist.  A science-y journalist though, not like an US Weekly reporter.  Not that there is anything wrong with US Weekly, just thought it was worth making the clarification.  I like to learn while still reading something interesting and this book definitely fit the bill.  Sure the subject matter can get tedious and the book is sort of daunting, but overall incredibly informative.   Lots of good stuff clarifying the role of carbohydrates, insulin, cholesterol and really debunking some of those common fear mongering beliefs that our society holds as “Conventional Wisdom.”  It turns out a lot of it isn’t all that wise, and doesn’t have a sound scientific basis.  It makes me feel sad that nutrition and health have become such a mine-field of marketing.
Verdict:  Good Writing.  Engaging Premise.  Not always a Page Turner, but that’s sort of par for the course.


Looking For Alaska by John Green
I read this because after finishing Certain Girls, I read an interview with Jennifer Weiner where she discussed reading a lot of YA Fiction while working out how to write the character of Cannie’s teenaged daughter.  I had been wanting to revisit some good old YA fiction and when I looked this book up it seemed to be something I would enjoy.  And it was for the most part.  A good coming of age story, entertaining characters, and I loved all the factoids about famous people’s last words.  It reminded me of an angsty teen 80s movie in the best way.
Verdict:  Good Writing.  Engaging Premise.  Page Turning.

Speak by Laurie Halse Anderson
This was another book Weiner recommended and while I liked it, it also reminded me of why I get annoyed at YA fiction.  All the characters are just soooooo affected and remind me exactly of how Kristen Stewart plays Bella in all the Twilight movies.  Sometimes I get fairly impatient and want to roll my eyes and get on with it.  So imagine my surprise when at the end of this book I read something that said Kristen Stewart was in the movie adaptation of this book. Who knew?  A good choice, I guess.  That said, this book really was so well written. She nails the angst. The shame.  High School.  UGH.  And she doesn’t hit you over the head with The Secret that the main character is struggling with.  It’s a good read, this one.  As for the movie, I don’t know if I will be able to take it but if I watch it, I’ll let you know.
Verdict:  Good Writing.  Engaging Premise (you want to get to the bottom of the secret!).  Page Turning (mostly because it was short).


Half Baked by Alexa Stevenson
Well, I’m about to get fired from The Internet.  I did not love this book.
Now, before you stone me, please understand that my opinion of the book is completely separate from my opinion of Stevenson’s harrowing ordeal miscarrying one of her twins and going on to have the other one at 25 weeks.  That is an incredible story, and WOW — I definitely have a lot of respect for her.  But — now I guess you can get your stones ready — this book!  Oh, this book!  It was so incredibly overwritten in my opinion.  Everything is a freaking metaphor with some obscure reference that isn’t really that obscure but just sounds so obscure and OHMYGOD when it comes to sentences Less is More, Alexa — LESS IS MORE.   I just really found the act of reading this great story to be a giant pain in the ass at times.  She spends the whole book talking about how neurotic she is, and I get that this is kind of the point:  stressful situations + neurotic people = compelling novels about learning lessons in life.  But it was a bit contrived.  Instead of saying “I was feeling anxious” and owning it, the whole book was like “haha let’s all talk about Shrodinger’s Cat  and quantum mechanics because OMG it is such an apt metaphor for my life right now.  Like totally!”  And that god old, yo.  So yeah, maybe I just just resign from The Internet instead of waiting to be fired, because seriously all that hype about this book seems to me to be more about having warm, fuzzy feelings about this author and her blog rather than actually about the writing in my humble opinion.  Maybe we can just agree to disagree?
Verdict:  Irritating Writing.  Engaging Premise (harrowing, insane story).  Kind of an anti page turner since I already knew the ending and really got impatient with almost all of her sentences.

The Pleasure of My Company by Steve Martin
I feel like I should confess to you that I kind of have a thing for Steve Martin.  Not like I’m hot for him, but I just have this sort of crush on him as a creative person.  He just does so much (seriously? movies! music! writes novels!  I just want to have coffee with him and hear about his life) and I think he is kind of underrated.  That said, this book is weird.  The main character is weird.  The whole premise is weird.  And that’s kind of why I loved it.  It’s actually a novella so it is a quick and easy read — I read it on the plane home from New Mexico — and the voice is very unique.  I love that Martin is not afraid to be a little different.  I’d probably read anything he wrote.
Verdict:  Interesting Writing.  Oddly Engaging Premise.  Page Turning.

Let the Great World Spin by Colum McCann
Why is this the first Colum McCann book I have ever read?  That will be remedied soon, I hope.  This book was an amazing compilation of stories portraying New York in the 1970s somewhat centered around the tale of a tightrope walker who is performing between the Twin Towers.  Honestly, it was a bit slow to start — not terrible, but not super page turning — and then one night I was reading one tiny little paragraph in the bathtub and I was like, OH MY GOD! I GET IT!  It’s about the space in between — the liminal spaces (hello, college buzzwords!) those moments of potential, the physicality of transition.  The book sort of knocked me over the head actually and it from there was one of the most wonderful things I’ve read in a long time.  It was complex and beautiful.  It was the kind of book I always wish to find and I loved it.

Verdict:  Gorgeous Writing.  Engaging Premise (the spinning of the tales was flawless).  Not a huge page turner.  More of a book to savor.


So, if you actually got to the end of this long ass post, tell me:  What did you read last month that you loved?