Creating A Life That Needs No Escape 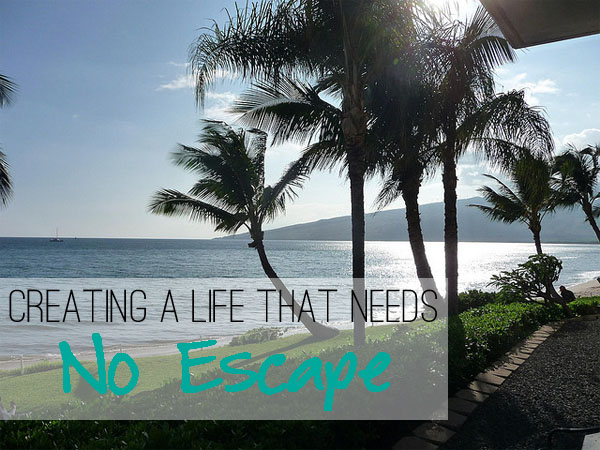 I’ve been reading a number of things about personal finance, simplification and consumerism lately. These are things I think a lot about anyway just because I find them fascinating, but with all the recent lifestyle changes we have been making I have found myself even more committed to making sure we are doing the best we can with our finances, saving where we can, DIY’ing when it makes sense, and generally being cognizant about Need vs. Want. With Garrett working part time right now there’s really no glossy way to put it, our income has been reduced by almost half.

That’s actually kind of a panic inducing number when you think about it – but in actuality it really hasn’t been that stressful. I know what you are thinking, “But Holly, what do you mean things haven’t been stressful, I read your blog. You’re life has been a ball of stress lately.” And to that, I would agree, but I would also clarify: I’m not saying we haven’t had stressful things going on – um, you are correct to note just about every post over the last two weeks — but the reality is that this stress would have been there no matter what, whether we were both working full time making twice as much money, or not. And my point is that our reduction in income hasn’t made life more stressful and in fact, I’m going to posit the exact opposite.

What has been amazing over these last few weeks with all this stress going on is that with Garrett’s new part time gig at Peet’s (free coffee, FTW!) it has been so incredibly awesome to have him around because he is well suited to be Captain of Team Fix It. These types of stressors are things Garrett handles better than I do, so he’s kind of the obvious choice. So even with all the craziness going on there is definitely a more relaxed energy around our house.

For me, it has been because Garrett has been majorly owning life on the home front (instead of us both juggling to split it) and for him, the fact that this new job is about 90 Bazillion times less stressful than either of the jobs he has had in the last 5 years is improving his quality of life in ways we didn’t even plan for. No doubt we have definitely had to contemplate decisions about purchases more carefully, and we have had to (sadly) say no to a couple of experiences that we would have normally jumped at the chance to be a part of, but overall life with less money has felt (dare I say) better.

This is weird, right? Stick with me for a minute and I will explain away the crazy, I promise.

I read something recently that that sort of inspired me, and also did a little dot connecting for me in my head. The post was about creating a life that needs no escape, and the part that really resonated with me was this:

I think that for a lot of people, vacations are as much about getting away from normal life as they are about seeing new places. Most people get two or three weeks of vacation time each year. Do you really want to have two or three great weeks per year, during which you try to get away from whatever it is you do with your time the other 49 to 50 weeks? I would rather have 52 great weeks and no desire to escape from my life.

I think what resonated for me was this idea of being intentional with your life. You are in the driver’s seat, so why not be creating a life that you want to live, instead of planning all these things to do when you finally get some time off from life? Even though the above post came from a financial blog, I feel like this idea of creating a life you want to be living encompasses so much more than just saving your money (though that is a big part of it). I think it is about defining what you value – and really, when you get caught up in the hustle bustle of everyday life, sometimes you forget to ask yourself if the tasks on our to do list are really aligning with what it is you truly value? Defining your values, figuring out what excites and inspires you, and determining what success looks like for you in your own life is hard enough. Add on trying to actually achieve these things in the context of the well meaning others around you (with their own opinions) and it becomes almost this radical idea.

For us, the past couple months have been a little bit radical. We have definitely had much less disposable income to kick around, but what we found is that we had an overabundance of time and energy and, as it turns out, that we were ALWAYS craving! Time to get things done, time to plan, time to execute and of course time to breathe – all of these things are such underappreciated luxuries!

But it turns out, we’ve unintentionally created this life where all of that comes standard. And even though we’ve been doing some penny pinching, having a little less money lately has really forced us to think about what we truly value, and many of those things: time with our family, having dinner together, being outside, exercising, reading, working in the yard, tending to our little garden, catching up with friends – don’t really require millions of dollars.

But having the time to spend doing them? Priceless.

2 Responses to Creating A Life That Needs No Escape