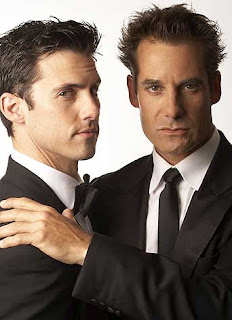 So I’m currently sitting in a terminal in LAX across from Adrian Pasdar and Milo Ventimiglia from Heroes. (And for the record, they are not doing that weird man embrace like in the picture, but strangely enough they are wearing suits.)

I’m amused that I can be in an airport and yet also blogging about this as I keep making sporadic eye contact with them (You know, in between all the text messages that I’m sending EVERYONE I KNOW WHO MIGHT THINK IT’S INTERESTING). It’s so cyber-meta. Ah, technology! So wonderful! So creepy!

I actually would not have even noticed them at all because they are rather diminutive figures, which in my experience is always the way it is with celebs, but as I was making my way up to the LAX Security Line there were a ton of paparazzi stalking away with all of their flashbulbs. It wasn’t even a huge group but I thought to myself gee, that must get so old. Can you imagine? One camera guy had even gone through security and gotten upstairs into to the carry-on scanning area (Great job, TSA). I wondered to myself if he had bought a ticket just to get up there and get a shot, or if he actually had a plane to catch and this was just a coincidence? What a bizarre lifestyle when you think about it. And one of the photogs was a girl just like me — in her 30’s, smartly dressed, looking like she just got off work at her office job.

LA is a surreal place sometime.

When I first walked into to the Southwest terminal it was like 90 degrees inside and of course I was juggling a suitcase, a giant purse, and a carryon and my sunglasses kept falling off my head and I really had to pee. It was starting to get so hot that I thought my face must be glowing, so I basically dropped everything, peeled off my jacket, and started to fan myself with my boarding pass (Operation Cool Down, by the way? TOTAL FAIL. Confidential to LAX: It’s 79 degrees outside. The heat inside? It isn’t doing anyone any favors). What I’m trying to tell you is that in that exact moment, I was so graceful and put together you could have called me Posh Fucking Spice. In fact, you should have called me that because I’m sure I also looked slightly anorexic, incredibly tan, and with perfectly coiffed hair (as usual).

So anyway, it occurred to me right then in that moment of absolute glamor, that I am so grateful that I have the luxury to be my giant mess of a self in anonymity. Did any of you catch that Britney Spears documentary (excuse me, “documentary”) on MTV the other night? What a shitshow, right? Her photog situation is unreal! I feel sorry for those having to live under a microscope. I know everyone says “Bah! They’re rich, that’s what you sign up for.” But honestly, is it worth it for millions of dollars to have your every move documented?

I’m gonna say no thanks. I mean, it never stops! If it’s not the paparrazi being all flash-bulby and annoying, then it’s some random Sacramento girl blogging about how you are wearing a suit while eating McDonald’s french fries– LIKE IT IS ACTUALLY NEWSWORTHY — all while she stares at you coyly across an airline terminal secretly wanting to know if Hayden Panettiere is as stumpy and weird looking in real life?

I’m generally not a huge fan of travelling for work. When I was younger I loved it — the glamour of driving a rental car (ha!), having a whole hotel room to myself, a new town to explore, and no one to answer to.

Though I’m now happily attached to my daily routines and don’t find travelling quite as glamorous as I once did, I still thoroughly enjoy having a whole hotel room to myself in which to indulge.

I’m blogging right now under the covers of my King Size bed as I listen to my favorite crafting podcast, watching Showbiz Tonight in the background on Mute on this ginormous flat screen TV, nibbling on some tasty munchies from Bristol Farms while reading bits and pieces of a fun new book in between it all.

Who says you can’t get a million things done while curling up under the sheets?