I got bit by the organizing bug this weekend. Does that ever happen to you? My bathroom drawers have been driving me nuts for quite some time and I just finally decided I just couldn’t take them anymore and set out to get things in order. Things look nice on the outside, but inside they are kind of a hot mess, kind of like The Real Housewives of Beverly Hills. 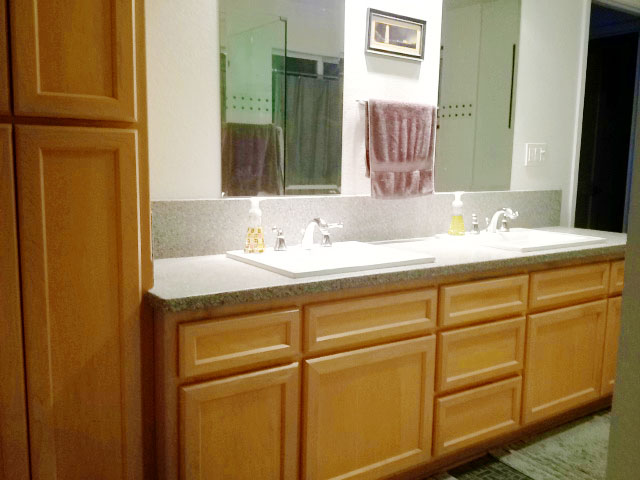 My side is the right side, Garrett’s is the left and we “share” the middle drawers. Wanna know a secret though? Nothing is really in the middle drawers, so obviously I decided that meant I could take at least one of those over too. 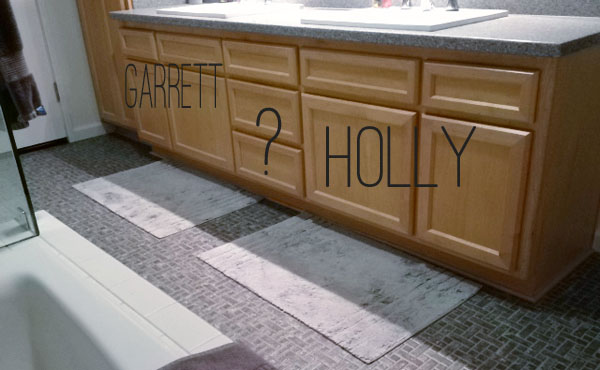 The reason I need to do some expanding is because my drawers just are not cutting it right now. I have three main ones and they are just overflowing with crap.

You see? Hot mess on the inside.

The first thing I decided was that my makeup is now going to have a permanent home. It’s been all crowded together in that pink stripey bag since Garrett and I started dating. Having to lug all of my crap back and forth between houses I just threw it all in a bag and never looked back. Well guess what: I LIVE HERE NOW AND HAVE FOR THREE YEARS. It’s time for my makeup to get a permanent home. And that home is the top middle drawer of our bathroom. 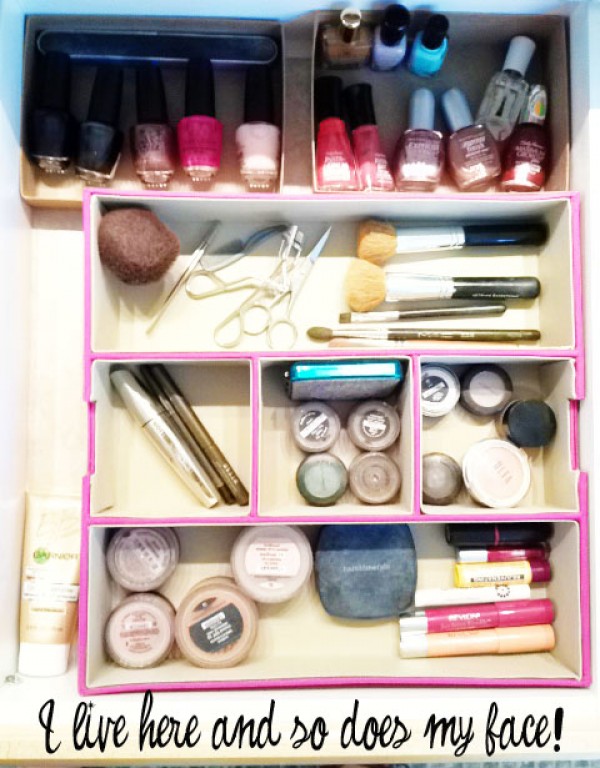 I was going to by some cheap plastic-y containers at Target, but they were $12 each and I’d need at least two, which isn’t that cheap in my opinion. Then I came across this hot pink baby for $6.28. Now thaaaaaaaaaat’s more like it. In went the makeup, and all was right in the world.

Then I tackled the Everyday Drawer. You have this drawer, right? Where all of the stuff is that you use every day?

Well here is mine AFTER: 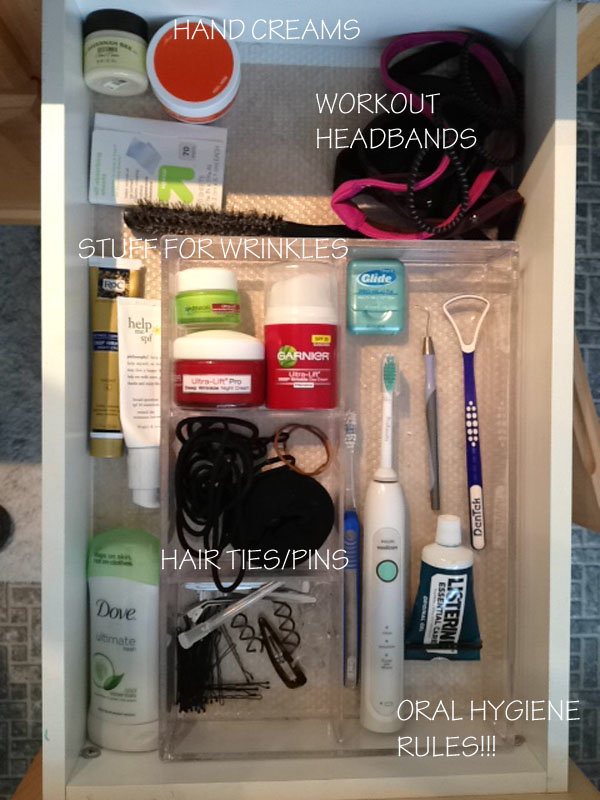 Lastly I straightened up my hair stuff, and what was left in the overflow drawer (which was not much) which included axing a flat iron that had been around since the early 90s and some other stuff that I just didn’t use EVER. And I was left with these two sparkly spaces: 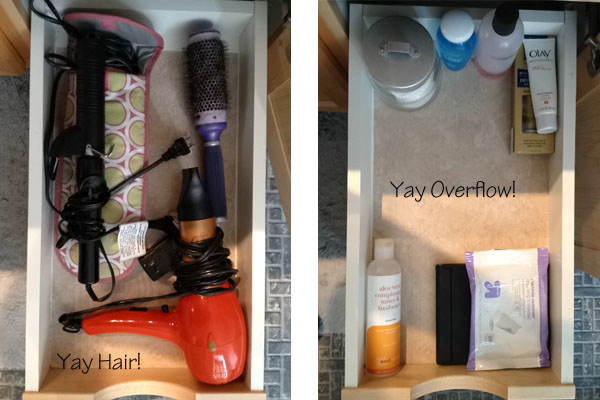 And by then, all of my bathroom dreams had come true! But I wasn’t done yet. I wanted to tackle my junk drawer that hides out in the top dresser drawer in my closet. OHMAHGAWD, just look at it: 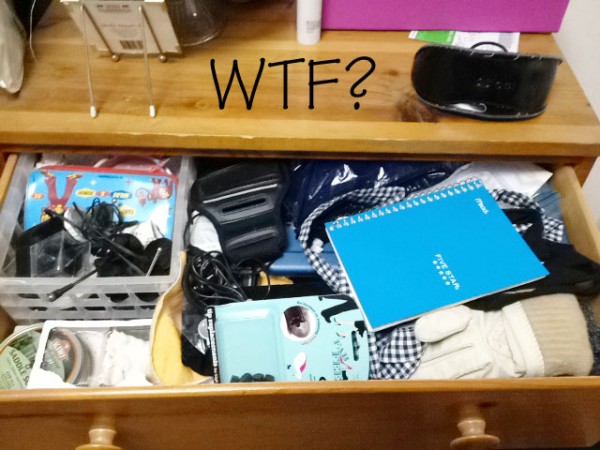 Let’s play a rousing game of What The EFF Is In Here?

The valentine I bought to give to Garrett this year and then promptly forgot about. WHOOPS. (What DID I give him, then???) 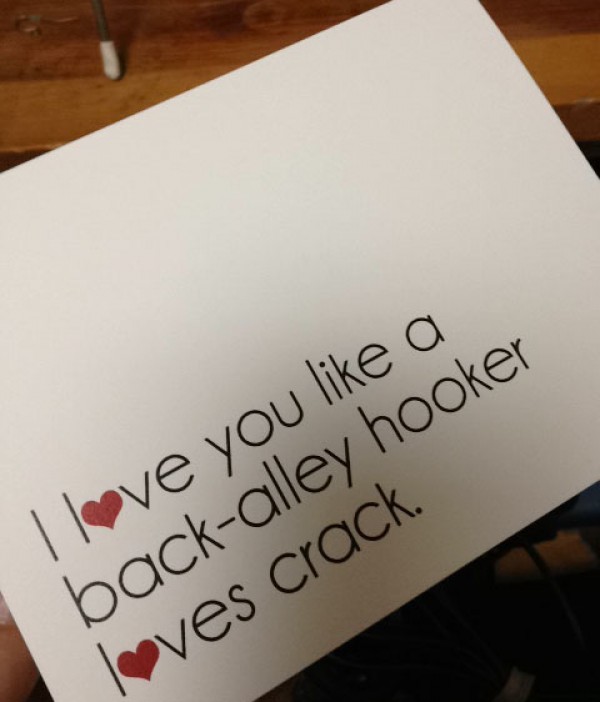 Guess we know what he’s getting NEXT year.

Oh, or how about a cell phone charger for a phone I don’t even own anymore? 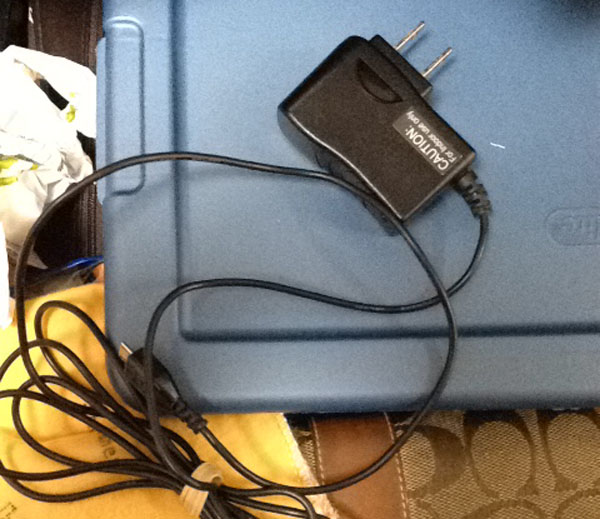 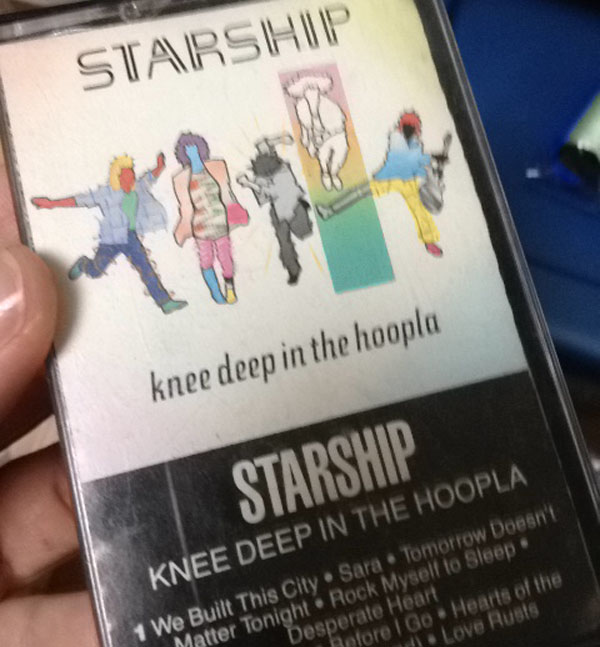 Or perhaps that reminder about my dental appointment. 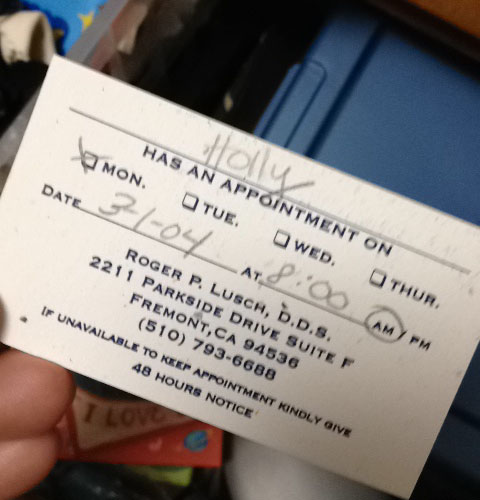 Ummmmm, clearly it was time to get out the trash bags. So trash I did (for most of it) and in the end I have some useful things and of course some nostalgic things — like my container with every card and letter Garrett has ever written me. Awwwwwwwwwwwwwwwwwwwwwwwwwww. 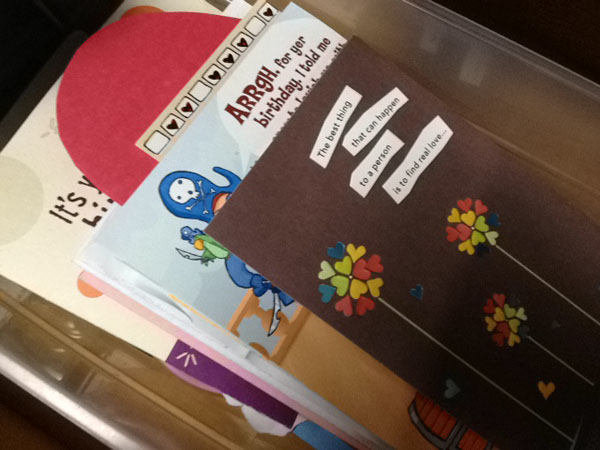 In the end it looked a lot more manageable, and I felt about ten pounds lighter getting rid of all of that Very Important Stuff I had been saving. 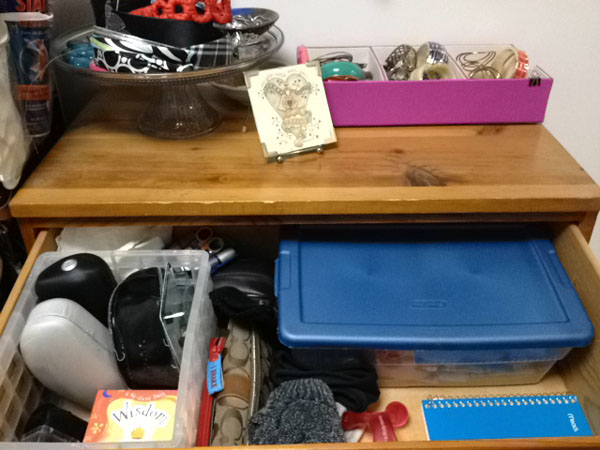 ******
Even though nothing in the bathroom looks different on the outside and my closet still looks exactly the same, at least *I* know it is cleaner on the inside. And sometimes that’s all you need to have a happy Sunday!