Your New Favorite Game: The Game of Life (As in: Get One) 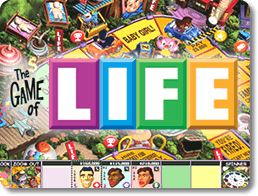 The rules of our new favorite game (maybe yours too?) require you to know that Garrett and I are homebodies. Our days of chandelier swinging and Friday night’s out on the town until the bars close ended years ago, and what has settled in its place on Friday nights is the desire to have a a good dinner, a bottle of wine, our PJs and the DVR. I know my 21 year old self cringes at the thought of this but you know, my 21 year old self once had a bench warrant out for her arrest because she thought she was above the law, so what I’m saying is consider the source. But that is what happens after you have been dating someone a million years and have your own stupid inside jokes and language and silly nicknames for each other — a night in can be just as fun! More so even, right?

Additionally, in order to understand to allure of this game, you need to know that my new(ish) iPhone is still a novelty in our house. Garrett has a flip phone circa 2002 or something and so the iPhone with all of its bells and whistles is still majorly improving our quality of life on a daily basis. For example, we generally keep it on the coffee table at night and when we are watching random things on tv and have very important questions like “Was Richard Roundtree the guy in Shaft?” It’s great because we can immediately pick up my phone and google it. LIFE CHANGING, right? I KNOW!!! (Speaking of life changing, google *has* become The Killer of Wonder — you should go read that hysterical link. Holy Moses, story of my life!)

Anyway, the other night we were watching Psych and wondering whether the lead actor, James Roday, was still engaged to his co-star Maggie Lawson. Obviously we took to Google immediately because: why wait? So I typed in James Roday and immediately google pre-filled my search with terms “James Roday Fat.” I mean…seriously? Poor guy. Sure he’s put on a few pounds over the seasons, but can you imagine googling yourself and having INSERT NAME HERE: FAT be the first thing that pops up? So sad. Garrett and I discussed what pre-filled searches for our names that we would like to see pop up and we agreed upon “Garrett Franklin: Pretty” (HA!) and “Holly Woodcock: Bombshell.” I mean, it could happen right?

I’m getting off topic here — the game. The game! So, basically for the last few days we’ve been trying to guess what the first pre-filled search terms are for celebrities. For example: Megan Fox. I guessed “bitch,” Garrett guessed “hot.” But actually Megan Fox: THUMBS is what pops up and WOW — is that disturbing! We’ve seriously been playing this game for days! It’s almost as fun as the game we play when Mad Men is over and we try and guess the RIDICULOUS exclamations that the characters will be making in the previews for next week’s episode. Previews that make no sense and follow no plot lines. Keep that one in your pocket tomorrow too, for a good time! Hours of entertainment folks.

Also proof that we may need to get out more. Either/Or.