Ohmygosh, FINALLY!!! A month where I could exhale and read a little bit. 5 books, in fact — which may not seem like a lot to most of you but after the slow going January and February, I was so happy to be back to reading at least a book every week!

Goal of Reading 75 Books? — I’m not giving up on you yet — even though I’m 8 books behind! Eek! Clearly this means someone is just going to have to whisk me away to somewhere tropical where all I’m required to do is read books on the beach and drink frosty beverages. Aaaaaah, memories…

Here, hang on one second…let me go put that on the Honey Do List.

Anyway, onto the books… 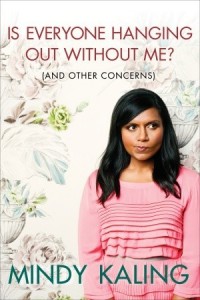 1. Is Everyone Hanging Out Without Me? (And Other Concerns) By Mindy Kaling

So, hearing this billed as Tina Fey 2.0, I wasn’t all that thrilled to read it. I mean, I enjoyed Bossypants well enough but not so much that I wanted to read the knock of version of it, you know? Also — I am sadly not a dedicated viewer of The Office. It’s a funny show, but I spend too much time juggling my DVR as it is that I just rarely try and get into sitcoms. That said, I enjoyed this book!

Mindy Kaling is funny and refreshing, and while this certainly is not the best book ever written — each chapter is completely unrelated so it doesn’t feel like the most cohesive work — they were mostly hilarious and fun to read. Reading her book made me feel like I wanted her to be my friend. She sounds like the type of person who you would want to be sitting next to at a boring party. 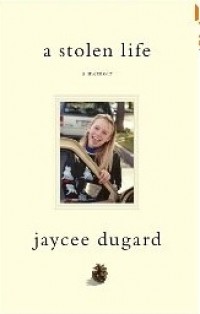 2. A Stolen Life by Jaycee Dugard HEY-O, shall we take a complete right turn? Because Jaycee Dugard’s book does not have AN OUNCE OF HUMOR in it. In fact it is totally disturbing and I just can not — I CAN NOT — get over the atrocities that she lived through for EIGHTEEN YEARS. And just a few hours away from her family the entire time! UGH!

Obviously it was a local story, so I think that is part of the reason that the whole book just freaked me out so much, but also you can’t help but feel like the authorities failed this little girl when you hear how many times there were options for intervention. Overall it’s just a harrowing story. The way it’s written isn’t particularly chronological, it’s sort of just memories of events that happened :::shudder::: and then her reflection on them now that she is free. Every cliche you can think of about human triumph in the face of adversity is applicable to this book. I don’t know how she wrote it. 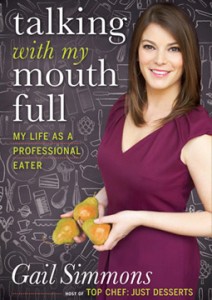 3. Talking With My Mouth Full: My Life As A Professional Eater by Gail Simmons
So we’ve already talked about this book a little bit, but at that time I hadn’t quite finished it. It got…marginally better, but the Top Chef Insider Info wasn’t all that juicy. I am actually glad I read it though because I did find it kind of inspiring.Inspiring, you say? But I thought it was poorly written, self involved, and not that juicy?

It was kind of all of those things — but mostly it was a portrait of a career path that was non-linear and I feel totally inspired by that. I love to watch people pursue their passions and make a living out of it. It’s so…not black and white. There are no blueprints for how to do what you love // love what you do, so when I come across a living example of that I like to tuck it away as evidence in mind for creative and professional inspiration. So even though this book wasn’t the awesome page turner I had hoped, it was definitely a testament of passion. So for that, I’m glad I read it. 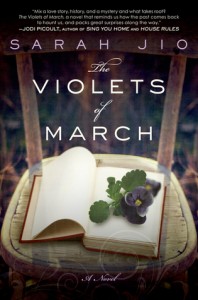 4. The Violets of March by Sarah Jio
So, I’m kind of embarrassed to tell you how much I loved this but here’s the deal: I did. I knew of this book, it was everywhere for a little bit, but it had that sort of flowery Jodi Piccoult vibe that I generally try to avoid so I never picked it up. Then I read the plot synopsis of Sarah Jio’s The Bungalow after reading this post and all of a sudden REALLY wanted to read that book. Unfortunately the hold list at the library was long, so I picked up Violets of March (it was just lying about, unloved on the shelf at the library) to see if I even liked Jio’s writing style.

Wow, this has gotten very off topic.

But the Cliffs Notes is? I did like it! This book ended up rocking because it was a story within a story (I love those! A mystery even…) that was told through an old diary, it took place on Bainbridge Island (which I just LOVED when we went to Seattle a couple years back, so I had warm fuzzy feelings about that the entire time I was reading) and then there’s a little bit of a love story in there. I mean, you guys it is SUPER FLUFFY CHICK LIT! (Or FWA-BWA as Garrett would say) but I loved it. If you’re into that stuff: Read It! 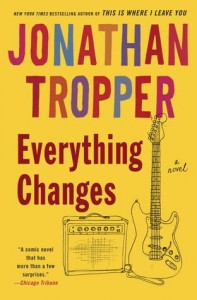 5. Everything Changes by Jonathan Tropper
So yeah, I’m basically a Jonathan Tropper Fan. If they had a fan club, I’d probably join it. Even though I found this slower than some of his other books to get in to, I just really loved the way describes people and things and he is just the kind of writer that I’m always in the mood to read. No matter what. And that says a lot, I think.

He is very nuanced at describing the psychology of relationships and can draw a comparison so accurate it hurts. He makes a book like this, where the plot isn’t really the driving force behind the page turning, keep you up all night reading. It’s pretty great. The only downside, and I wrote this on goodreads because DUDE — EVERYONE NEEDS THIS WARNING — is that I would have given it 5 stars except every time I picked it up and read the title I got that god damn 80s song of the same name in my head. And really? That I could have done without. But otherwise…pretty flawless.

Any must reads and recommends this month? Leave em in the comments. My library hold queue isn’t too busy this month, so I’m all ears!

Thoughts I Have Had While Reading Gail Simmons’ Memoir So it’s memoir month around my house, apparently. This is what happens when you are cheap and mostly check out books from the library. All of my Library Holds showed up at once, they were all memoirs and it doesn’t really matter if  I am in the mood to read them or not. For the record: I’m not really at this moment, but I am making due. My life of first world problems is so difficult, let us all have a moment of silence.

Currently, I’m reading Talking With My Mouth Full by Gail Simmons, who is not only a Top Chef judge, but a Food & Wine Magazine aficianado and clearly Padma Lakshmi’s Terrible Outfit enabler. A complex woman, obviously. I’m also reading the Jaycee Dugard memoir A Stolen Life, but you don’t really want to know about the thoughts I’m having while reading that book, so let’s just get back to Gail.

I was actually very excited to get my filthy mitts on this book because I have super pink puffy heart LOVE for Top Chef. (Really anything on Bravo, but I think we already discussed that.) Anyway, I was curious about Gail and her career trajectory and how she ended up with this offbeat career, and so I was excited to see how it all played out. And then I opened the book and all my thoughts started flooding.

While I won’t say this is the worst book I’ve ever read (it’s totally not!) the beginning was just…not very compelling. Especially when she talked about food. There was one passage where she wrote about her time working in Daniel Boulud’s kitchen (Daniel Boulud! The cuisine he cooks probably deserves many adjectives!) and it read something something like “The blackberry cobbler was purple. Also tart. The seeds got in my teeth.” Short choppy sentences, lots of telling, not showing. Very little description. Stark contrast to other food memoirs that I’ve read. I mean, I’ve read Ruth Reichl passages that made me need someone to bring my inner-hedonist a towel to mop up my drool, you know?

Thought # 2: Jeffrey Steingarten is a total weirdo. And yet I would TOTALLY work for him if I ever had the opportunity!

I mean you guys, when Gail worked for him all she did was shop, cook and eat. This is my ideal job description.

Sure it sounds like she was doing that amazing job in a dark apartment that smelled like goose-fat with a condescending, chocoholic ogre who has a very refined palate but a very UN-refined set of social skills, but still: How do I get a job where this is all I do. I could get used to smelling like goose fat. I think.

I mean, how can it not? Check out how fun it looks! Here is the thing, I love my Paleo eating, but I would happily slurp a plate of spaghetti with Mario Batali. I mean COME ON! The book finally gets good when she starts talking about it, and her description of it made me want to go IMMEDIATELY. That was my sly way of saying the writing has improved slightly. Did you get that? Ok good.

I’ve started reading the blog just to torture myself.

Anyway, I’m almost done with it and it’s not the best memoir I’ve ever read, but it moves fairly fast and she’s starting to dish on the Top Chef contestants/meals so you know I’ve gotta get in on that action!

6 Comments
POSTED IN: Gail Simmons, I Read Celebrity Memoirs So You Don't Have To