I Love These Ladies Like A Love Song, Baby

I think we can all agree that if one cannot find the energy to recap a weekend until a Wednesday, it was a very good weekend, yes?

As a consolation for the fact that I had to back out of The Blathering this year (WEEP!), I invited AndreAnna and Liz to come play for the weekend, and play we did!

AndreAnna arrived Thursday and I’m pretty sure we didn’t stop talking until we realized it had slowly turned into The Middle of the Night and if we wanted to actually make it through the next day, we needed to go to bed IMMEDIATELY.

Friday morning, you know we had to workout. AndreAnna was one of those people who made me feel like I could maybe, possible, hopefully, actually survive CrossFit — so the weekend could not go by without us actually busting out a WOD side by side. Fun times! In order to balance out the bad-assery of our morning we headed out to get manis and pedis and then OBVIOUSLY shopped until we dropped.

Friday night Liz rolled into town and we wasted no time — no passing go or collecting $200 — it was time for cocktails and some fireside chat! And some fireside double unders, which also go well with cocktails in case you are wondering. If you haven’t tried to jump rope a bit tipsy in flip flops, I dare say you haven’t lived. Also: I need one of these magic jump ropes STAT! 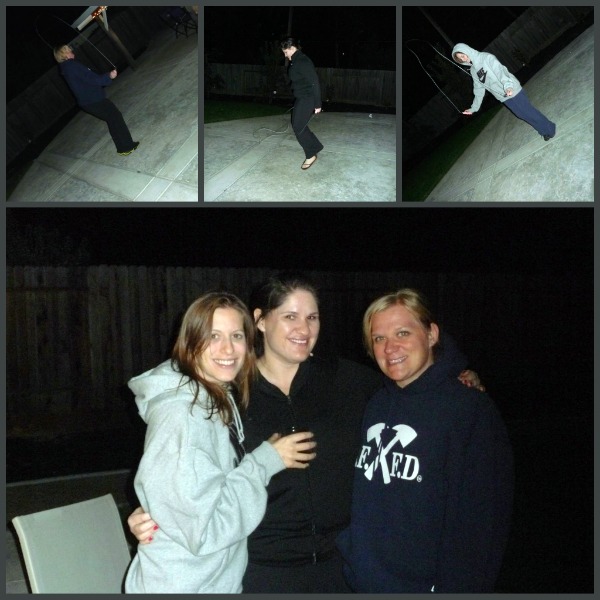 You would think this would be the point in the evening where Garrett would say to himself, “WHAT THE HELL IS HAPPENING IN MY HOUSE?” but honestly, I think he was a smitten kitten, and could not have been more entertained by the three of us goofing around. I mean AndreAnna kept him in stitches, and within about 5 seconds of meeting him Liz dropped some serious Formula One knowledge on him, so it is safe to say that Garrett ALSO loves them like a love song. Saturday we headed out to Sonoma in search of the quintessential California Combo of wine and cheese. I mean, it’s kind of a must, right? The plan was to grab some sandwiches at The Sonoma Cheese Factory but first we had to stop over at Swiss Hotel for some Glarifees.

(Thank you Gina for turning me on to these a few years ago — they have changed my life and I’m sure now AndreAnna and Liz would say the same!)

What the hell is a Glarifee? Imagine the best Irish Coffee you have ever had, but more foamy and delicious and ICED! And there you will have it. It is worth it, and if you are ever in the are, it is a MUST TRY. Trust me on this one. Of course we eventually got our sandwiches. I have like 5000 version of this same picture and every single time it tastes even BETTER than it looks. I’m not too much of a bread eater anymore, but there are just some things for which there are no substitute and a sandwich at the Sonoma Cheese Factory is one of them. Then it was off to Sebastiani Winery, and I’ll give you one guess as to what we did there. A quick stop for some “dinner” on the way home and we were ready to hit the town. (Why yes, this did end up proving to a be a poor choice for “dinner” prior to a night out, thanks for noticing. Rookie Mistake.)

Saturday night found us out at Faces, which I have to say after 10 years of living here in Sacramento is still the best place for a night out that includes cheezy pop, ridiculous rooms to dance in, strong drinks and hot gay men go-go dancing on the bars. We put on our fancy clothes and headed out to enjoy JUST THAT! Of course a few cocktails later we may not have looked quite so pulled together, but still having a blast! Sunday morning required A LOT of coffee, a greasy breakfast at Tower Cafe, and a good amount of time couching. I mean where else were we going to brainstorm theories of why Selena Gomez is so cute and Demi Lovato looks so bootsy, even though they are the same age? Deep thoughts, you know. WE HAD LOTS.

I think that was the best part of this weekend, looking back. It’s fun to be able to email and tweet and facebook and text, but there is nothing quite like sitting on your couch shoveling pizza in your mouth with no shame. Or booty shaking to Robyn in the living room. Or dropping blenders full of margaritas on the patio and being able to do little more than laugh hysterically.

These are the moments that you can’t have while sitting at a computer all day, and I feel so lucky that we got to have an entire weekend full!

These are my people. And it was TOTALLY WORTH IT!

The rest of the weekend photos are here if you’d like to have a look. Half naked go-go dancers is all I’m saying. HALF NAKED GO-GO DANCERS.