The alarm goes off at 5am.

We are getting SO MUCH more sleep lately, but 5am is still early no matter what. One of us brews cups of coffee and Garrett and I do the morning stuff. Getting Holden’s food + clothes ready for daycare, packing lunches, figuring out breakfasts.

By 5:30 one of us is showering. We ro sham bo for who has to go first. The first person to shower misses out on a few quiet minutes to scroll their phone and exhale. But the second person to shower has to squeegee the glass doors. They each have their upsides. Some days neither of us shower and we steal an extra 30 minutes of sleep. A few days a week I definitely opt to go to work with my hair full of dry shampoo and secrets. 🙂

By 6am Holden is stirring. I’m usually somewhere between my skin care routine and makeup. One of the things I’ve become even more committed to since having a baby is making time for all of my crazy face lotions and potions. It’s a little victory each morning and night. A spot of time for myself to just do nothing else but let the serums sink in. I look forward to it.

Holden is 16 months and usually wakes up babbling some of the words he knows. It’s very amusing and he usually lays there for a good ten minutes chatting through a combination of “HI!” “Elmo!” or “Uh oh!” over and over again. I am always excited to see his face in the morning. This phase of parenting right now — where his language is exploding and he is just communicating and laughing (and ok, throwing tantrums too) — is just SO. MUCH. FUN. Still busy, and all consuming, but man we are laughing a lot. If I had to pick a photo to sum it up, this recent one is it: 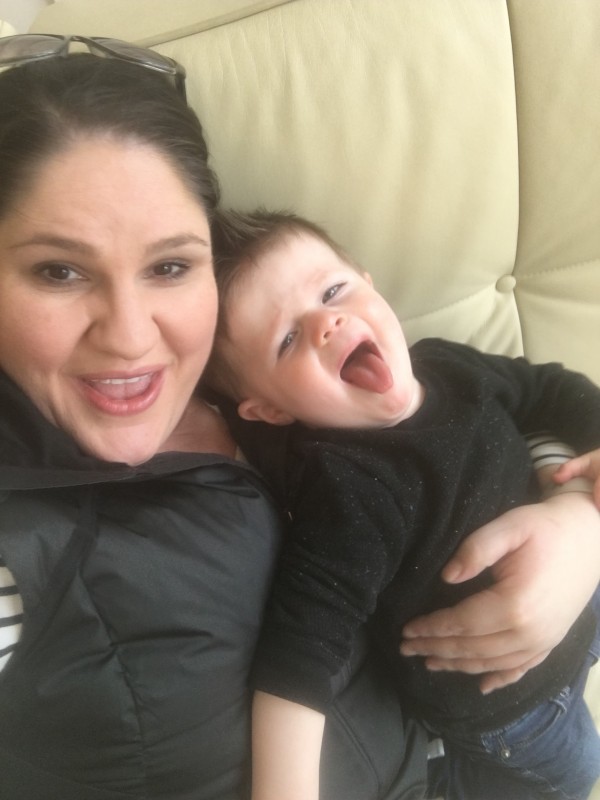 While I’m half ready for work, around 6:15, Garrett and I go get Holden and do the wake up routine, diaper change, song singing, getting him dressed all together. He’s so wiggly these days that it’s kind of a full contact sport. But it is one of my favorite times in the day because he is all BABY. He is growing so fast and there is just so much LITTLE BOY in him, so it is fun to start the day picking him up from his crib and seeing him in his little sleep sack with his pacifier and his lovey next to him. It makes me feel like he is still my tiny little baby. 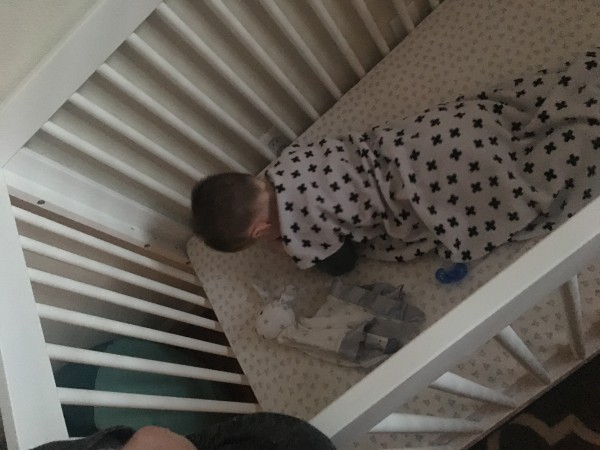 Garrett goes off to get dressed and ready for work and Holden and I head out to the kitchen for his breakfast. We inadvertently weaned him from his bottle a few weeks ago so it’s usually oatmeal or yogurt while I chat with him about his day ahead at “Charm School” (what we have lovingly dubbed Day Care) and put on his shoes. 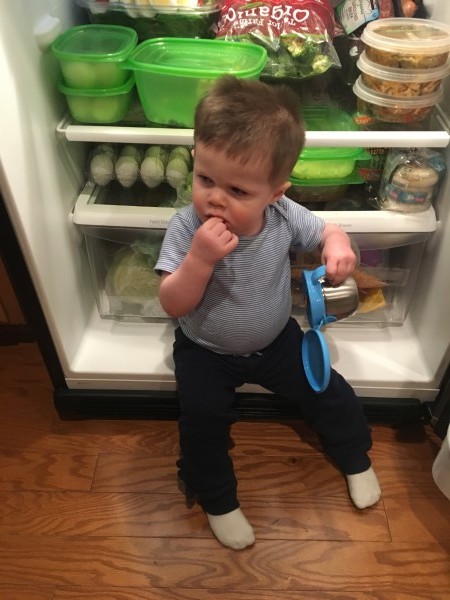 By 6:35am Garrett and Holden are on the road. Holden’s daycare is a block away from Garrett’s work, so most of the time Garrett handles drop off and pick up. I have a few minutes to myself and I spend them cleaning up our breakfast mess, folding up the blankets on the couch where we probably fell asleep the night before. Basically tidying the house so when we get home it’s calm and welcoming. Then it’s off to get ready. 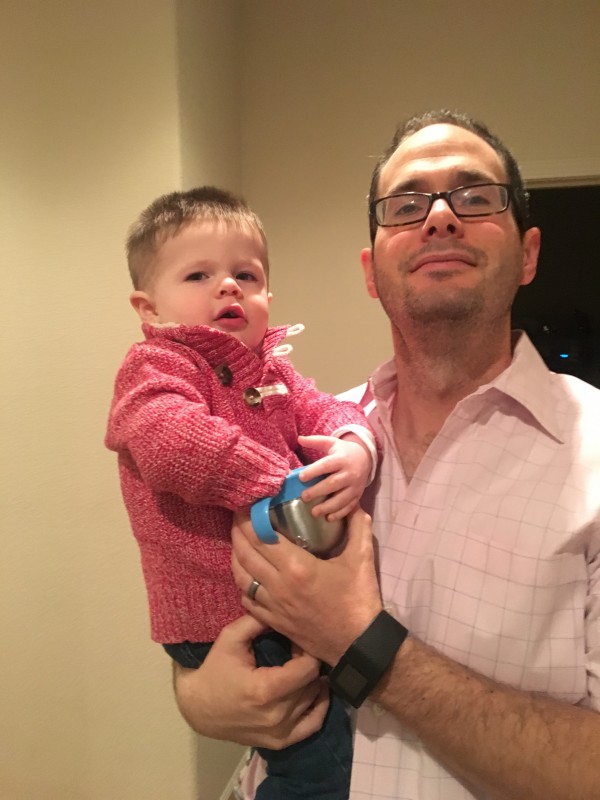 For about 20 minutes I hair and makeup. It’s no glam squad situation but I get it done.  I’ve tried a bunch of different clothing subscription services lately and the one I like the most is Trunk Club by Nordstrom. I recently decided that I just can’t hang with baggy or saggy jeans anymore so I ordered a “Trunk” with a million pairs of jeans that are higher waisted (LOOK AT ME! GETTING OLD AND PRACTICAL!) and asked for a a few more premium denim brands. I felt like every other month I was buying another ill-fitting pair of Target jeans to solve the problem and I just ended up with 10 pairs of jeans that don’t fit right and AINT NOBODY GOT TIME FOR THAT. I found 4 pairs of nice jeans that stay put and look nice and have NO REGRETS. It’s the little things these days, and not tugging on my pants at work has been a real life upgrade, ya know. 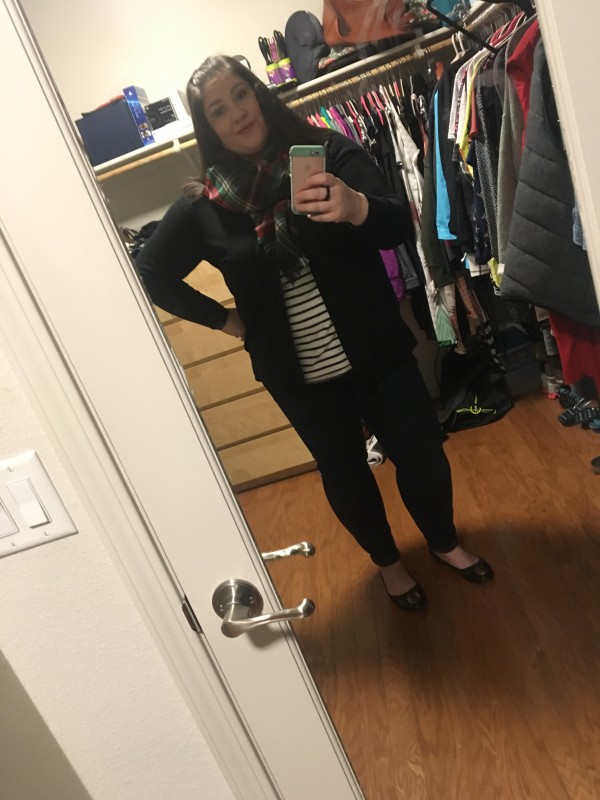 By 7am I’m out of the house and on my way to Starbucks. One of my credit cards does cash back rewards and a few months ago instead of just boringly applying them to monthly bill, I decided to turn those rewards into Starbucks gift cards. I only drive through if I have a gift card, and it actually does kind of feel like someone else is buying me coffee. I know that this math isn’t quite economist approved, but it works in my head. And I’m off on my commute!

My drive to work from our new house averages about 45 minutes. On Fridays it’s only about 28 but some Mondays take almost an hour. Before we moved I thought this would be the hardest part of living in our new neighborhood. Previously my drive to work was about 11 minutes and all on surface streets. But if you can believe it, I now look forward to the drive on the highway because I catch up on podcasts or chat with my mom, or listen to audiobooks. Plus it’s actually great decompression time on the way home.

By 8am I’m at my desk typing away, attending meetings, thinking strategically, having critical conversations — you know the drill. WORK STUFF. My days are full right now, but I’m pretty satisfied professionally. You know, except for those Monday mornings when you walk into BSOD.

I’m back on the road at around 4:30 and usually home by 5:15. Garrett and Holden have usually just gotten home and we read Holden’s Charm School report card and talk about his day. If I’m being honest, this is mostly a poop related updated (#PARENTLIFE) but it is always fun to see what they did and how he was feeling. We are so grateful for a wonderful daycare family and for our Happy, Independent little boy. 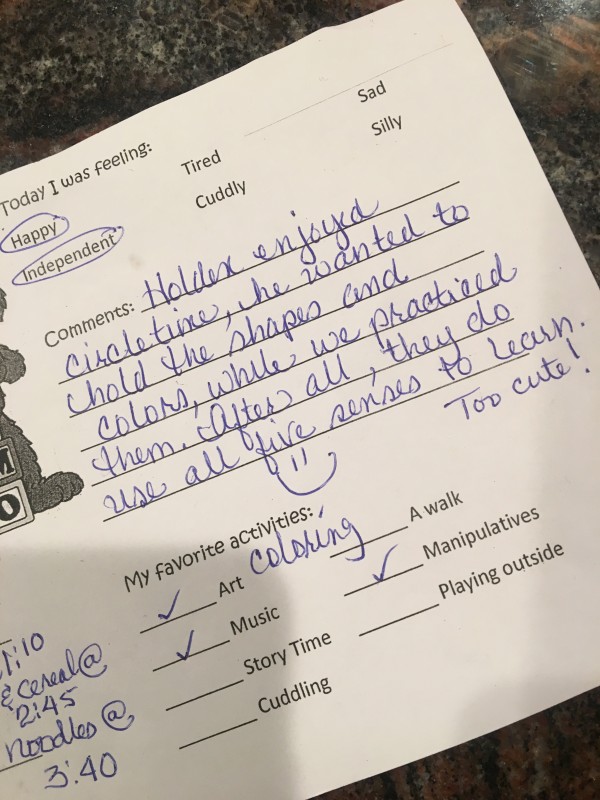 By 5:30 Holden is usually ready to eat, and I’m sad to admit we are usually not organized enough to have dinner for ourselves on the table by then. We eat a little later and usually just sit down and chat (and snack, let’s be honest) with Holden while he eats. He still needs to be fed some things, but he is doing a pretty good job of getting to know his fork and spoon. Sometimes one of us will get dinner started depending on what’s on the menu. Meal Planning and healthy eating are getting a solid C+ about 16 months into this parenthood gig. Some weeks we have our stuff together and prep food on the weekends and just nail it. Other weeks when our work schedules are crazy, we rely on take out or convenience meals. Definitely a work in progress at the Franklin house. 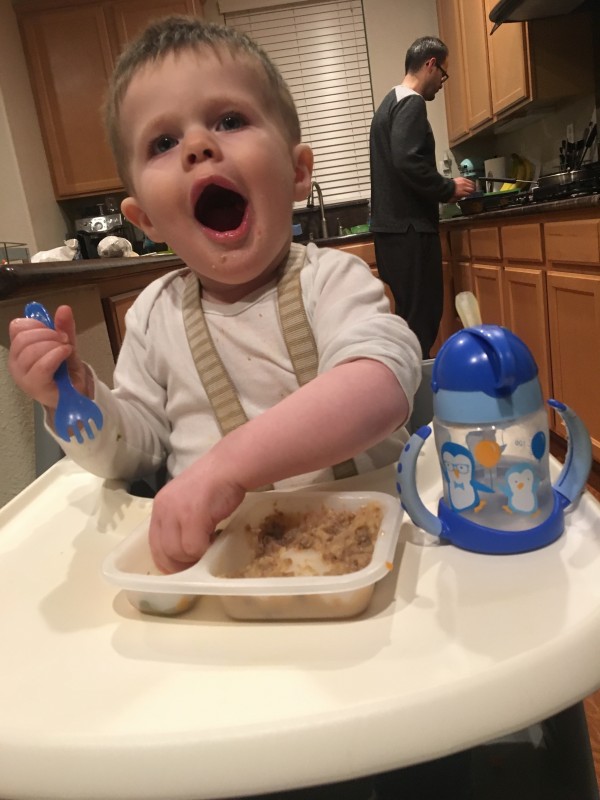 After dinner we clean up, get in our PJs and play. Of course depending on what was on Holden’s menu sometimes there is a bath involved in there too. Post dinner play time is always a blast. Holden is at a really fun age and just wants to entertain us. He is so interactive and talkative and into pushing his boundaries. There are a lot of giggles, sometimes tears, but mostly it is so fun and fascinating to see how quickly he is developing new skills. I’m still pretty amazed how far we’ve come over the last year. I mean a year ago he was just a squishy little baby. 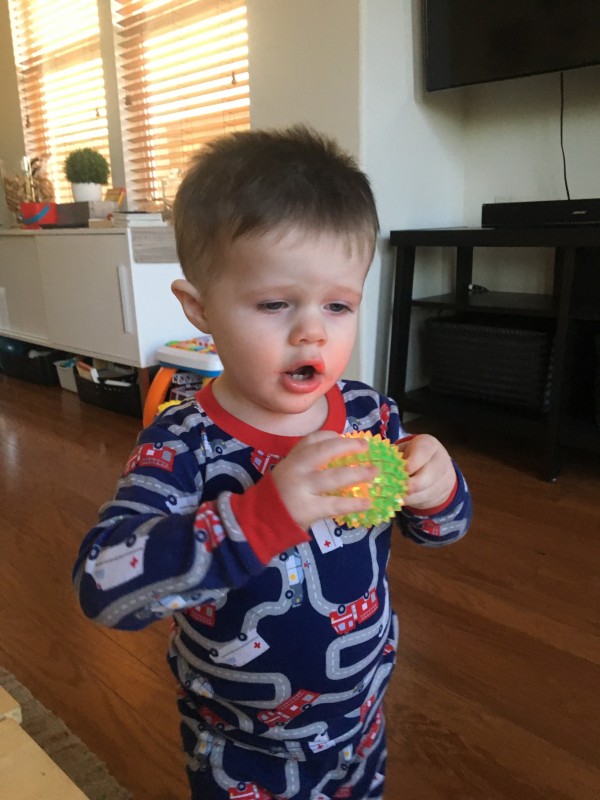 Not gonna lie, sometimes after dinner we try and talk Holden into curling up on the couch with Mom and Dad and watching a show. 🙂 His favorites are Vampirina and Mickey Mouse Club House, but he’s not super into TV right now. He’d much rather climb on and off all of the furniture. I am just hoping he makes it through toddlerhood with all of his teeth in tact. YIKES. 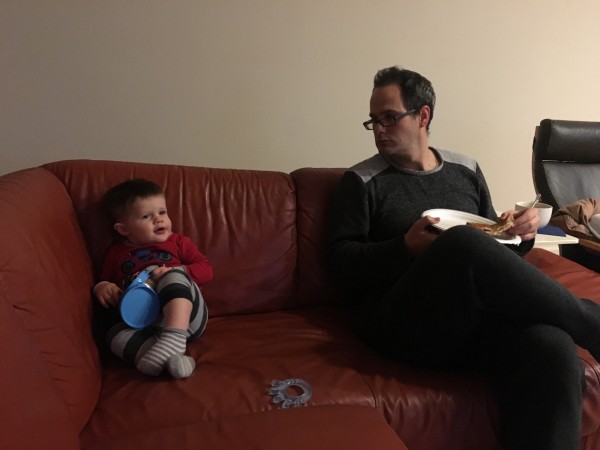 We start the bed time routine around 6:45 and we get him in his sleep sack, read books (Favorites right now include basically ANYTHING Sandra Boynton) and then we say goodnight to the house. Goodnight fireplace. Goodnight TV. Goodnight Dining Room. Goodnight Hallway. Goodnight Bedroom. Goodnight Mama. Goodnight Dada. Goodnight Wesley (his lovey). Goodnight Holden…and down baby goes to get some sleep. All I can say is that our sleep coach was the best money we ever spent, and once he is down, Holden will sleep for about 11 hours. THANK YOU SLEEP GODS.

By 7pm we are finishing up cooking dinner, eating, doing dishes, cleaning up the kitchen and we try and do one house maintaining chore in the evening. Sometimes that is a load of laundry. Sometimes that is boxing up Amazon returns. Sometimes it’s cleaning the fridge out or making a grocery list. Sometimes it’s paying bills or rounding up an amazon order of last minute things we forgot to buy the last time we were at Target (I’ve said it once and I’ll say it again — HOW DID PEOPLE PARENT WITHOUT AMAZON? I don’t know.) But we always try and get a few little things done and then really? IT’S TIME TO SIT DOWN.

Garrett and I are watching a few shows together: Vanderpump Rules, Top Chef — so sometimes we watch TV. Other times one of us will say “How about we just scroll through silly stuff on our phones and have a moment of quiet.” (Usually it’s the person who lost the ro sham bo and had to shower first that morning. haha) And by 8:30 we are ready to wind down and get ready for sleeping. Teeth brushing and teeth flossing and face washing — OH MY! I’d say we consistently get in bed around 9pm and one or both of us will attempt to “read” which basically means read 5 words and fall asleep. When my head hits the pillow these days I am ready to crap out because I know that alarm will come early tomorrow.

We’ve figured out a lot of new routines but we are still struggling with eating well (or at least somewhat how we used to eat) and OBVIOUSLY fitting in fitness. We miss both, but there’s not a great gap of time in our week days and if I’m being realistic, we probably need to be focusing on meals that take 20 minutes or less. Sometimes I get a little too ambitious on the weeknights and then we are too hungry to execute and just get Chipotle. If you have any quick, healthy recipes I am all ears!

On the fitness front, I recently bought a Peloton in hopes that I could just roll out of bed and squeeze in a 30 minute ride, or hop on the bike before I eat dinner — so we’ll see how that goes. If you have one, how are you liking it? Any advice?

Honestly life is really good lately. But also I have never more fully understood the old saying “The days are long, the years are short.” I wanted to write this all down because I want to remember this season of life. The season where our days were full of joy, endurance, laughter, and probably a few too many frozen pizzas. Some day, these days will be the good old days. 🙂

7 Responses to What Life Looks Like Lately – Weekday Edition