On Big Leaps + My Own Upper Limit + Changing the Story

I read an incredibly eye opening book a couple of weekends ago. It was called The Big Leap by Gay Hendricks.   While it didn’t immediately dazzle me with life changing epiphanies, I have been thinking about it so much over the past two weeks I wanted to mention it. 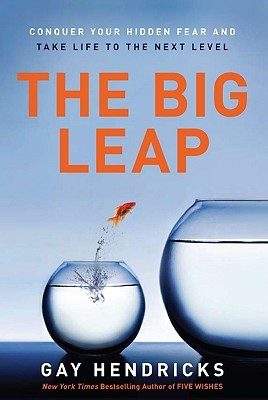 I will start by warning you it is very self-helpy (WAIT WAIT — DON’T GO!) but since I knew that going in (it was a Cynthia Pasquella recommendation when she was on the Underground Wellness Podcast and it was a “Transform Your Life” episode, so you know — self help was sort of a theme) I found it pretty easy to tolerate. You don’t have to be a self help enthusiast to enjoy this book, but I do think, at the very least, you have to be the kind of person who can suspend judgment of self help books long enough to parse out the good bits for your own use. These days I don’t read “Improve Yourself!” books as much as I did in my early 20s, but I do like to find new ways of thinking about things, and I’m always open to at least hearing about a new perspective. If I don’t think it works for me, I don’t use it. But every once in a while, as with this book, I find the new perspectives refreshing.

On the off chance  are NOT one of those people I wanted to share a couple of ideas that had the most impact.  When I finished this book I wasn’t really over or underwhelmed. But now that I have marinated on it for a few weeks, I have not stopped thinking about some of these ideas.

The Premise – We All Have Upper Limits

To give you a quick bit of context, the book mostly deals with the topic of self sabotage and why we do it.  Yes “we” — because everyone does it. Whether you enjoy touchy feely books or not, I think most people can admit there are times in life when we really WANT to do something, or achieve something, yet inevitably things keep happening to get in our own way. Hendricks makes the assumption that we all have the capability to achieve all of our great desires, but calls this space of self sabotage between wanting to do something and actually doing it, an “Upper Limit Problem.” Here’s a little excerpt to clarify:

When things are going well for us, our Upper Limit mechanism kicks in and we suddenly start worrying about things going wrong in some way. We start to justify those worry-thoughts with more worry-thoughts, and soon we’re manufacturing scenarios of things falling apart, coming unglued… Worry is an addiction.

So, like I said: Self Helpy. I can read through that and find reason to roll my eyes, and sort of discard the generality of it. HOWEVER, later on in the book he gets a little more detailed about how we manufacture these Upper Limits Problems for ourselves because we have false beliefs (mostly based in fear) about who we are or how we see the world, and that those hidden barriers are what actually stand in our way. Identify the hidden barriers, reframe them, and then get to accomplishing!

I know, we are dangerously close to joining a cult and singing kumbaya — hold tight for a few more paragraphs.

He details the most common “hidden barriers” to overcoming your Upper Limits and honestly that is where I clearly saw some of my own patterns of behavior. Here they are in cliffs notes form. I found it helpful to think of a particular Upper Limit Problem I have in my life (eg: my struggle to just do the things I know I need to do to lose the weight I want to lose. More on THAT later.)

Hidden Barrier One: Feeling Fundamentally Flawed – You feel that something is wrong with you.

Hidden Barrier Two: Disloyalty and Abandonment – You refuse to expand and embrace true success because you feel that if you do, you will have to leave your friends and family behind and you do not want to be alone.

Hidden Barrier Three: Believing That More Success Brings a Bigger Burden – If you have feelings that somehow you are a burden to others, those feeling will immobilize you and prevent you from rising to your true potential.

Hidden Barrier Four: The Crime of Outshining – You believe that if you become too successful you will make others look bad. It appears that Hidden Barrier Four is prevalent among gifted and talented children, and often continue to play out in their adult lives.

The Solution + My Own Example

So hey — that’s A LOT of inner child stuff AMIRIGHT?

But as I mentioned earlier, the idea is to find areas in your life where you have an Upper Limit Problem — and then make yourself aware of when you are using one of those hidden barriers above as a crutch or a reason why your desire just can’t come to fruition. And then, of course, reframe the story in your mind and make that Upper Limit Problem your bitch. Hendricks doesn’t say that, but I’m sure he means that.  🙂

I have found this stuff fun to chew on in the last couple weeks. Full disclosure, my Upper Limit Problem has really been making my weight loss journey my bitch. I have succeeded before, I know exactly what to do over time, I just continue to find speed bumps that keep from doing what I need to do consistently. And guess what? I’ve been using ALL FOUR of those hidden barriers in a variety of ways.

The biggest crutch that I’ve been using over the last year is that I can’t have great career success at the same time as having great weight loss success.  And I’ve done a really good job of talking myself into that being a FACT. Like somehow I am (lightbulb) FUNDAMENTALLY FLAWED and career success and weight loss success both together is just too much at once. I have honestly thought to myself (many times, sadly) that juggling these two things together just are not for me. That other people can succeed like that but I can’t. HOW LAME IS THAT?

I don’t think I would have connected the dots on how obviously I was doing that had I not read this book. Sure, I had to sift through a lot of touchy feely stuff, but to finish this book and realize — hey Holly, your thinking is SUPER flawed on this subject and you actually CAN do both at once and it is a fearful part of your brain that is holding you back — is a large enough epiphany for me to think that it was worth it.

Over the past few weeks I can’t tell you how many times I have been about to make a decision that completely undermines my own weight loss goal (a goal I am completely capable of achieving — hell I’ve lost 100+ lbs before. I KNOW I can lose weight) by rationalizing it with this weird career/health dichotomy thing that I have made up in my brain. As if the two just can not co-exist. It’s been empowering to look at that thought pattern and make a different decision. One that actually pushes me toward my goals. Being aware of the hidden barriers, and acknowledging their falseness has allowed me to change my own story. And so far it is making a world of difference.