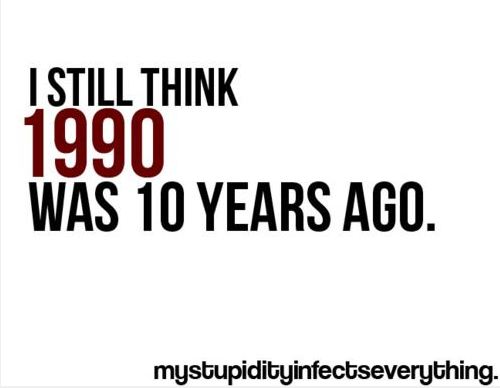 I can’t believe I turned 35 yesterday and you know why? Because I can still so vividly remember my 23rd birthday.

I went out to dinner with friends and wore a black and white striped tank (my style choices have clearly remained consistent, ha!) that I hemmed and hawed about in my mind because I thought my arms were too flabby. Ultimately I talked myself into it because “I was too old for this body shaming bullshit.” Ah, yes. Much too old!

My hair was dyed some wonky reddish color, as was the norm in those days, and Jimmy Eat World’s Bleed American album was blasting on repeat in my car. I had picked a Cuban restaurant because I was feeling oh-so-very worldly in all of my 23 years, but was shocked when the Pollo Asado I ordered showed up and and was CHICKEN WITH A BONE IN IT!

We all were sort of underwhelmed by the food, but mostly I think because it wasn’t Tito’s Tacos or In-n-Out.  I hadn’t really learned to cook yet, you see, or rather I hadn’t learned to cook things that didn’t come out of a box so my palette was limited. But truth be told, in those days I’d rather drink my calories anyway, so no big deal.

It was a good night, with fun folks, but it was also a weird time. Weird because I was living 6 hours from most of my friends and family and had only sort of found my tribe. Weird because it was a month after 9/11 and our entire country was still so confused. Weird because I was super unhappy in my job but hadn’t the slightest idea on what to do. Weird because I was so unhappily single. Weird, because 23 is right smack in the middle of your twenties and there is nothing NOT weird about that entire decade as I look back on it in my rear view mirror.

I am so, so happy to be in my 30s. I want to shout that from the rooftops all day long. But 35. Something about 35 just has a certain sound about it that I am not quite used to just yet.

“Your butt starts to sag when you’re 35, you know” said my hilarious co worker.

“I hope you don’t want to have kids at that age” said a SUPER RUDE person in an elevator recently.

It seems to be an age with so many expectations and yet disappointments waiting around every corner. I’m not quite sure yet what to think, but usually I feel super renewed on my birthday and ready to see what comes. While I had a SUPER FUN birthday weekend, and a great day on my actual birthday shopping with my mom, I’m not quite feeling the zest I usually feel. Am I crazy? If you have a birthday pep talk, I’m all ears.