I had such a fun weekend (that did stick pretty closely to my To Do List — LAME) and I don’t have a single picture of green beer to show you! Ah, how times I have changed. I have this one though, which may be a close second. I highly recommend crappy Blueberry Odwalla and Champagne. Speaking of times changing, my Timehop for Saturday made me laugh out loud. You have to admit, the similarity is kind of alarming: 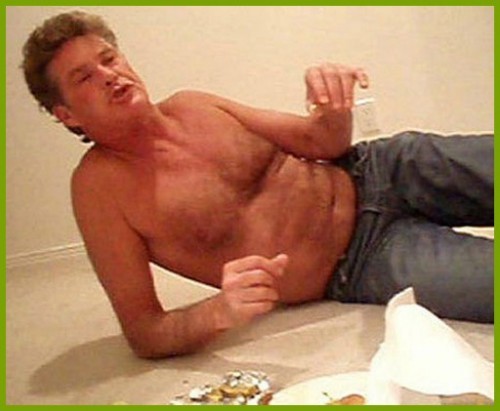 Anyway, drunk celebrities aside — we crammed a lot of things into this 48 hour period.

Including buying a car! We weren’t really planning on picking up a car (though we definitely could use one, both of our cars are OLD!) but I have a friend at work who just got a promotion that included a Company Car so she was selling hers, and well…it just seemed like too good of a situation. A single owner and a well cared for car for a great price. What’s not to love? Plus, it will be a great car for us over the next few years when we do the whole Expanding the Family thing, ya know? I think it looks cute in our driveway! Plus, do you want to hear something crazy? This will be the first summer that both Garrett and I will have had working Air Conditioners in BOTH cars in about 5 years. Crazy, right? Especially crazy when you learn that summer here includes MANY days where it is over 100 degrees. I also had time to pour through some cookbooks on Saturday and make a fun meal plan. It’s been so long since I’ve really had fun in the kitchen — I’ve mostly just been getting dinner on the table, which is sooooooooo different — so I’m excited to get back to making some new things this week!

Sunday was pretty leisurely — I thought about retesting Wod 12.2 (for about a second) but in the end I’m okay with my score. I ended up doing 219 but afterward I felt like I probably should have shot for 250. Aw well…live and learn! Instead I decided to go for a walk with the dog over at the park by our house. We ended up actually running most of it and I was SO DAMN GRATEFUL to be running. It felt so good to not have any knee pain and just be out on the trail and trying to keep up with the dog. Yep, Buster can run a little faster than me when he gets rolling…how sad is that? ha! That’s my next goal, outpace my little dog! 🙂 He came home all tired out and we spent the rest of the evening lounging and then chowing on some Corned Beef and Cabbage. It may not have been like one of the wild St. Patty’s Days of Yore, but I’ll tell you what, it was a good one.

Did you do anything wild and crazy this weekend?