November is here, fall is ramping up, the weather is amazing and life is good. October was a great month, despite the fact that I ate my weight in Halloween candy more than once, and I’m looking forward to finishing up the year feeling relaxed but accomplished. I think my goals are reflecting that.

I had 4 main intentions for October

*Successfully go without caffeine for 30 days

Well, I did it, but I’m not sure I would call going without caffeine a success. It sure was informative though. If you missed it, here were my thoughts on that. Sadly this past Saturday morning I woke up and had 2 whole cups of coffee throughout the morning and I was literally SO AMPED I was uncomfortable. My tolerance level was definitely affected, which in the end is a good thing I guess. Starting tomorrow we are brewing half decaf at home!

*Run a half marathon

Hooray, I totally did that!

And as I’ve already said, it’s kind of lit a little bit of a fire in me. I’m trying to keep the heat from that fire under control for the rest of the year because I don’t want to go and put a bunch of running events on my calendar and then feel overwhelmed, BUT — I’m totally enjoying working on my running on my CrossFit rest days. I even fooled around and tried some Yasso 800s this morning just for giggles. I totally didn’t do 10 and for the record I have ZERO desire to run a marathon but it was good times!

This week I’m going to tell you more about my cookbook plans and I’m kind of excited to share them. We’ve been doing lots of brainstorming in our house around it, and you know how it is when you are thinking about something ALL OF THE TIME but not really talking about it? It feels weird. So we will remedy that this week as I plan to share exactly how we are approaching it. It’s going to be a ton of fun, and I’m totally planning to involve you all.

*Keep Socializing to a Minimum

Ah yes, Be Anti-Social. I was pretty good at this actually. Lots of lounging and relaxing with the pup this month and I don’t regret that one bit. 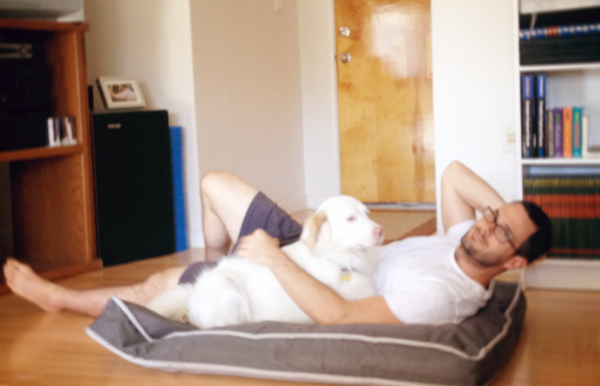 (Garrett is doing his Burt Reynolds impersonation in this picture I think.)

We have definitely still had plans, and my mom came out for a weekend but mostly all our socializing has been of the mellow variety, and it was much needed!

October was great, so let’s build on that for November!

Get my Christmas Cards In Order – This sounds so easy, but I basically fail at it every year. So I’m going to put it on the list this month, and since it’s short I expect to get to it, dang it!

Workout Like A Maniac – The holidays are a time when stress is at an all time high and my food rules tend to get…oh, how shall we say? A bit lax. So I want to make sure for my sanity and for my physical health that I am putting in the time at the box. I may not be a picture of clean living, but I will definitely commit to giving 100% to my exercise routine this month.

And that’ll just about do it. See ya at the finish line.