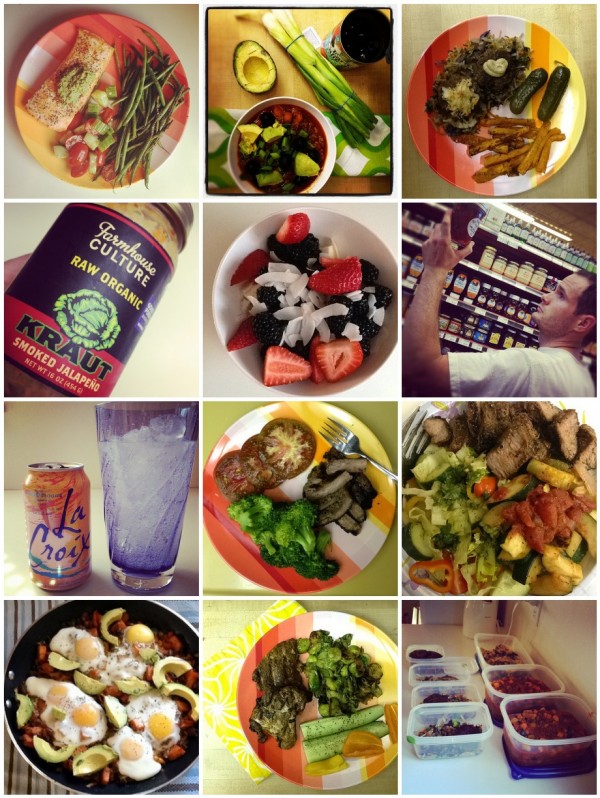 Well we’re still here and we’re still rocking this Whole 30! I can not tell you how helpful it has been to plan + prep meals. It does take a little extra work but always being able to reach into the fridge and have *something* to eat when you’re hungry really ensures that things go smoothly. Also helpful, not having ANYTHING in the house that is a temptation, because let me tell you — this would have been the week I cracked.

Along with regular life, I ended up finding out on Tuesday that I would have to go to Los Angeles for work for the day on Thursday. I’m usually pretty flexible about traveling but after Reno last week I just wanted to get into my stupid rhythm and not have to worry about eating on the go. But hey — life happens, right?

I made sure to eat a pretty big breakfast that morning before my 8am flight and when it came time to grab lunch, I wasn’t ravenous so I happily grabbed a simple salad with steak with oil/vinegar. It was not that great, no exciting culinary discovery, but I was just happy to put a little something in my tummy and then it was back on a plane by 2pm heading home.

I had also packed a little backup snack just in case there wasn’t time for lunch or I ended up in the airport and it was complicated to find something decent to eat and um…I do NOT recommend packing blueberries in a ziplock and throwing them in your travel tote. It only would have been helpful if I wanted blueberry jam for a snack. So. Next time I travel, I will be more prepared with portable snacks. But in the end, it worked out because I didn’t need it anyway.

When I got home that night I was completely NOT in the mood to cook. On a normal night I would have listened to Chipotle’s Siren Song and just grabbed takeout, so it was super clutch to have some already cooked chicken and sauteed brussels sprouts in the fridge. Add a few more raw veggies and dinner is served!

We also got back to the gym with a vengeance this week which was nice. Actually, let me be real for a second — it was not nice at all because it was 100+ degrees all week and we ended up working out at 5pm which is basically the heat of the day. By day 3 we started calling it Bikram CrossFit.

The workouts were brutal (yay! running 2 miles when it’s 102 out!) and so was the heat, but the upside was that post workout neither of us wanted to even THINK about protein shakes so we ended up just having coconut water while we assembled dinner. Because I had prepped so many meals in advance we were just able to get dinner on the table fairly quickly instead of eating a specific post-workout combo of foods and then prepping dinner separately. This week there will definitely be some morning workouts since the heat is just being stubborn and sticking around. It will be nice to see my favorite morning peeps and get a little break workout in NORMAL weather. I can’t wait!

We also had a social event this past Saturday and it was one that I was a little worried about beforehand, but honestly it ended up being no big deal. We had a fun reunion with all of our friends who we used to work with at Peet’s Coffee & Tea at the old sushi bar where we all used to have cocktails after work. Very nostalgic! In fact, random trivia, it is the sushi bar where Garrett and I decided we were going to do this relationship thing! Over gin and tonics, Yum! We both ended up eating kind of a late lunch which worked out for the best because we weren’t super hungry for sushi when we got there. But really, does sushi ever seem like a BAD idea? No, no it doesn’t.

The biggest challenge was managing well-meaning comments in a group like that. I honestly didn’t want to talk about what we were or weren’t eating, or to be told that there were good things to eat on the menu, I just wanted to see good friends, you know? But it’s fairly impossible to do that when most people are eating and drinking and you’re not, and it raised some questions, so there was some conversation about our crazy Whole 30. I hate being the person not going with flow, and it always makes me a little uncomfortable when people really want to talk about what you’re doing about food (because people inevitably feel the need to defend their own position or get down on themselves and what they’re eating, which: NOT NECESSARY) but who cares in the long run? It was fun to see friends. We have some good eggs, I tell ya. That was a great job!

There were definitely things on the menu that were fine to order, but in the end I didn’t really want any of them and decided to just opt out completely. Why go to a restaurant that serves your FAVORITE THING EVER and then order something that you don’t like quite as much? Quality of life, man. Don’t go to a BBQ restaurant and order tofu, you know? 🙂 I just didn’t feel like a substitute that night, I wasn’t that hungry and so skipped it altogether. But I did miss the gin and tonic 🙂 Club soda with lime worked just fine as a replacement though actually. It was 106 out, so it was refreshing and hydrating and really in your hand it looks and feels exactly the same. THAT, was a good substitute for me.

For Garrett, however, this was BY FAR the toughest moment he has had all 12 days though. He had a great time with our friends but on the way home he was saaaaaaaaaaaaaaaaaaaaaaaaad. Sad that he couldn’t have a beer. Sad that he had to pass up sushi. Sad because ALL HE WANTED WAS TO EAT WAS EVERYTHING AND WE CAN’T EAT ANYTHING AND…WAAAAAAAAAAAH. It was like Boy-PMS. But then we got home and I cooked him a little something delicious and all was right in the world. So you know, I think it is definitely important to not get super ravenous and then go somewhere you will want to chow down on everything and then eat nothing. It might have been good for Garrett to grab a little bite just for sustenance. Hungry=Cranky=WHY CAN’T I DRINK ALL THE BEER AND EAT CHOCOLATE COVERED EVERYTHING ALWAYS?

So. There have definitely been some cravings. Friday night wine cravings are not going away. 🙂 But knowing that we would have no ceremonious unwinding with a glass on Friday night, we decided to replace our wine ritual (since that’s really what it is we are craving) and stop at Whole Foods on the way home from the gym last Friday and get whatever overpriced organic crazy town fruit we could find and ceremoniously enjoy THAT as a treat after dinner. It was no glass of wine but it worked! I opted for super ripe apricots and Garrett went with Pluots. Both were AMAZING. The best part of completely avoiding sugar and really not eating much fruit is that when you do have it, it tastes like candy.

We tortured ourselves a little bit on Saturday at Costco during our weekly shop by going down a lot of crap food aisles. Both of us were just dying over stupid things we never buy like Peanut Butter Cups or Chocolate Covered Caramels. It was kind of humorous, but it also made me realize that we are totally out of the physical craving stage.

Now all of my cravings come from my inner-6 year old who thinks that when someone tells me I can’t have something, I want like ten of THOSE EXACT THINGS IMMEDIATELY! But it’s kind of refreshing to realize that because it’s a lot easier to distract my inner-6 year old than it is to deal with actual physical sugar cravings. We just laughed about our cartoon-eyed junk food desires and then bought our groceries. Ok and then maybe went home and finished off the apricots and pluots. 🙂

So the second week is down and I’m feeling good. No doubts we’ll make it through the 30 days at this point since we’ve had a number of challenges already and been just fine, but I am still counting the days until wine.

This coming week I’m actually doing some experiment and eliminating eggs. The fact that we are 12 days into squeaky clean eating (completely dairy free) and my face is breaking out more than ever and I’m still having some weird allergy symptoms, mostly after breakfast, which is basically always eggs, has made me want to try that to see if it makes a difference. I’ll let ya know next week!

How are you all doing?