The garden this year has been…well, nothing to write home about. This is my 3rd year actively gardening and I can honestly say I have no idea what I am doing any more now than I did three years ago. That said, I have experienced three completely different summer yields, so I will just count that as experience and tell myself that true green thumbs don’t have all the answers, they have just seen many things in their years. Um…sure that sounds good.

It’s not like we went about it willy nilly this year. We had a plan: We knew what we wanted to grow and we stuck to it religiously. We decided early on that we were going to grow our tomatoes from seed this year instead of depending on Elizabeth to sprinkle her tomato fairy dust over our yard like she did last year. It seemed feasible, so we bought some seeds and planted them: Somewhere along the line, they just…didn’t make it. They died a pretty spectacular death actually, ALL SEVENTY TWO OF THEM, despite many attempts at resuscitation. Elizabeth had been nice enough to offer us some seedlings again, but it was during one of the more promising phases of resuscitation so I declined. When it was clear that none of them were going to make it, I made a panicked run down to the hardware store and just bought up some random tomatoes. I had been looking forward to some fun heirloom varieties again, but Home Depot Romas were going to have to do.

And for a while this was fine. Things seemed to be alive. Nothing was OBVIOUSLY dying, but I just didn’t have a great feeling about the whole thing, despite doing a lot of soil testing and fertilizing and general tending. Finally at the end of June some things started to pop up, and I felt a glimmer of hope.

But then the squash started growing and being tough and bumpy on the outside and dry on the inside. It didn’t matter if we picked it early or late, it was gross and kind of inedible. Then the cucumber plants just died. Like, with no production at all really. Womp Womp.

The zucchini went through a phase where it was super prolific, but after producing about 24 squash it’s just sort of gone kaput.

And then, nothing happened. Sure there were green tomatoes lurking in cages but literally for weeks, there was NOTHING. One little yellow watermelon out of the blue that was amazing, but then back to NOTHING. At the end of July the overall yield beyond what I’ve listed had been two tomatoes. They were delicious tomatoes, but still only two measly tomatoes: And the irony of all ironies is that they came from a resurrected tomato plant that survived from last year because it was one of Elizabeth’s Original Seedlings from 2011. I mean FOR REAL?

I was starting to feel like the entire garden situation had been a waste this year. And then today, I just thought I saw a little bit of red out there in the garden beds and I came back inside with all this: 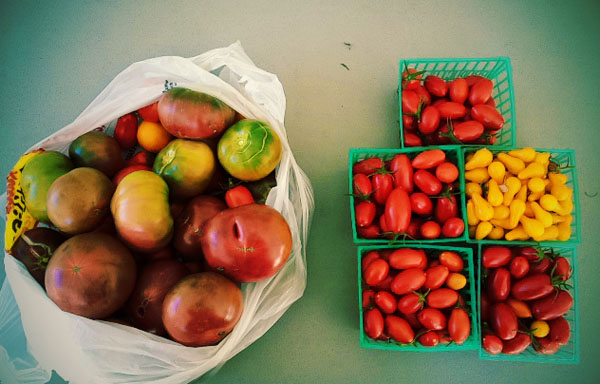 Despite the fact that we will be eating tomatoes until our mouths are raw this week (gladly, though!) my faith in gardening has been completely restored. This may be the only good thing to come out of the last week over 100+ degree temperatures.

I forgive you now, Mother Nature. But you are on notice.