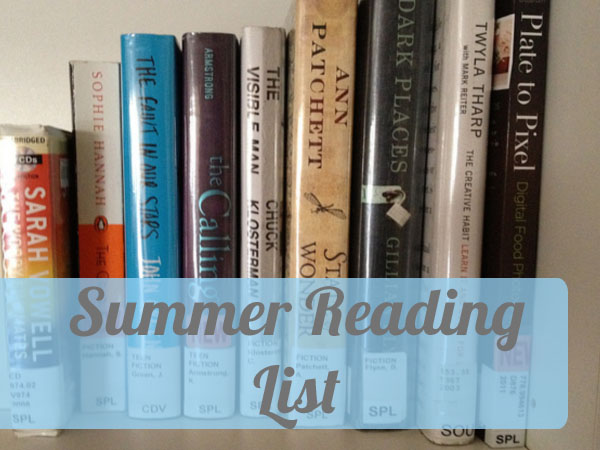 I mentioned on the Bucket List that I wanted to read 15 books this summer. A lot of them are already sitting on my book shelf just waiting to be picked up and every time I walk by I feel a little twinge of excitement.

It’s an ambitious goal for me because we have a lot on our plates this season but these are the 15 books I’m hoping to get through:

1. 50 Shades of Grey – Listen, I just need to see what all the fuss is about. I’m not committing to the series or the genre, but since it’s already so much a part of the seasonal pop culture zeitgeist, it’d be a shame to pass it up!

2. Unbroken by Laura Hillenbrand – This is our book club selection for the month and I honestly can’t wait to finally read it since I’ve heard it is such an emotional book. Garrett and I are reading it together and hosting the discussion. Two of my favorite things!

3. Dark Places by Gillian Flynn – I read Gillian Flynn’s first book last summer and it was a real page turner. This is her second book and I hear it is even better! Not to mention she already has a third out and I *really* want to read that, but I’m sort of OCD in that I like to read authors’ books in order when I can. Lame.

4. Faithful Place by Tana French – I’m going to try and not let so much time pass by between my Tana French experiences this time around. Plus she has an awesome looking book coming out this summer too, and obviously I have to read the books in order! 🙂

5. Most Talkative: Stories From the Front Lines of Pop Culture by Andy Cohen – You know I’ll buy anything Bravo sells, so I clearly need to know everything there is to know about Andy Cohen! Plus, it’s been a while since I’ve read a celebrity autobiography so you didn’t have to.

6. State of Wonder by Ann Patchett – I just really think this has an engaging sounding plot summary — Amazon jungles! Mysteries! Death! Adventure! I mean that has the makings for a pretty good summer book, right? Besides, everyone I know who read it loved it. Sold!

7. The Lifeboat by Charlotte Rogan – This was a total impulse buy that I made for the kindle the day after I downloaded the kindle app for my phone. It sounds suuuuuuuuuuper good!

8. The Visible Man by Chuck Klosterman – So Chuck Klosterman has long been a favorite of mine, and as an author he falls into the category of “I’d Read Anything He Writes.” He writes hilarious non-fiction that I can’t get enough of, and this is his first foray into fiction. It’s totally going on the list!

9. The Fault in Our Stars by John Green – I like John Green just fine. I’m not his most hyperventilating super fan, but he writes good Young Adult books. Everyone seems to be raving about this little gem, so I’m willing to see what it’s got.

10. The Cradle In The Grave by Sophie Hannah – A long time ago Amazon sent me a creepy email that told me if I liked Tana French I would like Sophie Hannah. I trusted them. They were right. Damn computer-bots! Since then I’ve read everything she’s ever written. Except this. I’m going to remedy that.

11. Gone Girl by Gillian Flynn – I only get to read the NEW Gillian Flynn if I read the OLD Gillian Flynn. But OOOOOOMMMMGGGGG, how can you not read what this is about and not want to know “What’s in the box???” (That was my best Brad Pitt impersonation, btw.)

12. The Creative Habit by Twyla Tharp and Mark Reiter – I first read about this on Elise’s blog. Sounded intriguing, so I reserved it at the library. That’s Standard Operating Procedure around here.

13. Broken Harbor by Tana French – No NEW Tana without reading OLD Tana. Man, I’m quite the book Nazi, aren’t I? Lucky for me this doesn’t even come out until July 24th, so I am buying myself a little bit of time to catch up. Whew!

14. The Calling by Kelley Armstrong – So, I read the first book in this trilogy last year but I just looked back at all of my book reviews and I never included it! How Rude! Well let me quickly recap: Young adult. Trilogy. Werewolves. Weird Happenings. You know, the usual. Anyway, the first one is a friggin cliff hanger and then the second one didn’t come out for like a year. Man! Hate that. Anyway, this is the second. I don’t really expect great things, but I just need to know how the story ends, of course.

15. Wild: From Lost to Found on the Pacific Crest Trail by Cheryl Strayed – I got totally suckered in to wanting to read this book by Goodreads. Every time I would get on to update my reading list there would be a banner ad for this book or a link to the book trailer. Finally one day I watched it and I was sold. I love a good memoir, and especially one about recovering from grief…HELLO, you know me and this particular brand of torture. I’m all over it. Even in the summer.

Have you read any of these? Are any of them on your Summer Reading List?