Book Review: You Have No Idea

Disclosure: This year I have decided to participate in Blog Her Book Club as it combines two of my favorite things: reading books and getting paid. I get to choose the books I want to read and I get to say exactly what I want to say about them. So while I am compensated for my participation, all opinions are my own. You can read other reviews and participate in discussions about this book over at Blog Her if you are interested. 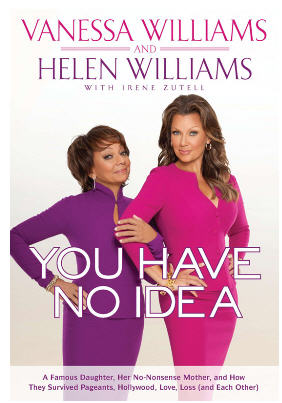 Can you imagine how excited I was when the new Blog Her Book Club book was a celebrity memoir. HELLO! This is right up my alley and you can bet I clicked my little heart out trying to be a part of this campaign!

The thing about this book though, is it’s not particularly well written. What bugged me most is that the format is sort of arbitrary. Vanessa tells a story. Then at the end her mother gives some commentary. Over and over. And they usually relate, but it was sort of repetitive and to me, it didn’t really do anything to help propel the book forward.

There were parts that I enjoyed though, and stories I found fascinating. She was the first black Miss America. She had Secret Service style security when traveling though the South. She had her crown stripped six weeks before her reign was over due to a nude photo scandal (six weeks!) She was married to Rick Fox (yum!) I mean, her life certainly had some noteworthy ups and downs.

Reading this book actually me like Vanessa Williams where previously I had felt somewhat indifferent, so I guess in that way it was a success. But also, it wasn’t particularly juicy — and if I’m being honest, that’s what I want in a celebrity memoir: a little bit of tell all, a little bit of behind the scenes, tied up with a story that has glimpses of fairy tale. Or a tale of rehab. You know, either/or. 🙂 This had shades of those things, but they were never really developed.

The updside though — it only took about 3 hours to read. Quick and dirty. Maybe a plane ride kind of book. Or something to pick up at the library? Pretty engaging overall, but in the end, nothing to write home about. More discussion happening over at Blog Her.

Next week I’ll tell you about the rest of my reading for the month of April. Man, it’s a bit of a saga.