Remember how last month I was all: “Wah, I only read 4 books. So sad!”

Yeah, so this month I only read two!

It’s looking like I will probably amend my annual reading goal at some point. (I’m not quite ready to concede just yet, but entertaining the idea.)

They were both AWESOME books! But very different. Wanna hear about it? Here we go… 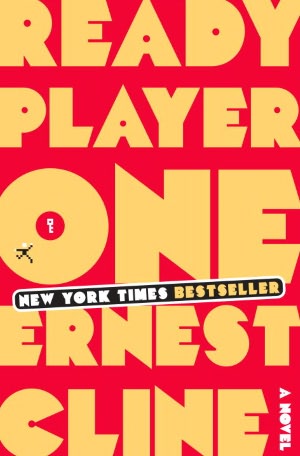 Ready Player One by Ernest Cline
This book was recommended to me a number of times before I actually picked it up. It was on my radar all last year but I could never get SUPER EXCITED about it because the premise had a lot to do with video games and I feel relatively MEH about video games. Then Garrett read it and said, “I don’t know, it might be a little too Dungeons & Dragons for you.” Of course, I heard that as a challenge and obviously I accepted. It immediately became the book at the top of my list to read.

I know. I am stubborn about stupid things.

The thing about this book though, is that it is no more about video games than the movie Goonies is about pirates. Sure the entire premise of Goonies centers around pirate lore, but can you even imagine what a giant hole would exist in your pop culture psyche if you decided to forgo watching it because Pirates: I’m Just Not That Into You. It would be a travesty!

Well this is how I feel about Ready Player One. The whole premise is about secret puzzles inside a virtual reality of the future. If you know me at all, you know that is least scintillating sentence I have probably ever written. I am almost snoring re-reading that description.

It’s full of 80s pop culture references, adventure and intrigue. And if nothing else, it was totally page turning and I was really engrossed the entire time. I wanted to be reading ALL. MONTH. LONG. Definitely worth picking up. And if you were one of the smart people who recommended it to me here, thanks! Keep the recos coming!

Then making a complete right turn, I read

Candy Girl: A Year in the Life of an Unlikely Stripper by Diablo Cody

And for the record, yes I did sing this song every time I picked the book up.

I bought this book years ago when Juno came out (before I had even watched it, actually) and everyone was wondering who the heck this Diablo Cody chick was. I have a soft spot for screenwriters who come out of nowhere and all of a sudden become super famous. She had a blog, and at the time I had started a blog…so you know..kinship and all that.

Anyway, I thought Juno was alright (maybe a little overwritten) but was always more interested in her memoir about her time stripping. What? You don’t think a good stripper memoir sounds like a page turner? I don’t know, maybe I’m weird. But I love a good inside look at a subculture or slice of life that I have no chance of EVER being a part of, so yes — stripper memoirs? Fall right into that category. And onto the bookshelf it went.

Incidentally, this book is a part of The Bookshelf Project and I’m happily crossing it off the list. SCORE! I’ve got a long way to go, but I’m working on it. And even though I only read two books this month, 50% were from my bookshelf. (HA!)

It was a super quick read and I thought it was actually pretty hilarious. It was a bit overwritten in some parts (the word somnambulatory showed up so many times I ran out of fingers to count on) but overall it was laugh out lout funny. Especially the part where she mentioned a deaf customer who held up a sign that said “Take Off Your Panty” I mean COME ON! That is hysterical. But also — it was graphic and a little bit gross in parts, so you know — not for every audience. That’s my disclaimer. But if you can handle a little vulgarity, you will laugh your pants right off. Uh…no pun intended.

So what did you read that knocked your socks off this month?