Since we talk about books so much around our house, I mentioned briefly last year that I wanted Garrett to occasionally pop in and do some book reviews. We read a lot of books together, he gleans a lot of recommendations from all of your monthly suggestions too, and I thought it would be fun to have him share some of his interesting and/or hilarious insights. (Full disclosure: Garrett has a very dry sense of humor.) After much prodding, and promises of sweet potato hash from now until eternity: he agreed. So today he wanted to take a minute to introduce himself, and after six years of blogging all by my lonesome, I’ve actually agreed to let him take the reins.

I’m fairly certain that few men my age residing within our little suburb were tapping their toes with as much as anticipation as I was about the grand re-opening of the Carmichael Library in 2006. I wasn’t there for the ribbon cutting ceremony (or the presumed Martinelli’s toast) but given the frequency Holly and I now find ourselves perusing the aisles, we clearly missed an opportunity to hang with our peeps. 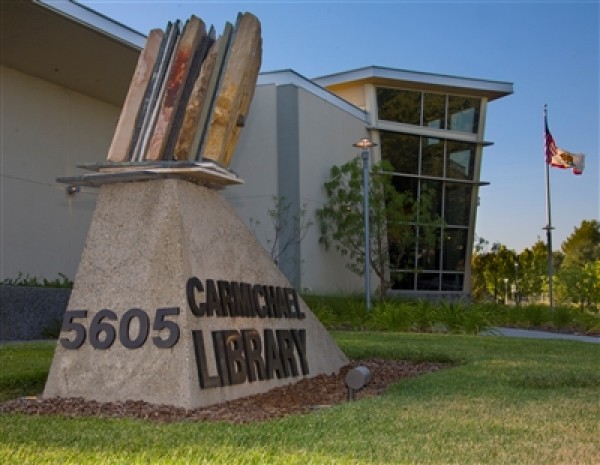 When I discovered Holly was an English major and therefore “well-read”, I was eager to show off the amenities of my local branch as part of my very Strategic Plan To Woo. Also of course, I thought it’d be nice to show her “our tax dollars at work,” seeing as I was an economics major after all. (That was not an official part of Operation: Woo but obviously a nice bonus. And she totally went for it!) Since those early days at the library it has become a longstanding fixture of our relationship. I still hold a boastful sort of pride for the place and its treasure trove of materials. For example this book that I brought home for Holly the other day: And people say romance is dead!

There’s no doubt in my mind that literature brought the two of us closer together. My devout love for the library is kind of perverse, but not in that way. Man you people on the internet have some dirty minds, don’t you? I knew it! In all seriousness though, I love our library because it has THE BEST selection of audio books, and the dirty truth is that I would rather listen to audio books than actually reading them. (Crap, was that the record skipping?) I feel like you should know the back-story of this since we are all getting to know each other. If I’m going to be telling you about what I “read” in the future, you should probably know I’m really telling you about what I listened to. But let me just say, it comes in SUPER HANDY when all the characters have Scandinavian names.

Like most children of doting parents, once I was buttoned into my pjs and snuggled into my dinosaur themed twin size bed, I was read to until I fell asleep — the explanation being that one day I’d be able to read to myself and a limitless world of books would become available. In their practiced voices I’d be whisked away to land of Goodnight Moon or off on an adventure with Curious George or Harold and the Purple Crayon (Still favorites!) Obviously most of the books were chosen because they contained a lesson or moral my parents wished to expose me to, and god knows where I’d be without the self-actualization of The Little Engine that Could and the blinding wisdom of Aesop’s Fables? Probably slumming in the gutter somewhere. Bullet: Dodged!

One Christmas I received a radio/cassette deck from Santa (Sweet! He must have read my list for a change.) And shortly thereafter my parents began to mix in illustrated story books replete with full narration on cassette. Only as an adult did I come to understand the cassettes were an ingenious way for my parents got a free pass on reading for the night. Little did they know, that was when my love for audio books was born, and also I was learning an invaluable trick that we will no doubt perform on our children. But probably with CDs, since Holls and I are both like 10 years behind on procuring new technology.

When I was seven my Mom took a job that added three hours of a commute. (Gold star to my Mama for being dedicated!) To help pass the time she would listen to books on tape while driving. Do any of you youngsters remember tapes? THEY WERE BAD ASS! Audio books also became companions on the road trips of my youth. Generally since my mom was doing the picking, the material was your typical For Women, By Women fare (it’s pronounced FWah-BWah around here, and I like to say in a very obnoxious voice. Holly loves it, I assure you.) (If you take away nothing else from this post, let it be that awesome term. LET’S MAKE IT MAINSTREAM!) Anyway, once again, the intrinsic convenience of narration won out over jostling about in the back seat attempting to read.

Unlike my mom, (or Holls for that matter) light hearted mysteries or sentimental books about people’s feelings were never reallymy genres of choice (not enough guns and aliens.) But if we’re being honest (and I’d like to think people do that on the internet, right?) something must remain, because years later I sometimes find myself perusing the library’s audio racks considering what kind of sordid affair Sue Grafton’s detective Kinsey Millhone has invariably bumbled into. Despite discounting vacations spent in the car listening to “chick lit” as nothing beyond awkward adolescent memories, a part of me clearly enjoyed absorbing the sentimentality those novels contained. Don’t pull my man card, I sometimes listen to books like this ONLY for nostalgic purposes and I always do it while wielding my chainsaw or some other sort of very manly implement.

After we finally moved to be closer to my mom’s job, I vividly recall perusing the covers of her novels in our new house that were aligned systematically by author. This is especially noteworthy because I have a constant battle with Holly over whether we should arrange the bookcase by author or color. Color makes no sense to me, which I realize means I know little of home décor. But I do know that a happy (almost) wife makes for a happy life so I will let you guess how our bookshelves are arranged. Anyway, at a glance my dad’s books were far more appealing to a teenaged boy about – often times complete with illustrations of planets populated by alien creatures jostling for dominance against spacesuit-clad soldiers with laser guns. But they were usually quite dense and I always had difficulty paying attention to the material. I told myself it was simply a matter of time before I was older (read: smarter) and then these books would prove a breeze to read, but even now if I can get it on audio, it’s always my first choice.

In high school when I was required to read just about every day (and always outside of class…MAN! What was that all about?) I altogether lost the taste for reading for fun. Hopefully some of you feel me on this? I shelved (RIM SHOT!) the idea of reading dad’s science-fiction tomes or espionage thrillers even though I had patiently waited for years to be ready to tackle them. Major drag, dudes. Actually, it’s only been in the last few years that I can sit and read a book without trepidation. Ok maybe I’m being a tad melodramatic, but in all seriousness the only thing that brought me back to actual reading, of actual books was to get the girl. Highly motivating!

The cool thing is Holly supports my love of audio books. I suspect it’s partly because they afford me the opportunity to multitask in ways conventional reading cannot — meaning I can do a lot of laundry and dishes while I am “reading.” I can’t blame her really. I used to be secretive about my “reading” preference, but at this point why not just get it all out there for the entire internet to see. I guess there are worse things that could be out there about me, right? Last year I listened to quite a few books, and shockingly I even read a couple. Holly told me to keep a journal or to get on Goodreads but I declined because I was (lazy and) also kind of skeeved about putting my reading tastes out on the internet. I don’t even have Facebook, you guys. I’m trying to stay off the CIA’s list and surely my love for bad ass spy thrillers would be raising the red flags!

But in 2012 I resolved to keep a list and Holls talked me into periodically guest posting with reviews or other adjunct material. I think this is her way of trying to get me to baby-step into social media (NOT GONNA HAPPEN) but she says it is because she has always appreciated my insight. We’ll see how it goes. Throughout the year we plan to read a few of the same books and provide a post of our reactions, no matter how disparate they may be. It’s my sincerest hope that you enjoy reading these upcoming posts as much as Holly loves coercing me into writing them. She’s a very good at arm twisting, but if you know her, you probably already know that. So thanks for making it through my first guest post.

Any books you think I need to run out and pick up? I know you guys have some great suggestions (Ready Player One RULED! Thanks for that one.)