This is a series of autobiographical vignettes inspired by Dear Wendy’s series of the same name. The idea is loosely based on Amy Krouse Rosenthal’s Encyclopedia of an Ordinary Life.

All of my stories can be found here.
*** 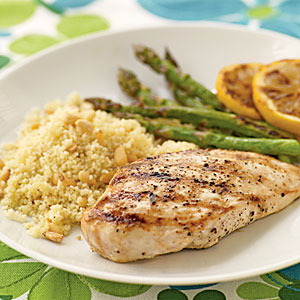 The chicken breasts were seasoned with a dry rub he had mixed himself and then grilled on a miniature Coleman in his backyard. It was summer and the windows were open and the house filled with the kind of pleasant smokiness that you can only really get with charcoal. The Coleman was small, black and spherical and when it came time to flip the chicken from side to side Garrett had to crouch down more than was probably comfortable. The grill had been a gift from his father, given to him when he first moved out on his own — one of many totems of manhood passed down from father to son. While it was the first of many meals we would grill in that yard that summer, it was one of the last we would make using that particular apparatus. I would eventually purchase a larger Propane Grill for Garrett’s first birthday we would celebrate as a couple.

While the chicken was cooking he came back inside and forked cous cous on the stove top like it was his own personal zen garden. Over glasses of wine I admitted that at 25 I had never eaten anything like that, let alone prepared it, so I watched with the excitement of a child learning to do something new for the first time. Though I was a well-established cook at the time I remember feeling so impressed and full of anticipation because of this simple dish. What else would he teach me that I had no idea I didn’t even know yet?

Surprisingly one of the biggest lessons he taught me involved a standard bag of pre-chopped crudite. He took the bag out of the mostly empty refrigerator and poured into a flowered Pyrex casserole dish that his mother used to use in their kitchen growing up. He steamed them in the microwave in a shallow bath of water and topped them with a hefty pat of butter that melted amidst the steam, just like my heart. While we had eaten lots of vegetables growing up in my house, I don’t ever remember feeling quite as excited about them as I did in that moment.

Months later I would meet his parents for the first time over dinner in this same kitchen. I’d watch his mother grab the same bag of vegetables from the refrigerator — though this time instead of being empty it was overflowing with the kind of bounty that only parents can bring when they visit their children in college — and then prepare them identically to the way Garrett had that first night. As she brought them to the table smiling, in this kitchen that had already opened my heart in ways I’d never anticipated, I realized — simple as they were, those vegetables were an act of love. And as she passed me the serving spoon, I smiled right back.

3 Comments
POSTED IN: Alphabet: A History

3 Responses to Alphabet: A History (C) – Cous Cous and Crudite