Stories I Only Tell My Friends by Rob Lowe (Part One) 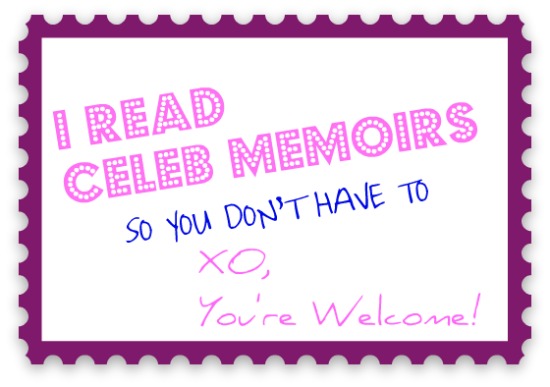 Oh you guys, this was a doozie. And by this, I mean Rob Lowe’s Stories I Only Tell My Friends: An Autobiography. Maybe you love Rob Lowe from the 80s or maybe you were a little too young to lust after various members of The Brat Pack (I was just a smidge too young, though I was obsessed with ALL the movies in my teens.)

Regardless, the book was a totally soapy, interesting and actually well written book. I kind of love Rob Lowe more after reading it, even though I realize editorially, all of these stories are completely one-sided. Anyway, if you don’t want to run out and buy it, let me tell about the good parts. Settle in, this is a long one, which is why I’m breaking it up into parts.

He tells a story at the beginning of the book about JFK Jr (speaking of swoon!) which I actually thought was kind of brilliant, since he ends the book by going back to it. It sort of parallels some things about Rob’s life (yes, I’m totally going to call him Rob, since I am totally his BFF now that I’ve read the book.) While being this “hunky celeb” he is also very politically minded, and at the end of the book when he talks about his most recent TV role (The West Wing), the whole thing sort of comes full circle. It’s not as douchey as I’m making it sound, promise.

So he describes how they meet in his younger years, then see each other socially again and again and finally one night they have a chat in a Park City, Utah bar during Sundance about they key to happiness in life. Rob says, now that he is sober, that his wife is the key to his happiness, and supposedly it is weeks later he proposes to Carolyn Bessette. Whether this is true or not, or just Rob Lowe puffing his feathers and giving himself credit, who knows. But it sets up the book for lots of discussion about public perception, politics, love and marriage, and happiness.

He starts chronologically with his life growing up. Raised early on in Ohio, his parents divorce and his mom moves the family out to Malibu, CA. He befriends some folks in town which include brothers Charlie Sheen + Emilio Estevez and Chris + Sean Penn. Nice random friends to meet when you move into a new neighborhood, right? Obviously they all have an interest in film and they fool around making silly small movies.

Because he is interested in movies and has already shown a passion for acting (he was involved in lots of theater in Ohio and continues to look for an outlet in Malibu) his new step father takes him to a movie set where his brother and sister in law are doing special effects. He is pretty impressed with the AMAZING special effects work that is going on, and it just so happens to be for this little movie called Star Wars.

He of course has to throw in the story of how he lost his virginity to his brother’s 16 year old babysitter. All that really made me thing was: Oh yeah, Chad Lowe is Rob Lowe’s brother. And then I thought about Life Goes On and wondered whatever happened to most of the cast. It was a long rabbit hole of google for me. After boning the babysitter he also starts drinking a lot with his buddies, and does a bunch of commercials that sort of satisfy the acting bug. He begins to get more serious though, landing a local agent and one night they go to dinner with another actress trying to make it in showiz who is beautiful and passionate and wide eyed. Rob could care less though, because he brought his girlfriend to dinner (to his agent’s dismay) so it appears he missed out on a nice blind (chaperoned) date with Sarah Jessica Parker. They keep in touch though, over the years.

He finally gets a TV Series and it completely changes his life. Well, in the way that it completely changes your life when you start getting fan letters from men in prison. Also, he’s making some money. But that little voice inside keeps telling him that if all these girls screaming for him at local appearances really knew him, they wouldn’t like him. Booze helps. He ends up working with a number of other actors who get fed up with acting and move on to other pursuits. One of which was Janet Jackson. I guess she ended up lucking out, eh…especially since the show was eventually canceled.

Luckily he gets some roles in After School Specials. God, what happened to those because they were THE BOMB. This one is called “School Boy Father,” ahem, and he goes to his girlfriend Jennifer Grant’s house to watch it (Remember her from 90210?). They sit on her dad’s bed to watch it (awkward?) and daddy-o joins them halfway through to check it out. Daddy-o tells Rob he’s a good actor, which seeing as her dad was Cary Grant, Rob is excited. Apparently Cary Grant gives him some Faberge eggs and Brut Soap on a Rope. I feel like this is some kind of nod to the fact that Cary Grant was gay, but I’m not really connecting the dots. Help me out.

After Jennifer Grant, he then begins dating Melissa Gilbert (who I just read today is getting divorced…sad face) and this, to me, is where it gets interesting. I heard that she devotes a LARGE part of her memoir to their relationship because it was so dysfunctional in her life, but you’d never get that from how Rob talks about it. Basically he dated her when he was filming The Outsiders, which was a big time of change in his life. Concurrently, his friend Sean Penn is working on a little movie called Fast Times at Ridgemont High. Things are beginning to change for everyone.

It’s around Christmas of 1982 — I was begging for Cabbage Patch kid from Santa but Rob was heading up to Zoetrope Studios to audition for Francis Ford Copolla’s adaptation of S.E. Hinton’s book The Outsiders. The ensemble cast that would ultimately include tons of brand new up and coming actors.

So Rob is scared of the audition process because he has heard that when his friends’ dad Martin Sheen made Apocolypse Now with Coppola, the intensity on the set almost killed him. But he ends up nailing the audition and reports to the set in Tulsa, Oklahoma to make this movie with all of his soon to be friends and costars. The cast rundown shakes out as follows:
Matt Dillon is lady killer (Rob is inspired)
Patrick Swayze is a master of everything he touches, and a bit older and more mature (and married)
Tom Cruise is one of his BFFs (and VERY intense)
C. Thomas Howell (what ever happened to that guy?) is total professional
Emilio Estevez is a comfort to have around because they are friends from home
Diane Lane is a babe (and probably dating Matt Dillon)
He makes very little mention of Ralph Macchio — no love for The Karate Kid? What???

As you can imagine, the set is full of shenanigans, but he learns a lot as an actor. He also learns how to drink heavily and still show up for work.
***Foreshadowing***
He leaves the set and feels really proud of his work, but when it finally shows up in the theater, his part is dramatically reduced and it’s his first professional sucker punch. His friend Tom Cruise is taking a chance on a little film called Risky Business, Matt and Diane get cast in Coppola’s next film Rumble Fish and Rob gets the opportunity to audition for Dino DeLaurentiis who is about to start production on Dune. Ultimately he turns down Dune (it is supposed to be a trilogy, he would ended up turning into a sandworm in the last movie, and would have no script approval) and it is a bullet dodged, as they do not go on to making the other movies.

The Making of a Movie Star

He chooses to work next on a movie called Class, which no one really sees, but ends up getting to work with a talented “up and comer” named John Cusack, and it’s his first movie with Andrew McCarthy. Hmm…I smell the 80s! While making the movie, it is the first time he is away from his family on Thanksgiving. He has dinner with the director and some friends of the director’s family who host a lovely evening where Rob chats up their daughter. The daughter is little out there, they stay up all night talking, and she gleefully announces that she is a virgin and saving herself for Jackson Browne. The daughter also, apparently, is Daryl Hannah. I wonder how she feels about that little story? Don’t worry though, Rob gets his just desserts when his next movie bombs at the box office, beaten out by a little movie called Splash.

That next movie he does is called The Hotel New Hampshire, and it is the first role that he is just offered: no audition necessary. He jumps at the opportunity and co-stars with Jodie Foster (who he has great respect for) and Nastassja Kinski (who he thinks is hot.) As you can imagine, he ends up boning Nastassja Kinski, but it is Jodie Foster, years later, who will be his only friend who reaches out to him during his Sex-Tape Scandal. I totally put this movie in my netflix queue after reading this book. I don’t know why, it just sounds a little twisted and weird.

Things are just starting to heat up, but I promise, it gets better. Back soon for the second installment!

4 Comments
POSTED IN: I Read Celebrity Memoirs So You Don't Have To, memoir, rob lowe