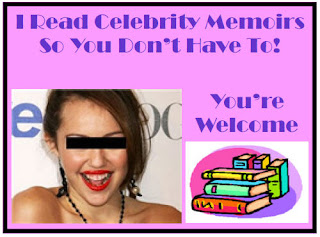 So before we talk Celeb Memoirs, we need to talk context.  Are you guys watching The Fabulous Beekman Boys on Planet Green?  I will pretend that I have slyly crafted this post about a Planet Green show to coincide with Earth Day, even though you can probably see through that bologna from a mile away.  Anyway — it is hilarious!  And if you’ve never heard of it, here’s a little introduction so you can get the feel:

I’m shamelessly addicted to this show because I have this secret fantasy that someday we will move out to Garrett’s parents’ property (where they already have adorable goats!) and turn it into an awesome family business! Our happily homeschooled children will run around naked in teh fields and we will make our own artisinal cheese!  But then Garrett reminds me that we aren’t giant hippies and we don’t know anything about farming (YET).  But you know, a girl can dream, right?  Plus, goats are so much more loveable than you would think. Needless to say, every week when we tune into this show about 2 city boys who move out to the country to make it as Farmers and build a brand, it tickles the part of my brain that stores that fantasy.  When I heard that Josh Kilmer-Purcell (1/2 of the Beekman Boys’ fabulousness) wrote a memoir about how their farm fantasy/reality show came to be, called The Bucolic Plague:  How Two Manhattanites Became Gentleman Farmers,  you know I was on that like flies on…well, you know what flies like.

Anyway, I know I promised that “I Read Celebrity Memoirs So You Don’t Have To” but it’s such a hilarious story that for the record, you should definitely read it.  I don’t imagine I will say that about all the celeb memoirs that I read, so you can certainly count on a few more details in the future, but on this one I don’t want to give it all away.  But I’ll at least tell you the gist of the book:

Josh (a writer/ex drag queen/ad-exec from Manhattan) and Brent (an MBA/Doctor/Overacheiver formerly in the employ of the Martha Stewart Empire) fall in love with a 200+ year old mansion during an autumnal apple picking jaunt out to upstate New York.  The book chronicles the tale of that purchase as well as their foray into entrepreneurship with their company Beekman 1802, which sells goat milk products as well as foodstuffs created on their farm.  Doesn’t this fantasy sound familiar?  I thought so.  Now you know why I love this book (and the show!)

It is one part love story, one part business development case study, and one part modern day Beverly Hillbillies Fable in reverse that is overflowing with gardening stories, wry humor about all things farm life, and of course some well placed behind the scenes stories and jabs at the expense of Martha Stewart — and really?  That’s a pretty winning combo in my book.

Their path is not an easy one, and although they do find themselves in the fortunate position of being able to buy a second home and live out this fantasy, it is not without cost.  Things become more complicated when the economy takes a nosedive and their relationship starts cracking under the stress of entrepreneurship.  They creep right up to the edge of Losing It All.  There are a lot of hysterical antecdotes, colorful characters, and creative inspiration, and I was truly sad to see the book come to an end — which is such a great indicator that you’re reading a good one.  Luckily I still get to tune in weekly to their adventures, and if you haven’t checked out the show yet — DVR it and tell me what you think.

There’s a little something in it for everyone, just like in the memoir.

1 Comment
POSTED IN: I Read Celebrity Memoirs So You Don't Have To, Josh Kilmer-Purcell, The Fabulous Beekman Boys