Style Question: Why do Old Navy Pants Suck So Hard?

Oh, so when I said I might start posting pictures of What I Wore did you think it would be fabulous and stylish fashion-y pictures?  BAHAHAHAHA…yeah, I am a woman of substance, not so much with the style.

Today’s Style Question – Part One:  Why do Old Navy’s pants stretch out so that you can fit an adult diaper in there only 4 hours after wearing them?  And Part Two:  Why do I continue to buy them?

The quick answer to Part Two — these pants were $11.99 on clearance and they were vanity sized to high heaven! 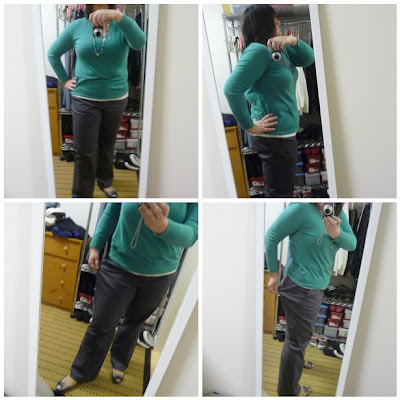 The top photos?  From 7am this morning.
The bottom photos?  Taken at noon.

That is some Dramatic Ass Pooching, if I do say so myself.  What gives, Old Navy?
I mean really?  What could these pants possibly be made out of that they stretch so amazingly without even being considered “stretch” pants.


My final questions of the stylish nature then, is:  If you can only get 2 acceptable hours of wear out of a pair of pants is the bargain and vanity sizing worth it?

Do you love Old Navy Pants?  Am I crazy?

March was another good month of books.  I’m sort of waiting for the other shoe to drop and to show up here one month and say “Well sorry guys, I didn’t read ANYTHING.”  But this month I picked up 9 books and managed to actually read 8 of them.  The book I put down?

How I Write:  Secrets of a Bestselling Author by Janet Evanovich.  OHMAHGAWD, I listened to this on audio book and it was awful.  It was read by the author and whoever let her read out loud should lose their job.  It was worse that Sheree’s acting on Real Housewives of Atlanta.  It felt like someone a Saturday Night Live skit with Mike Myers doing “Linda Richman reads a book.”  Let’s just say it did not make me all verklempt.  Plus the writing advice was akin to “Ok first get a piece of paper.  Don’t forget a writing utensil!”  UGH.  When she got a few chapters in and stated that she was going to let one of her “characters introduce themselves” I had to give this the axe.   I got two discs in and really couldn’t take it anymore.

Luckily I followed it up with something a bit more page turning or this month could have gone off the rails real quick!

What The Dead Know by Laura Lippman — Lippman is a pretty famous mystery writer and I was constantly coming across interviews and book reviews about her writing.  I’d never read her but was in the mood for a good mystery and this definitely fit the bill.  The plot in brief:  30 years after 2 sisters go missing at a Baltimore shopping mall, a woman turns up claiming to be one of the sisters.  The unravelling of this woman’s identity as well as what really happened all those years ago are woven together in a very non-linear story that was quite a page turner.  On the cover of the book was one of those fluffy quotes by another author about how Lippman doesn’t write mysteries, she writes about the hearts of people and blah blah blah, and I rolled my eyes as I usually do because those cover quotes always seem like literary circle jerks , but I will say — this story was a very eloquent portrayal of human emotion (oh god, slap that sentence on the cover of a Jodi Piccoult novel, GAG!)  but it also had an intriguing mystery in it.  And I really enjoyed that.  She is a great writer, and although the resolution of this particular story was a bit quick, at the end the pacing and depth of the novel kept me highly engaged the entire time.  I will definitely read her books again.

Stay by Allie Larkin — This book was utterly charming.  I have to say I was leery of it since it was Everyone’s Favorite Book for a minute on the internet, and we all know that I don’t have the best track record with these types of books.  The other thing making me feel uncertain was that the premise of this book was not super engaging:  Girl loves boy.  Boy marries Girl’s Best Friend.  Girl gets dog and mends the pieces of her broken heart.  Maybe I’m heartless, but this does not make we want to tear through the pages.  But I have completely changed my opinion.  Internet, YOU HAVE TOTALLY REDEEMED YOURSELF!  The sweetness of this book and the complexity of the story — it just grabbed me right from the start.  I actually took a chance and listened to it on audio book and was so enthralled I took it to work and after a day and I half I was done — sad to be saying goodbye to all of the characters.  It was a very heartwarming book and I recommend it highly if you need a little dose of feel-goodery. I need another girl finds dog and mends heart book, STAT!  Recommendations?

The Law of Similars by Chris Bohjalian — This was a random library grab off one of the end caps I passed by in a hurry.  I remember very vividly reading Bohjalian’s debut novel Midwives back in 1997 when I was in love with Oprah’s Book Club and everything it stood for and that book actually remains one of my favorites.  Well, I should probably reread it again before I go saying that, but I have fond memories of reading it and I find it hard to believe that in the last 15 years I haven’t picked up another one of his novels.  I’m glad I did with this one.  It was a love story, a mystery, an anxiety inducing lawyer-ish novel, and a story of loss all at the same time.  It tugged on the heartstrings and made me want to keep turning the pages.  I wanted a sequel.

Old Friend from Far Away:  The Practice of Writing Memoir by Natalie Goldberg –Filled with many meditative writing exercises on “How To Remember” I found some of the things I wrote while working my way through this book to be really emotional and things that I didn’t even know I had inside.  God that sounds cheesy, but it was so true.  I sort of have a new writer crush on her and want to pour through everything she has ever written.  Just walking around the house thinking about some of her prompts had my fingers just pulsing with ideas.  I immediately had to pick up another one of her books.

Writing Down the Bones:  Freeing the Writer Within by Natalie Goldberg–Goldberg says the rules for good writing and good sex are the same:  Keep your hand moving, Lose Control, and Don’t Think.  I loved this advice.  I definitely thought to myself at first “Ok this is going to be some New Mexico Hippie Business,”  and you know what, it kind of was.  But it was also some really sound advice on writing and I found it totally engaging and inspiring.  This book is 20 years old and was apparently a bit ground breaking in its approach to creativity and I just loved it!  Definitely Recommend. Highly, actually.

Mommywood by Tori Spelling
So now that I have gone and confessed that I have a thing for celebrity memoirs I feel like we can talk openly.   I loooooved sTori Telling despite the dumb word play in the title, and would recommend it to anyone who wants a kind of trashy Hollywood tell all, so needless to say I was really looking forward to finishing this book (I had started it ages ago and put it down for some reason, which should have been the first read flag.)  But this was kind of a disappointment.  Lots of justification about why being a mom in Hollywood is so hard because everyone is so aware of your body and the paparazzi follow you around but HONESTLY?  It was a bit much.  I mean she tries to be tongue in cheek about it all and she is good at poking fun at herself, but she was playing the world’s smallest violin in my opinion.  Then there was more discussion about her mother in this book but for some reason it felt really contrived this time.  Like I was acutely aware that I was only getting one side of the story.  I don’t think sympathy for Candy Spelling was what she was reaching for with this novel but that is kind of what I was left with.  Let me be totally clear, I will ABSOLUTELY be reading her next book.  I just can’t stop, people.

All We Ever Wanted Was Everything by Janelle Brown–I loved this book in the way I love a good cheeseburger.  A cheeseburger isn’t particular revolutionary, yet when you have a good one you can absolutely savor every bite.  This was kind of a chick book — I wouldn’t call it chick-lit because I tend to think of that as a little bit fluffier and more on the romance side — but it was a story of a mother and her daughters going through some drama.  When I read the back of the book to Garrett he was like, “CHICK BOOK!”  and I have to say the plot synopsis really supported that.  But since this book has been on my To-Read list since 2008 and I saw it at the library, I finally picked it up when I had nothing else to read.  Surprisingly, it was absolutely DELICIOUS.  Just a really good story and fun characters and I really loved the way it was written.  Brown has been compared to Jonathan Franzen a lot in the media and I can kind of see why, she definitely has an eye for being able to draw the marrow out of the mundane.  And I love when I read a book and catch myself trying to memorize a turn of phrase or description just because it captures something so perfectly.  This book was full of that.  I definitely will read more of Janelle Brown.  Well, spoiler alert:  I did read more, but I didn’t finish it until April, so technically I can’t tell you about it until next month!

The Reader by Bernhard Schlink
This book was…complex.  I listened to this at work, which in hindsight was not the best place for such emotional fiction.  I hadn’t seen the movie so all I really knew was that it was a story about a woman who falls in love with a younger boy.  This didn’t really strike me as a piece of work that I’d be dying to pick up, but I do love some Kate Winslet (if she wrote a memoir, you know I’d read it) and since she was lauded for her performance I figured it must be pretty good.  The book is billed as a story of sex, love, shame, reading, and postwar Germany and boy does that not make for the most lighthearted reading.  But it was very powerful and heart wrenching in parts.  I listened to it quickly and had to take a few days off to recover when I was done.