Before And After: Our Yards

Posted on December 20, 2010 by Holly
So our front and backyard?
Finally done.
Actually, it’s been done for over a month now but I just haven’t had it in me to post the Before/After pics.  I know, I suck.  Part of the reason is because since finishing, it is almost painful to look at the before pictures.  It’s not that our new yard is so super fancy that it blows our old yard out of the water — I mean, come on, our budget was spent on really fabulous things like Extreme Trenching and Improving Drainage, etc so obviously this hampered the Porno Pool w/ Grotto, you know?  I just want you to manage your expectations here.  But my hesitation to post these pictures had more to do with the fact that every time look at the Befores, it is all I can do to not shout – I SWEAR WE WERE NOT WHITE TRASH!
But before I tell you the story of the yard, I feel like I should tell you the story of this house so you understand why the yard got to the condition that it was in.  It’s not like one day we just started throwing garbage in the backyard and stacking things – it was, er…well, a much more complicated process.
So once upon a time in 1999 Garrett’s parents bought him this house when he went off to college.  They were assuming (quite intelligently, actually) that when he was done with college a few years later they could sell the house, recover their expenses, and pat themselves on the back for their smart investing. This was only possible for two reasons —  1)  Real Estate in in 1999 was incredibly cheap  and 2)  Their son was an 80 year old man living in an 18  year old’s body and could responsibly care for a house at such a young age.  As you can imagine there was no way in hell my parents would ever have purchased me a house when I went off to college, and righfully so!  The only thing they didn’t anticipate was Garrett getting comfortable here and never wanting to leave (and who can blame him – our little house is really quite cozy) and that the real estate market would take a massive nose dive.  Have you heard?  It blows.  So for now we rent from his parents, live in sin, and it works out well for all involved.
But back in 2007, after almost a decade of Garrett living there but before I moved in,  it was becoming apparent that the house needed a little updating.  It was about 900 square feet, had one bathroom, 3 tiny bedrooms, and only outdoor laundry.  Garrett and his parents hired a contractor and 6 months later basically had a brand new house.  It was still 3 bedrooms (though much roomier at 1200 square feet), but it had a second bathroom, a remodeled master suite, and an indoor laundry room.  Due to the dumpsters, tractors, contractors, and new foundations being laid though, what it DIDN’T have at the end of that 6 months were pretty yards.  The front and back yards died a horrible death and instantly got put on the the “Things To Do At Some Point When the Remodel is Done” list.  And then life went on for about 2 and a half years:  Garrett started a new job, we moved in together, we merged all sorts of aspects of our lives, Garrett quit the new job, and  it just never seemed like the right time to start a large scale yard remodel, so we didn’t.
But by August of this year Garrett had quit the soul sucking full-time job and had been working part time for a few months.  We had fallen into a new life rhythm and it finally seemed like the time.  We started interviewing landscapers, getting quotes, and finally in September we started with the front yard looking like this: 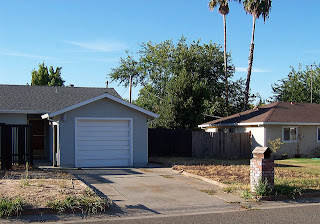 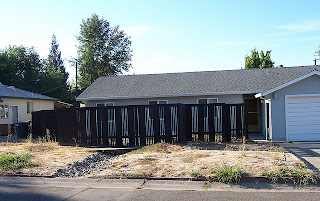 And come November, it started looking a little more like this: 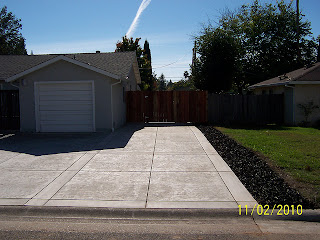 A nice new driveway that can fit 3-5 cars now instead of just one.  And some low maintenance bark/shrubs/moss rock…see? 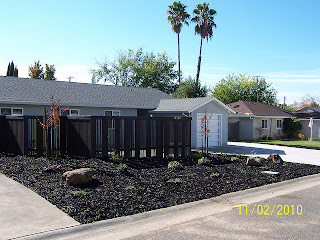 And inside that gate, a new little patio: 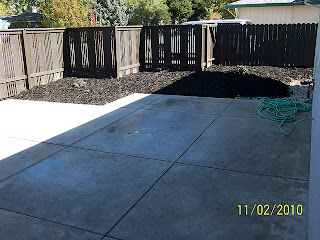 Of course now that the yard is done we have no Patio Furniture Budget, but that is neither here nor there.


Now, onto the backyard!


I just want you to remember to tell yourself that we are not white trash, mmmkay?


Here was our back patio and “lawn” before: 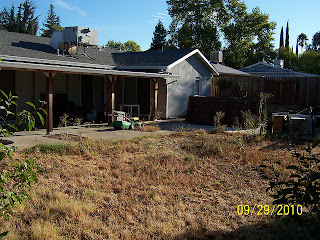 And what was left of my “Garden Beds”: 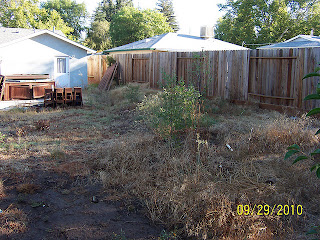 Here’s another look at what were my Garden Beds and our shed: 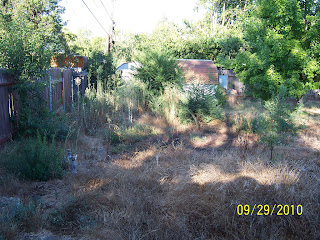 No, that is not where the Uni-bomber lives.  That’s our backyard!

And of course, here was our lovely side yard: 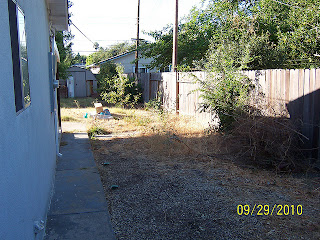 But then November came, and after about a month of many strange men being at my house at all hours of the day 5 days a week (sometimes 6!) the yard began to look a bit more liveable.

Now look at that side yard: 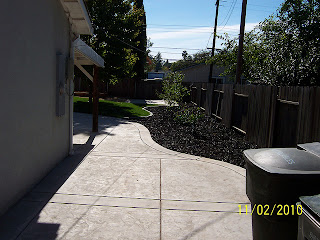 Which leads right onto our new patio: 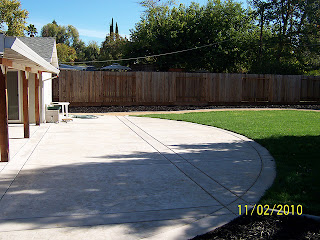 And look — we actually have a lawn now! 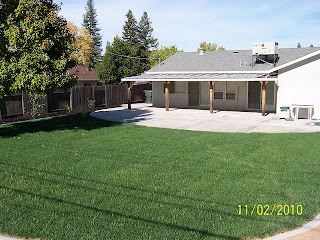 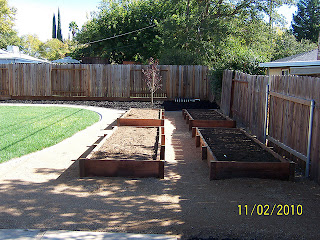 Though, uh, who is going to teach me how to garden now that I am responsible for 120 square feet of soil?  OY!  HALP!


I am trying to convince Garrett that we should have our wedding here since we could easily fit 75 people in the back to witness a little holy matrimony.  Plus — it would be free!  (Well, the venue at least.)


If you are interested in seeing more, all of the photos are here.