Friday night after a long week, Garrett and I sat down over a glass of wine and started talking about the ups and downs of our day.  When I got to the downs I told Garrett about how I was was a little bummed that we didn’t get a Christmas tree this year.  We don’t have kids, but we’re pretty festive and we had talked about getting a tree this year (since we didn’t last year) and decided to definitely do it.

First we had planned to go right after Thanksgiving —  but honestly, after running the 5K, the siren song of having 3 more days off just to relax had a greater pull than the idea of having a festive and decorated house.  So I lit a balsam scented candle and said we’d do it next weekend.  Then the following weekend had us attending 2 parties, with one very late night out so come Sunday we lit the candle again and decided we’d go next weekend.  Oops, except “next weekend” was this last weekend, and this last weekend Garrett was heading out of town.  Unless we wanted to go the weekend before Christmas and do a rush job — and I didn’t mostly because I’m morally opposed to paying $50 for a tree that is only going to be up for a week — it was looking like we weren’t going to be getting a tree, and I was bummed.

Mostly I was bummed because I am dying to replace the memory of the last time we got a Christmas tree.  I’ve told you about this, haven’t I?  How we marched down to Home Depot, picked out the prettiest tree on the lot, smugly tied it to the roof of our car, and then realized that we had tied our doors closed?  Yeah, not my sharpest moment.

Anyway, so no sooner do I express my dissatisfaction with our Christmas Tree Situation and my phone buzzes.  It’s a new text message from my cousin’s husband saying:  “Want a Free Christmas Tree?”  And for a minute I felt like I was on candid camera or something, but obviously without hesitation I said YES!!!  And 4 hours later we had a tree in our garage.  That he delivered!  Saving me from tying my doors closed or tying it to myself or something equally as unsavory!  It was a huge tree, actually and it needed a little surgery before it could come inside, if you know what I’m saying.  So  Garrett handled the actually trimming of the branches and stump, and I handled the light and ornament trimming while he was out of town.  And it’s so cute!  My mom came over, we busted out all my childhood ornaments, played cheesy Christmas music, and by Saturday night we had this: 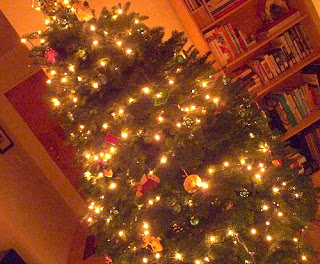 Except imagine it looking even better because I take terrible pictures!
﻿

The house smells fantastic, it is beautiful to see at night, and even though it takes up half of our tiny little living room — I LOVE IT.

I think I’m going to call it my own little Christmas Miracle.  Well, you know, unless Santa shows up at my door with the winning lotto ticket.