A Week of Big Accomplishments!

Back to reality, eh?  Man do I love a long weekend, but the Monday that follows is a little rough, no?

I hope you all enjoyed your holidays — Garrett and I spent our Thanksgiving morning running our first 5K together and man, it was chilly!  (28 degrees when we left the house!  Uh, we Californians don’t do much when it is 28 degrees out, so I was certainly second guessing my decision to run a race!) 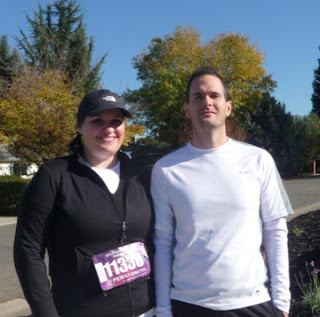 I use the term ‘together’ loosely though, because Garrett left me in the dust almost immediately, which ended up being a pretty smart decision.  Since I have never really ran more than 2 miles at one time (hi, I am not a runner) I was afraid to run too fast in the beginning and then crap out at the end, so I wanted to make sure I paced myself.  It turns out, however, that not getting ahead of the crowds during  “Fun Run” full of kids and old people and strollers (OMG dodging the strollers!) ends up being kind of a mistake if you are trying to run in a decent amount of time — live and learn.

So running the race took me about 45 minutes and although I won’t be winning any awards with that time, I am pretty stoked that we did it.  And you guys —  I ran the whole. damn. thing.

In all seriousness though, I think that I have to thank Crossfit for my performance — and by performance I mean Not Dying.  Like I said earlier I am not a runner, so I have never really forced myself to run very far.  A few weeks ago one of our WODs involved running a mile, lifting some weights, and then finishing it up by running another mile and I about died when I read that because  I was just SURE I wasn’t going to be able to do it.

But then one of the coaches said to me “You don’t have to do it fast, Holly — you just have to do it.”   And what the hell do you know?  I did it!  So during the 5k when I wanted to stop and walk or quit or whatever, I just said that over and over in my head.  I like a good mantra when I’m in pain.

Also, I turned up my music very loud.  I don’t know how people run without music.  It was a necessity to take my mind off of things.  Do you know what was playing when I crossed the finish line?   Only the cheesiest and best pop song ever!  And I found the lyrics to be quite apropos at the time.  I was so happy to cross that damn finish line you would have thought I just ran a marathon.  But I guess in a way it kind of was my marathon, ya know?  It was my first timed race ever, my first little shoe clippy thingy (the technical term, I’m sure), my first race bib and all that — and I enjoyed the heck out of all that silly stuff.  It was a measurable accomplishment and I was pretty proud of myself.  Also, I basically gave myself free reign to eat my weight in turkey and stuffing when I was done, so that was an awesome bonus!

Speaking of my weight — I woke up the day after Thanksgiving (of all days) and hit 50lbs lost.  Also another hat tip to Crossfit.  (The timing almost made me want to go back for some more stuffing!)  CAN YOU FREAKING BELIEVE THAT?  Because I can almost not even believe that.  I kind of can’t get over that number because when I look at myself I see the same person, but dude that is a lot of pounds lost.  In fact I’m not sure I have ever lost more than that EVER.  I feel pretty excited to keep going but since it is a notable pit stop on this journey to become as healthy as possible before we have kids, I think I’m just going to stop and enjoy the view for a while!

8 Responses to A Week of Big Accomplishments!