When my mother was 16, eagerly anticipating the independence that came in the form of a Volkswagen Beetle, she passed her drivers test. As she filled out the paperwork for what would be her first Drivers License she encountered the Universal DMV Dilemma of what to write for her weight. Ultimately she decided to lie as many of us do, and so she got ballsy and put down 112 lbs.  God forbid anyone find out she only weighed in at 104.
If I hadn’t seen the pictures from the hospital, I would question whether or not we were actually related.  I have never had the occasion to make myself appear less…skinny – not in real life, and certainly never on paper. I have always taken after my dad’s side of the family who embody their German heritage not only in their ability to empty a stein, but in their sturdy frames.

We looked a lot alike, my father and I – same hair, same eyes, same NFL lineman shoulders. If I had a brother, he would have spent his life envious.  Our legs could have been carved out of the same marble slab.  We were a formidable pair. 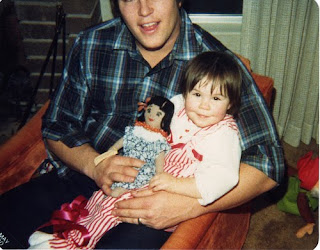 “Holy Shit, Holly, he looks like Conan the Barbarian,” Garrett said the first time he saw my parents wedding photo.  The fact that he never got to meet my father was surely a relief to him in some ways. 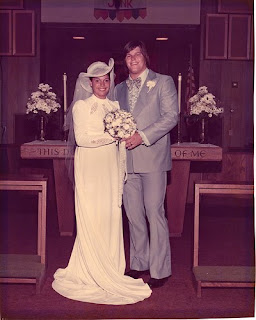 *Obviously Garrett meant Conan the Barbarian if he ditched the loin cloth and headdress for a baby blue tux and a paisley bowtie. God I love the 70s*

I understood what he meant but the comment made me cringe a bit because I recognized my own body in that picture and I thought of the words that I hoped my one day boyfriend would use to describe me, an Arnold Schwartzenegger character never came to mind.  But I was also proud of my father’s strength, and of the physique that he earned after decades of football.  I saw the aftermath of the NFL that they don’t discuss on SportCenter — the bruises, the surgeries.


But my career goals never involved the NFL, so I’ve definitely struggled a bit to love this body I was gifted. I’ve told you before about my childhood foray into dance, and as a dancer my body was never a perfect fit.  Despite dedication and passion, I learned at a very early age that my body would prevent any chance I would ever have at that profession no matter how many times I casually hugged the toilet, but just in case I should try to lose about 20 lbs. I think I was 9 when this sunk in.
Though no Swan Queen, my imperfect body has done unbelievable things for me and as someone who hopes to have children one day I look to the future now and think of all the things my body is still going to do for me – what it is capable of doing for me, and I have begun to appreciate it.  When I think of the plans I have it’s hard not to feel a little proud. Sure my body isn’t perfect, and I have definitely gotten the memo that it isn’t The Ideal (Loud and Clear! Thank you, American Media!) But this body is mine, and the narcissist inside of me finds that hard not to love.  And this is mostly why I was pretty disgusted with Fat Girl, Judith Moore’s autobiographical account of her life growing up fat.

Though chock full of writing that will just absolutely knock your socks off, she spends page after page discussing herself with such disdain. She wrote an interesting commentary about why she wrote the book, and although the book is refreshing in its frankness, I am also finding it very hard to read. Writing about something that generally doesn’t have a voice deserves praise, but having that voice be so incredibly disparaging is hard for someone with my history to reconcile, and ultimately it doesn’t accomplish much.  The only place the story goes is down 30 floors to the basement of your worst shame spiral, and yet  there is nothing earned for the trip.


I don’t need every book to have a silver lining lesson, but every few pages I find it difficult to not immediately set the book down, and whisper to that little dreamer inside of her that it doesn’t matter if the world doesn’t thinks you are perfect.  Everything will work out just as it should – even if it doesn’t end up looking quite as much like Flashdance as you once hoped it would.