Brussels Sprouts with Bacon and Walnuts

Ah, Brussels Sprouts! Nature’s cruciferous little cast-off.   How can you hate something that is so cute??? 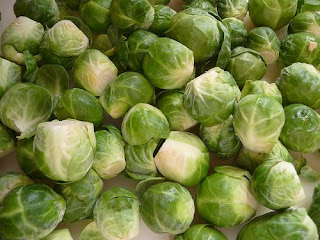 Growing up in my house, brussels sprouts (and please note the ‘s’ at the end of brussel so that you won’t be rudely corrected by some bitchy cooking aficionado as I was) were strictly verboten. My father had an unfortunate choking incident with them after being forced to eat them as a child, and let me tell you if there is anything more powerful than a traumatic childhood food memory, I don’t know what it is.

Just about everyone I’m acquainted with has some story about a time they were forced to eat something, and now as adults they staunchly refuse to partake if for no other reason than ‘because they can.’ As a child this meant no brussels sprouts in our house, at the request of my father, and no seafood of any kind at the request of my mother. The latter is kind of a humorous story for another time, but rest assured I have all but overcome my mother’s hatred of fish and now could live happily as a pescetarian.

But today I want to talk about brussels sprouts.  Deeply delicious brussels sprouts.  And if right now you are thinking that I am at least one card short of a full deck — I urge you to resist judgment, at least until the end of this post.  I mean, it involves bacon, people.  We can reserve judgment if it involves bacon, can’t we?  Okay, so let’s get started with these little delicacies…

So the first rule of Brussels Sprouts Club is Never Talk About Bruss…wait, that’s not right.

The first rule is No Boiling or Steaming.   If I can impart even a small culinary nugget of widom on you today, let it be this:  If you think you do not like a vegetable, please try it roasted at a high temperature with a little olive oil, salt, and pepper.  If you think you REALLY don’t like a vegetable — roast it in bacon drippings.   This is sound advice, I swear. 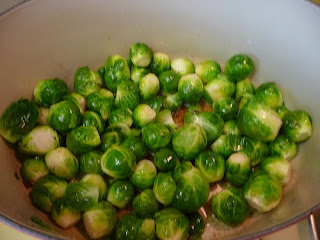 You see that shiny goodness on your brussels?  That is the magic of bacon!  And it is the result of you rendering about 8 slices of chopped up bacon (or “lardonnes” if you want to be snooty about it) in an oven proof pot or pan (I use a 7 qt Dutch Oven) and then removing those slices of bacon and adding about 2lbs of cleaned brussels sprouts.  While you are at it, give them a little shower of salt and pepper…and don’t be shy about it.  Good seasoning is key here — especially with the salt.

At this point you are going to pop that bad boy in a pre-heated 400 degree oven for about 30 minutes — and the trick here is that you want the sprouts to be in a single layer so they actually roast, not steam.  Steaming makes for a soggy sprout and we want ours to be crusty and delicious when it’s done.  After about 30 minutes your sprouts should be cooked but not completely browned, and at this point you will take them out and throw in what is left of the bacon bits you rendered earlier (c’mon…you know a couple of those pieces made it into your belly, you are only human after all).  Then you want to throw in a little more than a handful of chopped walnuts (whatever looks good to you, you can’t screw that part up) and put them back in the oven altogether for another 10 minutes.

After 40 minutes of roasting they will look about like this: 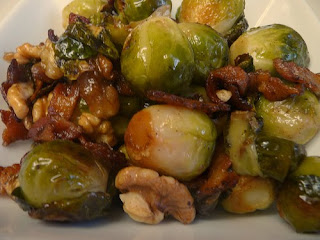 And they will smell even more incredible!  At this point, Garrett and I just grab forks and go straight for the pot.  I will assume you are far more civilized than we are, but if not — I really can’t blame you.
Caramely, nutty, roasty, and of course BACON-Y people, BA-CON-Y.  I just can’t emphasize that enough.
Can you give them another shot?  Seriously.  This recipe might change your life.
Thanks for subscribing!

5 Responses to Brussels Sprouts with Bacon and Walnuts