Wow! Has an entire year passed already? That was qu-ick! It’s been a good one though — A Year of Firsts! And of course filled with friends, family and lots of travel, so I thought I’d do a quick little recap.

January started off with a bang — of thunder that is! The weather last year was definitely XXXXTREME and I resolved to be a little less extreme with how I spent my free time. I wanted to read more (which I definitely did) and see more movies (TOTAL FAIL). Overall I did okay with the 2008 Resolutions, although you know I’ve got more coming for 2009 (I’m still kind of marinating on them — post forthcoming).

January also brought that “incident” wherein I “lost” my second laptop at work, only to find out 2 weeks later that my co-worker had seen it on my desktop and locked it up in a “secure” spot, only to promptly forget about it.

February was fun and rough all at the same time. Garrett and I celebrated a lovely Valentine’s Day out in the wineries in Plymouth… …and it was so enjoyable that I came home and promptly GOT THE FLU! (Thank you St. Valentine.) I was down for the count for over 7 days and it is by far the sickest I have been in decades. March held some highs and some lows. Unfortunately Garrett and I took our first plane trip of the year down to San Diego for a funeral. His Uncle’s passing was sudden and unexpected; in the end, however, the visit really allowed Garrett to do some connecting with his family and for me to meet some of those family members for the first time — which was a real blessing! Plus there was Rock Band! And we all know that no one can have a bad time when they are playing Rock Band!

April started off a year that was full of fun filled family adventure! I really hope to repeat that in 2009. This year my extended family saw each other more than we have in many past years and it was SO! MUCH!FUN! As we all get older our times together just get so much more…well, FUN!

Our first gathering was in April when we headed down to Fremont to cheer on my cousin John who was graduating from the Police Academy. We were all incredibly proud, and as such had to throw a little party to show it, and some of us clearly took it more seriously than others… In May we celebrated Garrett’s 27th birthday, which always makes me happy! Of course, because it is the day he was born — but ALSO, because for the next 6 months it looked like he was only 2 years younger than me, instead of 3. (I’m a cougar in training — ROWR! haha NOT really.) I also found myself down in San Diego for work, and what better town to be stuck “working” in because my cousin Jenny lives down there. We really got to just lay low and hang out, which was great! I got to spend time at the beach, plus we went out on the town with some of her friends one night, which was just what I needed after a hard week of working: After coming back from San Diego, Garrett and I went to a wedding here in Sacramento for two of his good friends who are from San Diego. Try and keep all that straight in your head! Anyway, it was a beautiful wedding, and by far the biggest one we have ever been to (there were hundreds of people there)– and — it was the first time Garrett has ever been a groomsman. As one who is always the bridesmaid around here, I found that novel and so of course I took way too many pictures. But seriously, how could I not when there were so many handsome dudes in tuxes walking around? In June we were back down in San Diego again (I know, right? Do you see a trend?) for Garrett’s cousin Davin’s wedding. I think the Universe is telling us to buy a vacation home down there by the beach, but that is just my opinion. It was another fun filled family affair with EVEN! MORE! FAMILY! this time. The wedding was somewhat untraditional (the bride wore yellow, and they walked down the aisle to the theme from Indiana Jones) but the emotions were all the same. Lots of love in the park that day — and also DELICIOUS paella! We also spent June discovering discovering a fantastic band, as well as watching Garrett’s uncle get his degree from Cal State East Bay.
We were super proud of Johnny’s accomplishment and so we had to do some celebrating! July was a whirlwind of travel and music — just how I like it! We headed down to Monterey for the 4th of July where it was so cold I had to wear a scarf out to watch the fireworks! It was a welcomed relief after the mid-summer Sacramento heat, and as always it was SO FUN to spend time with my cousins (plus Sara and Paul were FANTASTIC hosts!) The following week we headed down to Los Angeles to see one of our favorite bands perform and to see some old friends. We rented a Prius, made some great mix cds, and headed down the highway! Even though it was a quick and dirty trip and we pretty much ate our way through So Cal, it was SUCH A BLAST!

I also celebrated my 100th blog post here, and as such felt compelled to tell you all about my purchase of the world’s smallest pair of underwear, and I also recapped what a crazy band The Red Elvises are after we caught their show at Old Ironsides.

And to end the month we headed over to Sonoma to help my cousin Jim celebrate his 31st Birthday by wine tasting on bikes! (It seemed like a good idea at the time…haha) It was a really special day and we were all lucky to have gotten to celebrate with him! So in August I had to take a vacation! 🙂 Unfortunately it was not the kind of vacation you really want to take. I had a GIGANTIC presentation in September to prepare for in the Emerging Leaders Program that I spent all of 2008 participating in at work, and as such, I spent August preparing for that presentation. I sort of took a vacation from my life and was eating, sleeping, and breathing work. The end result was phenomenal though, and I’m so happy that I participated in the ELP program. If the only price I had to pay was giving up one month of leisure activities, I would do it all over again in a heartbeat!

September was filled with reunions of sorts. The first was that I reunited with my social life! And then quickly thereafter with two of my good friends from high school. My friend Natalie married her sweetheart Irwin in a beautiful ceremony down in the Bay Area, and I got to see her family (who I hadn’t seen in ages) and my good friend Jen and her main-man Will (who I also hadn’t seen in ages). 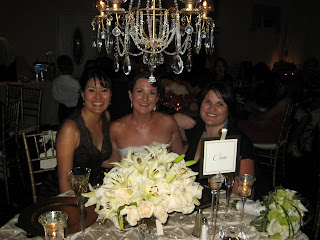 I also reunited with my family as we spent an incredibly raucous weekend (after an incredibly stressful but succesful presentation at work) at The Cabin up in Arnold — aka “The Treehouse”. How can you be stressed when you have a cold beer in your hand and this is your backdrop? And I wasn’t. That is until we all heard on the news that our cousin Ned was getting canned? WTF, Milwuakee?????

Continuing with the family news, my aunts got married (score!) up in Chico and we all got to celebrate…with the absolute best signature cocktails, I might add.

And as an absolute non-sequiter, I also came to the realization that my boyfriend has a doppleganger. Who knew?

Holy Moly, what a month!

I moved into a cute new Bachelorette Pad. My first time ever living alone!

I turned 30 and threw an amazing party where I got to hang with all of my family and friends.

And Garrett and I revisited our roots by dressing up as Peet’s employees for Halloween.

Considering it was the place we fell in love, I was more than happy to relive those days!

…and beyond that, hoo boy, I slept! Because moving and throwing a party in a two week period can really exhaust you!

November saw history being made, and I think we will all remember where we were and how we felt when Barack Obama got elected — no matter who you voted for. Garrett and I spent the evening together, and I (of course) just bawled through his speech. His charisma and ability to bring people together are exciting, and for the first time in years I have felt hope when it comes to politics in this country.

I also celebrated my three year anniversary with Garrett and finally got around to telling the second half of our love story. I can’t wait to spend the rest of my life with that man, and I feel incredibly lucky to have found him all those years ago!

Lastly, I took a crazy sailing trip for work AND SURVIVED! I wasn’t sure how I would do, but in the end it was more fun than I could have asked for, and I feel pretty lucky at the end of this year, not only to have a job, but to have a job that requires me to hop on sailboats and check out views like this: 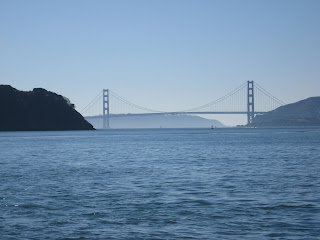 This December has gone by faster than any I can remember in recent history. Did you notice that too?

I traveled to LA for work, but also got to see a good friend (and eat the best! meal! ever!

I had a fun celeb sighting.

And of course celebrated Christmas with my family by eating way to much and sleeping on the couch. (Sorry no pics of that…haha)

But the best news by far was Garrett got a new job! And we are both so excited about what opportunities 2009 is going to bring for both of us. I hope you all enjoyed that little (er, rather, HUGE) Year in Review and I hope you have happy and safe New Year’s Celebrations this evening.

It has been an amazing year connecting with all of you through this blog and I can’t wait to see what 2009 brings!